Comments (0)
Add to wishlistDelete from wishlist
Cite this document
Summary
The paper "The Place of Party Identification in Explaining Voting Behaviour in Australia" states that Democrats and Greens are far more likely to receive the votes of the young than either major party in Australia, a phenomenon repeated for green parties elsewhere…
Download full paperFile format: .doc, available for editing
HIDE THIS PAPERGRAB THE BEST PAPER94.3% of users find it useful 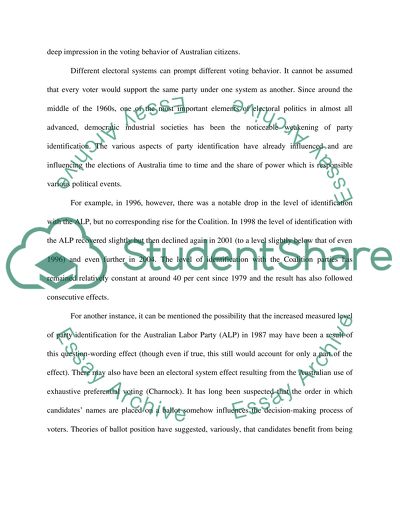 Opinion and Voting Behavior in 2012 Elections

6 Pages(1500 words)Assignment
sponsored ads
Save Your Time for More Important Things
Let us write or edit the assignment on your topic "The Place of Party Identification in Explaining Voting Behaviour in Australia" with a personal 20% discount.
GRAB THE BEST PAPER

Let us find you another Assignment on topic The Place of Party Identification in Explaining Voting Behaviour in Australia for FREE!