Comments (0)
Add to wishlist Delete from wishlist
Cite this document
Summary
Social Construction of Crime Crime is deemed as an act that breaks the provisions of the set law and its social construction varies from society to society as well as the time and the law (Sanders & Young 2010, p. 1). The crime is therefore defined by the society’s own rules, beliefs and norms that are in play at any given time in the history of the society…
Download full paper File format: .doc, available for editing
HIDE THIS PAPERGRAB THE BEST PAPER98.2% of users find it useful 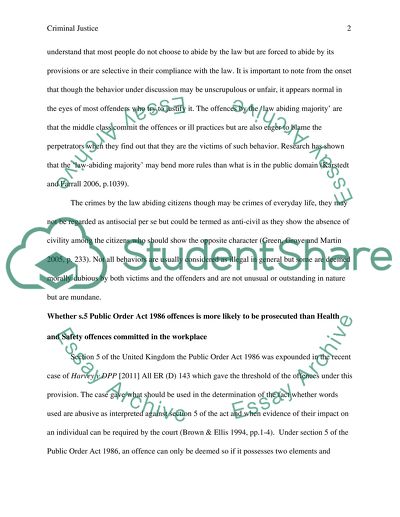 Download file to see previous pages This means that the legal status of a behavior whether defined as a crime or not is in not in the content of the behavior itself, but lies in the social response to the behavior in question and the changes in the legal status of the behavior can be brought about by the transitions in the society. It should also be noted that the social response to crime including numerous explanations for crime are based not only on the nature of the act itself but also on the moral and social standing of the offender as related to that of the victim. Further, it is noted that in the absence of any ontological reality of crime, there are tests that are used in the construction of crime, one of which is the test of intention to commit the crime known as Mens rea (Hillyard 2005a, p.9). There is an area of criminal activity that occurs in the current society that involve crimes and unfair practices that are committed in the society and are usually committed by people who see themselves as law abiding and who would readily reject the label of being criminals (Karstedt & Farrall 2007, p.7). They are known as the ‘law-abiding majority’ but they fail to understand that most people do not choose to abide by the law but are forced to abide by its provisions or are selective in their compliance with the law. It is important to note from the onset that though the behavior under discussion may be unscrupulous or unfair, it appears normal in the eyes of most offenders who try to justify it. The offences by the ‘law abiding majority’ are that the middle class commit the offences or ill practices but are also eager to blame the perpetrators when they find out that they are the victims of such behavior. Research has shown that the ‘law-abiding majority’ may bend more rules than what is in the public domain (Karstedt and Farrall 2006, p.1039). The crimes by the law abiding citizens though may be crimes of everyday life, they may not be regarded as antisocial per se but could be termed as anti-civil as they show the absence of civility among the citizens who should show the opposite character (Green, Grove and Martin 2005, p. 233). Not all behaviors are usually considered as illegal in general but some are deemed morally dubious by both victims and the offenders and are not unusual or outstanding in nature but are mundane. Whether s.5 Public Order Act 1986 offences is more likely to be prosecuted than Health and Safety offences committed in the workplace Section 5 of the United Kingdom the Public Order Act 1986 was expounded in the recent case of Harvey v DPP [2011] All ER (D) 143 which gave the threshold of the offences under this provision. The case gave what should be used in the determination of the fact whether words used are abusive as interpreted against section 5 of the act and when evidence of their impact on an individual can be required by the court (Brown & Ellis 1994, pp.1-4). Under section 5 of the Public Order Act 1986, an offence can only be deemed so if it possesses two elements and include the fact that a person must have made use of intimidating, insulting or offensive words or behavior. Further, the behavior must have been disorderly or have displayed any writing, sign or a visible representation that will be ...Download file to see next pages Read More
Share:
Tags
Cite this document
(“Should the 'crimes' of the 'law-abiding majority' be criminalised more Essay”, n.d.)
Should the 'crimes' of the 'law-abiding majority' be criminalised more Essay. Retrieved from https://studentshare.org/law/1490637-should-the-crimes-of-the-law-abiding-majority-be

“Should the 'crimes' of the 'law-Abiding majority' Be Criminalised More Essay”, n.d. https://studentshare.org/law/1490637-should-the-crimes-of-the-law-abiding-majority-be.
Comments (0)
Click to create a comment or rate a document

For instance, in Partridge v Crittenden, it was held that an advertisement is tantamount to an invitation to treat (Partridge v Crittenden, 1968). However, there are exceptions, where an advertisement is considered to be an offer. An example is provided by the Carbolic Smoke Ball case. In this case, the defendant’s contention that its newspaper advertisement was not an offer was rejected by the court; as the plaintiff had complied with the terms of the offer (Carlill v Carbolic Smoke Ball Co, 1892).
Thus, the advertisement placed by Adams in the local newspaper is an invitation to treat and not an offer, as per the case law discussed above. It is to be determined, whether Adam had formed legally binding contracts with C...
6 Pages (1500 words) Case Study
sponsored ads
Save Your Time for More Important Things
Let us write or edit the essay on your topic "Should the 'crimes' of the 'law-abiding majority' be criminalised more frequently" with a personal 20% discount.
GRAB THE BEST PAPER

Let us find you another Essay on topic Should the 'crimes' of the 'law-abiding majority' be criminalised more frequently for FREE!