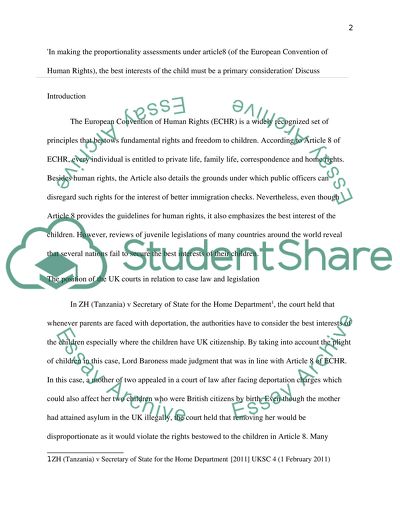 Download file to see previous pages Nevertheless, even though Article 8 provides the guidelines for human rights, it also emphasizes the best interest of the children. However, reviews of juvenile legislations of many countries around the world reveal that several nations fail to secure the best interests of their children. The position of the UK courts in relation to case law and legislation In ZH (Tanzania) v Secretary of State for the Home Department1, the court held that whenever parents are faced with deportation, the authorities have to consider the best interests of the children especially where the children have UK citizenship. By taking into account the plight of children in this case, Lord Baroness made judgment that was in line with Article 8 of ECHR. In this case, a mother of two appealed in a court of law after facing deportation charges which could also affect her two children who were British citizens by birth. Even though the mother had attained asylum in the UK illegally, the court held that removing her would be disproportionate as it would violate the rights bestowed to the children in Article 8. Many governments are presently considering amending their immigration rules in order to have a clear legal framework in respect of a child’s best interest in any removal case. Notably, the interests of a child according to Moreham are taken care of where a child is allowed to remain with the parents in case of leaving the country.2 However, where a child is born in a country in which the parents are not domiciled and the state wishes to remove the parents, then the child can be granted temporary stay based on circumstances that best serve interest such as education or health. In Britain, for a child to be granted permanent residence after extradition of the parents, Thym observes that such a child must have been a resident for not less than six years.3 The position of the UK and the criteria used in discharging its duties and proportionality in protection of minors Under the UK immigration laws, the interests of children must be taken care of and therefore any British court should establish the reasonableness of moving a child to another country. The UK immigration Act 1971 prohibits removal of British citizens. However, in a situation where a non-citizen parent is forcefully removed and decides to move with the children, then the children will have no option but to move with the parent. Nevertheless, these children remain British citizen not only by virtue of birth, but also because they have been resident of UK in the course of their lives. Disappointingly, such children will not enjoy the privileges of growing in their own culture and therefore in carrying out proportionality assessment, the British legal system emphasizes that the best interest of a child must remain a key consideration. Where interest of a child is outweighed by other considerations and in a situation that demands strict adherence to immigration controls, Lord Hope argued that moving children to another country would be tantamount to making them lose the benefits of UK citizenship for the rest of their lives. Undeniably, there is an ensuing tension between provisions of ECHR and how the European Court of Human ...Download file to see next pages Read More
Share:
Tags
Cite this document
(“Immigration law Essay Example | Topics and Well Written Essays - 1500 words”, n.d.)
Immigration law Essay Example | Topics and Well Written Essays - 1500 words. Retrieved from https://studentshare.org/law/1475087-immigration-law

CHECK THESE SAMPLES OF Immigration law

For example, for farming communities, fertile and well-watered land has been a pull factor in migration. Business opportunities and political stability are also examples of pull factors.
Since the turn of the 20th century, Great Britain and Northern Ireland have experienced a great influx of foreigners migrating into the country due to pull or push factors. There have been different waves of migrations to the United Kingdom, which has had different impacts. Because of this, the United Kingdom has had to respond in several ways, which includes coming up with new acts on immigration, nationality, and providing asylum to refugees.1 However, the topic of migration to the United Kingdom has attracted different political views and...
23 Pages (5750 words) Assignment
sponsored ads
Save Your Time for More Important Things
Let us write or edit the essay on your topic "Immigration law" with a personal 20% discount.
GRAB THE BEST PAPER

Let us find you another Essay on topic Immigration law for FREE!