Comments (0)
Add to wishlistDelete from wishlist
Cite this document
Summary
Tort law Name Institution Date Tort Law Tort law is one of the widely applied laws in the English common law. It cuts across from the social to the professional fields. It is widely used as a measure to govern the people against any form of injury or harm from those people who are considered to be responsible of their well-being…
Download full paperFile format: .doc, available for editing
HIDE THIS PAPERGRAB THE BEST PAPER92% of users find it useful 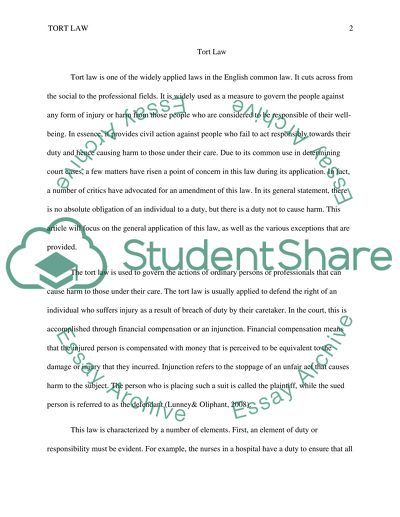 Download file to see previous pages In fact, a number of critics have advocated for an amendment of this law. In its general statement, there is no absolute obligation of an individual to a duty, but there is a duty not to cause harm. This article will focus on the general application of this law, as well as the various exceptions that are provided. The tort law is used to govern the actions of ordinary persons or professionals that can cause harm to those under their care. The tort law is usually applied to defend the right of an individual who suffers injury as a result of breach of duty by their caretaker. In the court, this is accomplished through financial compensation or an injunction. Financial compensation means that the injured person is compensated with money that is perceived to be equivalent to the damage or injury that they incurred. Injunction refers to the stoppage of an unfair act that causes harm to the subject. The person who is placing such a suit is called the plaintiff, while the sued person is referred to as the defendant (Lunney& Oliphant, 2008). This law is characterized by a number of elements. First, an element of duty or responsibility must be evident. For example, the nurses in a hospital have a duty to ensure that all the beds used by patients are comfortable and in order. Secondly, the element of negligence must exist. Negligence refers to the failure to implement the expected duties hence causing harm to the plaintiff. A good example is when a nurse fails to check the condition of a bed and it breaks down resulting in an injury to a patient. In such a case, it is obvious that the patient suffered injuries because the nurse failed to conduct their duties as expected (Lunney& Oliphant, 2008). Therefore, the implementation of this law requires that it is proven beyond doubt that the Offedant had a duty to offer care to the plaintiff but breached this duty. Also, there must exist a causative relationship between the damage and the negligent action. This means that the law only qualifies if the damage was a result of the breach of duty. Hence, the judge needs to establish that all these elements are present in the case before passing any judgment. In professional application, negligence refers to the failure to act in accordance with the set standards of the duties of a competent practitioner. For instance, the doctors must meet the set professional standards in medical practice. If any harm results from compromise of set standards, then the doctor would be liable (Lunney& Oliphant, 2008). In comparison to the Saudi law, the Tort English law is more efficient in defending the subjects of injury or damage. This is because it gives the plaintiff a privilege to act as an adequate witness in court. The major drawback in Saudi law is that the plaintiff is not allowed to testify. The subjects of the case are regarded as unreliable and biased witnesses. Therefore, the plaintiff is allowed only to provide written allegations before the court. On the other hand, the defendant is allowed to defend themselves orally. This is a disadvantage for the plaintiff as the Saudi law puts more weight on oral testimony than on written allegations. A good example is a case in Saudi court that involved a British citizen who had visited Saudi on vacation. He suffered a spinal injury as a result of being hit by an overgrown Coral while sitting on a wooden platform. The plaintiff lost the case. Other disadvantages in Saudi courts are lack ...Download file to see next pagesRead More
Share:
Tags
Cite this document
(“Tort law Essay Example | Topics and Well Written Essays - 1000 words”, n.d.)
Retrieved from https://studentshare.org/law/1472225-tort-law
(Tort Law Essay Example | Topics and Well Written Essays - 1000 Words)
https://studentshare.org/law/1472225-tort-law.
“Tort Law Essay Example | Topics and Well Written Essays - 1000 Words”, n.d. https://studentshare.org/law/1472225-tort-law.
Comments (0)
Click to create a comment or rate a document

CHECK THESE SAMPLES OF Tort law

New and complex issues have arisen which demanded fresh understanding and handling of cases involved them. This has resulted in the enhanced development of specialized laws e.g. cyber laws and interpretation of those laws. The same is true with Media Laws. Media has developed much in the last half-century. As it evolved as a profession and more people started to join it, there arose the levels of money involved in it. With this grew the contractual obligations on the parts of parties and concerned laws e.g. patent laws, privacy laws, and copyrights laws, etc. also started to play their parts. With these issues, the role of law in the media industry also reached a new height.
Mathew Fisher, the appellant, joined a band with Mr...
6 Pages(1500 words)Assignment
sponsored ads
Save Your Time for More Important Things
Let us write or edit the essay on your topic "Tort law" with a personal 20% discount.
GRAB THE BEST PAPER

Let us find you another Essay on topic Tort law for FREE!