Comments (0)
Add to wishlist Delete from wishlist
Cite this document
Summary
Adult and Juvenile Justice System The court system, in the U.S, has two divisions, the Juvenile Justice System and the Adult Criminal Justice System. This systems aim at ensuring the dispensation of justice…
Download full paper File format: .doc, available for editing
HIDE THIS PAPERGRAB THE BEST PAPER98% of users find it useful 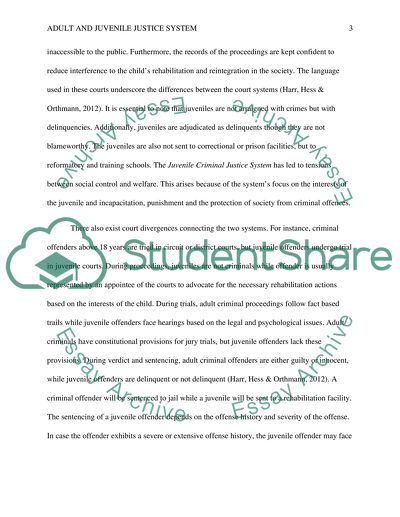 Download file to see previous pages The criminal justice system, in U.S, occurs as a system of activities and institutions that ensure social control. Criminal justice systems function to deter or mitigate the activities of criminals besides sanctioning law violators. These systems achieve these objectives through various strategies such as punishment, rehabilitation and criminal penalties. These criminal justice systems play essential roles in safeguarding the life and rights of the violators. These systems ensure that criminals do not face abuse from investigative and prosecuting officers. The American Judicial System has two divisions that serve criminals according to their judicial requirements. The Juvenile Justice System developed from the criminal courts systems 100 years ago (Harr, Hess & Orthmann, 2012). This separation was motivated by the goal of diverting juvenile offenders from the excessive and sometimes disparaging punishment of the adult criminal court system. The Juvenile Justice System encourages rehabilitation instead of punishment. The juvenile and adult criminal justice systems disagree in several ways. Comparison and contrast The Juvenile Justice System focuses on the juvenile in need of assistance instead of the act that brought the juvenile before the court. Juvenile criminal courts occur in an informal setting with the judge having discretion. In the juvenile system, the judge should act in the interests of the juvenile. As a result, the system does not have provisions for trial by jury, rights to know charges and right to an attorney. Additionally, the juvenile court proceedings are usually inaccessible to the public. Furthermore, the records of the proceedings are kept confident to reduce interference to the child’s rehabilitation and reintegration in the society. The language used in these courts underscore the differences between the court systems (Harr, Hess & Orthmann, 2012). It is essential to note that juveniles are not arraigned with crimes but with delinquencies. Additionally, juveniles are adjudicated as delinquents though they are not blameworthy. The juveniles are also not sent to correctional or prison facilities, but to reformatory and training schools. The Juvenile Criminal Justice System has led to tensions between social control and welfare. This arises because of the system’s focus on the interests of the juvenile and incapacitation, punishment and the protection of society from criminal offences. There also exist court divergences connecting the two systems. For instance, criminal offenders above 18 years are tried in circuit or district courts, but juvenile offenders undergo trial in juvenile courts. During proceedings, juveniles are not criminals while offender is usually represented by an appointee of the courts to advocate for the necessary rehabilitation actions based on the interests of the child. During trials, adult criminal proceedings follow fact based trails while juvenile offenders face hearings based on the legal and psychological issues. Adult criminals have constitutional provisions for jury trials, but juvenile offenders lack these provisions. During verdict and sentencing, adult criminal offenders are either guilty or innocent, while juvenile offenders are delinquent or not delinquent (Harr, Hess & Orthmann, 2012). A criminal offender will be sentenced to jail while a juvenile will be sent to a rehabilitation facility. The sentencing of a juvenile offender depends on the offense history and severity of the offense. In case the offender exhibits a severe or extensive offense history, the juvenile offender may face detainment for their safety and social stability. However, the juvenile off ...Download file to see next pages Read More
Share:
Tags
Cite this document
(“Adult and Juvenile Justice System Research Paper”, n.d.)
Adult and Juvenile Justice System Research Paper. Retrieved from https://studentshare.org/law/1469436-adult-and-juvenile-justice-system

CHECK THESE SAMPLES OF Adult and Juvenile Justice System

The tourism sector in Morocco has presented a strong growth of 6%, compared to a world average of 1.6% within the last decade (Alkhatib, 2008, Pp. 2). However, the tourism sector in Morocco must compete with other regional attractions, including those that are found in Egypt, which presented a growth rate of 20.6% for its tourism sector within the same period. The Vision 2010 strategy developed by the government in Morocco in the year 2001 in concert with the private sector targets attracting 10 million tourists compared to the 4.4 million in the year 2001 to generate...
15 Pages (3750 words) Research Proposal

In order to compare the welfare system of the three proposed countries, it is important to first develop a comparative method that would guide in comparing the three states. For the purpose of this paper, a binary comparison would be conducted. The implicit comparison would deal with Britain while the explicit comparison would explore the USA and Canada. Thereby a small N’ study would be used, that is, of three countries.
The three countries selected to share a similarity in the form that these countries are a welfare state. This is when welfare is mainly funded by the state. While the USA and Canada focus on the liberal welfare state, the welfare state of the UK is not quite defined.
The comparison of the welfare...
8 Pages (2000 words) Term Paper
sponsored ads
Save Your Time for More Important Things
Let us write or edit the research paper on your topic "Adult and Juvenile Justice System" with a personal 20% discount.
GRAB THE BEST PAPER

Let us find you another Research Paper on topic Adult and Juvenile Justice System for FREE!