Comments (0)
Add to wishlist Delete from wishlist
Cite this document
Summary
Law on Offer and Acceptance Name: Institution: Offer and Acceptance A contract is a legally binding agreement made between two or more parties; be it natural persons or a corporate body, which is enforceable in a court of law. The existence of a contract requires at the most basic level is the presence of an offer and an acceptance…
Download full paper File format: .doc, available for editing
HIDE THIS PAPERGRAB THE BEST PAPER95.1% of users find it useful 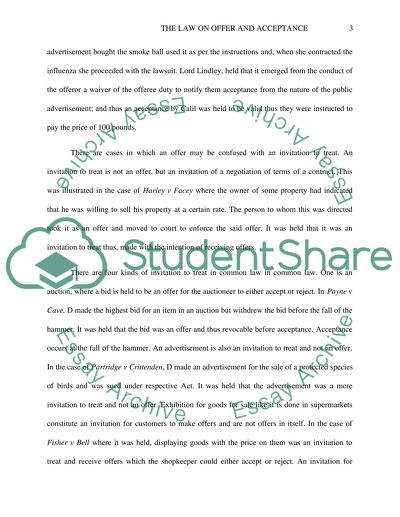 Extract of sample "Law an Offer and Acceptance"

Download file to see previous pages An offer can be defined as an expression of a willing to contract, on particular terms which becomes binding, upon the acceptance of the one to whom it was directed to. The expression of a contract generally means the form in which the contract is embodied in. It could be expressed in a letter, in the traditional sense, an email, fax and construed from the conduct of the offeror communicating the main grounds for the contract terms. The case of Smith v Hughes defines what entails intention to create legally binding agreement entails. It was held that the court objectively deduct an intention, not on the basis of the offeror’s intention per se but on the premise of what a reasonable man would construe as intention. However, beyond the classic definition of an offer being a bilateral expression of willingness to contract; there are instances in which the court has interpreted unilateral contract and held that they were legally binding. An excellent example emerges from the case of Calil v Carbolic Smoke Ball Company. In this case, the smoke ball company, made an advertisement in the newspaper stating that it will give a reward of 100 pounds for anybody who used the smoke ball as prescribed and still gets influenza, a cold or a related disease. Calil on seeing the advertisement bought the smoke ball used it as per the instructions and, when she contracted the influenza she proceeded with the lawsuit. Lord Lindley, held that it emerged from the conduct of the offeror a waiver of the offeree duty to notify them acceptance from the nature of the public advertisement; and thus an acceptance by Calil was held to be valid thus they were instructed to pay the price of 100 pounds. There are cases in which an offer may be confused with an invitation to treat. An invitation to treat is not an offer, but an invitation of a negotiation of terms of a contract. This was illustrated in the case of Harley v Facey where the owner of some property had indicated that he was willing to sell his property at a certain rate. The person to whom this was directed took it as an offer and moved to court to enforce the said offer. It was held that it was an invitation to treat thus, made with the intention of receiving offers. There are four kinds of invitation to treat in common law in common law. One is an auction, where a bid is held to be an offer for the auctioneer to either accept or reject. In Payne v Cave, D made the highest bid for an item in an auction but withdrew the bid before the fall of the hammer. It was held that the bid was an offer and thus revocable before acceptance. Acceptance occurs at the fall of the hammer. An advertisement is also an invitation to treat and not an offer. In the case of Partridge v Crittenden, D made an advertisement for the sale of a protected species of birds and was sued under respective Act. It was held that the advertisement was a mere invitation to treat and not an offer. Exhibition for goods for sale like it is done in supermarkets constitute an invitation for customers to make offers and are not offers in itself. In the case of Fisher v Bell where it was held, displaying goods with the price on them was an invitation to treat and receive offers which the shopkeeper could either accept or reject. An invitation for tenders is the last example of invitations to treat and not an offer. Response to the tenders is the offers that the person who advertised the tenders can either accept or ...Download file to see next pages Read More
Share:
Tags
Cite this document
(“Law an Offer and Acceptance Essay Example | Topics and Well Written Essays - 1500 words”, n.d.)
Retrieved from https://studentshare.org/law/1448799-contract-and-acceptance-law

CHECK THESE SAMPLES OF Law an Offer and Acceptance

New and complex issues have arisen which demanded fresh understanding and handling of cases involved them. This has resulted in the enhanced development of specialized laws e.g. cyber laws and interpretation of those laws. The same is true with Media Laws. Media has developed much in the last half-century. As it evolved as a profession and more people started to join it, there arose the levels of money involved in it. With this grew the contractual obligations on the parts of parties and concerned laws e.g. patent laws, privacy laws, and copyrights laws, etc. also started to play their parts. With these issues, the role of law in the media industry also reached a new height.
Mathew Fisher, the appellant, joined a band with Mr...
6 Pages (1500 words) Assignment
sponsored ads
Save Your Time for More Important Things
Let us write or edit the essay on your topic "Law an Offer and Acceptance" with a personal 20% discount.
GRAB THE BEST PAPER

Let us find you another Essay on topic Law an Offer and Acceptance for FREE!