Comments (0)
Add to wishlist Delete from wishlist
Cite this document
Summary
Commercial Law Problem 1- Leather Craft agreed to buy a quantity of leather from Cattle rear Ltd and have paid the full price of ?20,000 in advance. They have now been notified that Cattle rear Ltd has gone into liquidation. The leather has not been delivered…
Download full paper File format: .doc, available for editing
HIDE THIS PAPERGRAB THE BEST PAPER98.8% of users find it useful 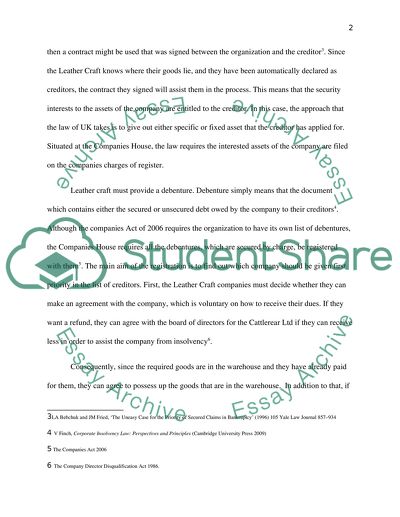 Download file to see previous pages If the organization decides that they want a refund of their money or the leather, then they are a few steps to be followed. First and fore most, since the organization has already been notified that the company is being liquidated, they automatically become a trustee1. This is in relation to the Bankruptcy and Insolvency Act. In the United Kingdom, the law that is responsible for dealing with both individuals and firms that face bankruptcy or insolvency is the Insolvency Law of the United Kingdom. There are key statutes that are involved in the bankruptcy and insolvency act. These include the Insolvency act 1986 which was amended by the Enterprise Act 2002, the Companies Act 2006 and the Company Director Disqualification Act 19862. The pari passu is the essential procedure that dictates how the goods will be distributed among the creditors in the UK insolvency law. Unless the statute displays preferred creditors, then a contract might be used that was signed between the organization and the creditor3. Since the Leather Craft knows where their goods lie, and they have been automatically declared as creditors, the contract they signed will assist them in the process. This means that the security interests to the assets of the company are entitled to the creditor. In this case, the approach that the law of UK takes is to give out either specific or fixed asset that the creditor has applied for. Situated at the Companies House, the law requires the interested assets of the company are filed on the companies charges of register. Leather craft must provide a debenture. Debenture simply means that the document which contains either the secured or unsecured debt owed by the company to their creditors4. Although the companies Act of 2006 requires the organization to have its own list of debentures, the Companies House requires all the debentures, which are secured by charge, be registered with them5. The main aim of the registration is to find out which company should be given first priority in the list of creditors. First, the Leather Craft companies must decide whether they can make an agreement with the company, which is voluntary on how to receive their dues. If they want a refund, they can agree with the board of directors for the Cattlerear Ltd if they can receive less in order to assist the company from insolvency6. Consequently, since the required goods are in the warehouse and they have already paid for them, they can agree to possess up the goods that are in the warehouse. In addition to that, if the company goes under new administration, this is according to the Enterprise Act of 2002 in which a trained insolvency practitioner will take up as new administration7. If this happens, since the specific goods that the Leather Craft industry wants are in the warehouse, they can agree with the new Cattlerear ltd administrator to have their goods, which are located in the warehouse. However, if none of these procedures are taken up, then all the assets of the companies can be sold and the Leather Craft industry can have their refund back if they do not want the leather that the Cattlerear has which is located in their warehouse. This is after the Leather Craft Industry has completed either forms that display that they owe the company the goods and that they want a refund of their money back or their goods in which they are aware they are located in the warehouse. It should be noted that if a qualified insolvency prac ...Download file to see next pages Read More
Share:
Tags
Cite this document
(“Commercial Law Essay Example | Topics and Well Written Essays - 2500 words”, n.d.)
Retrieved de https://studentshare.org/law/1446643-commercial-law-leathercraft-is-a-partnership-set

CHECK THESE SAMPLES OF Commercial Law

New and complex issues have arisen which demanded fresh understanding and handling of cases involved them. This has resulted in the enhanced development of specialized laws e.g. cyber laws and interpretation of those laws. The same is true with Media Laws. Media has developed much in the last half-century. As it evolved as a profession and more people started to join it, there arose the levels of money involved in it. With this grew the contractual obligations on the parts of parties and concerned laws e.g. patent laws, privacy laws, and copyrights laws, etc. also started to play their parts. With these issues, the role of law in the media industry also reached a new height.
Mathew Fisher, the appellant, joined a band with Mr...
6 Pages (1500 words) Assignment
sponsored ads
Save Your Time for More Important Things
Let us write or edit the essay on your topic "Commercial Law" with a personal 20% discount.
GRAB THE BEST PAPER

Let us find you another Essay on topic Commercial Law for FREE!