Comments (1)
Add to wishlistDelete from wishlist
Cite this document
Summary
The study explores the case of Geoffery Jack vs Wessex City Council. It would aim at answering these research questions: What were the material facts in the case? Which technique(s) of statutory interpretation, rules of language and/or presumptions that Lord Hoffmann employed in the case?…
Download full paperFile format: .doc, available for editing
HIDE THIS PAPERGRAB THE BEST PAPER93.6% of users find it useful 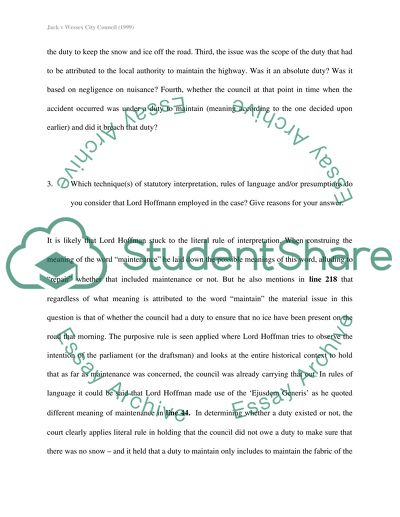 Download file to see previous pages According to the research findings, it can, therefore, be said that the legal issues, in this case, were as follows: first, the council argued that under Section 41(1) of the Highways Act 1980 it was only under a duty to maintain the highway and this duty did not extend to, as Mr. Jack alleged, keeping the road free of snow and frost at all times. Second, the issue was to construe the exact meaning of the word “maintenance” and whether it could contain the duty to keep the snow and ice off the road. Third, the issue was the scope of the duty that had to be attributed to the local authority to maintain the highway. Was it an absolute duty? Was it based on negligence on nuisance? Fourth, whether the council at that point in time when the accident occurred was under a duty to maintain (meaning according to the one decided upon earlier) and did it breach that duty. It is likely that Lord Hoffman stuck to the literal rule of interpretation. When construing the meaning of the word “maintenance” he laid down the possible meanings of this word, alluding to “repair” whether that included maintenance or not. But he also mentions in line 218 that regardless of what meaning is attributed to the word “maintain” the material issue in this question is that of whether the council had a duty to ensure that no ice has been present on the road that morning. The purposive rule is seen applied where Lord Hoffman tries to observe the intention of the parliament (or the draftsman) and looks at the entire historical context to hold that as far as maintenance was concerned, the council was already carrying that out. In rules of language, it could be said that Lord Hoffman made use of the ‘Ejusdem Generis’ as he quoted different meaning of maintenance in line 44. In determining whether a duty existed or not, the court clearly applies literal rule in holding that the council did not owe a duty to make sure that there was no snow – and it held that a duty to maintain only includes maintaining the fabric of the road and not to make sure no snow was ever present on the surface. Lastly, from line 156 to line 190 the court seems to be operating on the presumption that the common law has not changed and no legislation (1959 or 1980) purposed to change the common law, instead of subsequent acts only codified it. There is evidence that Lord Hoffman referred to the long title of the Highway Act 1980 and that constitutes an intrinsic aid in statutory interpretation. Other intrinsic aids that he alluded to were the definitional section contained in the act itself. ...Download file to see next pagesRead More
Share:
Tags
Cite this document
(“Geoffery Jack vs Wessex City Council Coursework”, n.d.)
Retrieved de https://studentshare.org/law/1441678-legal-method
(Geoffery Jack Vs Wessex City Council Coursework)
https://studentshare.org/law/1441678-legal-method.
“Geoffery Jack Vs Wessex City Council Coursework”, n.d. https://studentshare.org/law/1441678-legal-method.
Comments (1)
Click to create a comment or rate a document

em
emilybins added comment 1 year ago
Student rated this paper as
I had an issue with a coursework types of works. All until I came across this website and this particular paper. Even though "Geoffery Jack vs Wessex City Council" is far from my studies, the structure is so great that I use it all the time as an example for my own works.

CHECK THESE SAMPLES OF Geoffery Jack vs Wessex City Council

... addressed the determinants of bank performance (Athanasoglou et al., 2005). This paper will examine the level of profitability of Gulf Cooperation Council (GCC) banks. The relevance of this study lies in the careful examination of the profitability factor and how it is determined in the banks of the GCC, which consists of Saudi Arabia, the United Arab Emirates (UAE), Oman, Bahrain, Qatar, and Kuwait. AIMS AND OBJECTIVES OF THE STUDY There are various factors that materially determine a bank’s profitability. Accordingly, this paper sheds light on the different internal and external factors on which the GCC profitability is dependent. In order to determine these factors, it is important to look at the degree of banking profitability...
13 Pages(3250 words)Case Study

The main differences between the approaches made by American society and the Barbarian society were the purpose behind the invasions. The American society invaded Afghanistan after facing violent attacks from the Islamic anti-social groups. However, the Barbarian invasions in Rome signified the use of power by the leaders in order to capture territories and increase their kingdom. The main purpose behind the attacks made by the U.S. administration was to eliminate the terrorist groups from the world and make the world free f...
10 Pages(2500 words)Essay
sponsored ads
Save Your Time for More Important Things
Let us write or edit the coursework on your topic "Geoffery Jack vs Wessex City Council" with a personal 20% discount.
GRAB THE BEST PAPER

Let us find you another Coursework on topic Geoffery Jack vs Wessex City Council for FREE!