Jurisprudence: There is no such thing as Quaker law - Essay Example

Comments (0)
Add to wishlist Delete from wishlist
Cite this document
Summary
Name Instructor Task Date Jurisprudence: “There is no such thing as Quaker law.” Introduction According to Finns1 law involves operating using rationale, recognizing and working with this law to the benefit of universal good and human rights. Quakerism as defined by Clarkson is the practical application of Christianity, living a life bond by the gospel and separated from man’s ways…
Download full paper File format: .doc, available for editing
HIDE THIS PAPERGRAB THE BEST PAPER98.3% of users find it useful 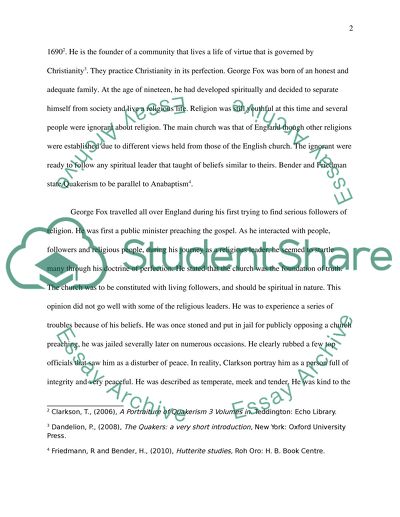 Extract of sample "Jurisprudence: There is no such thing as Quaker law"

Download file to see previous pages Are Quakers a community? Quakers have forever endured prejudice and misunderstanding and to understand this community, I must put to light the doctrines and life of the founder of Quakerism. Quakerism is traced to the sixteenth century. The founder is believed to be George Fox who lived from 1624 to 16902. He is the founder of a community that lives a life of virtue that is governed by Christianity3. They practice Christianity in its perfection. George Fox was born of an honest and adequate family. At the age of nineteen, he had developed spiritually and decided to separate himself from society and live a religious life. Religion was still youthful at this time and several people were ignorant about religion. The main church was that of England though other religions were established due to different views held from those of the English church. The ignorant were ready to follow any spiritual leader that taught of beliefs similar to theirs. Bender and Friedman state Quakerism to be parallel to Anabaptism4. George Fox travelled all over England during his first trying to find serious followers of religion. He was first a public minister preaching the gospel. As he interacted with people, followers and religious people, during his journey as a religious leader, he seemed to startle many through his doctrine of perfection. He stated that the church was the foundation of truth. The church was to be constituted with living followers, and should be spiritual in nature. This opinion did not go well with some of the religious leaders. He was to experience a series of troubles because of his beliefs. He was once stoned and put in jail for publicly opposing a church preaching, he was jailed severally later on numerous occasions. He clearly rubbed a few top officials that saw him as a disturber of peace. In reality, Clarkson portray him as a person full of integrity and very peaceful. He was described as temperate, meek and tender. He was kind to the less fortunate; a trait the world recognizes honorable with the Quaker community to this day. He understood and protected humanities interest. He protested in opposition to capital punishment in his numerous letters to judges. He told his followers to be temperate and kind to their slaves and urged them to grant liberty to them. Officers of the law who attended his sermons trying to arrest him, walked away on realizing his true nature, humble and a peacemaker. He had written numerous books about his teachings. He paid attention to things nearly everyone of the world considered of little significance. He was against world pleasures, music of any form, flattery. He approved plain language. It is on this points that the early community of Quakers was formed. The Quaker society is seen as to oppose the world but to them they see it as returning it to its pure form. According to Rissman,5 a community is an experience of belonging. George Fox created a sense of fitting in to people who shared his views. The sense of belonging was shared in his religion of Quakerism. Though George Fox by no means gave a definition for Quakerism, it was he intended it to be. Therefore, he made a distinction between his society and the worldwide context. They are bound by their beliefs and cannot submit worldly laws, rather to follow previous apostles. Quarters’ refer to their morality to a superior being. Their community is bound ...Download file to see next pages Read More
Share:
Tags
Cite this document
(“Jurisprudence: There is no such thing as Quaker law Essay”, n.d.)
Jurisprudence: There is no such thing as Quaker law Essay. Retrieved from https://studentshare.org/law/1440590-jurisprudence-ypthere-is-no-such-thing-as-quaker

“Jurisprudence: There Is No Such Thing As Quaker Law Essay”, n.d. https://studentshare.org/law/1440590-jurisprudence-ypthere-is-no-such-thing-as-quaker.
Comments (0)
Click to create a comment or rate a document

CHECK THESE SAMPLES OF Jurisprudence: There is no such thing as Quaker law

New and complex issues have arisen which demanded fresh understanding and handling of cases involved them. This has resulted in the enhanced development of specialized laws e.g. cyber laws and interpretation of those laws. The same is true with Media Laws. Media has developed much in the last half-century. As it evolved as a profession and more people started to join it, there arose the levels of money involved in it. With this grew the contractual obligations on the parts of parties and concerned laws e.g. patent laws, privacy laws, and copyrights laws, etc. also started to play their parts. With these issues, the role of law in the media industry also reached a new height.
Mathew Fisher, the appellant, joined a band with Mr...
6 Pages (1500 words) Assignment
sponsored ads
Save Your Time for More Important Things
Let us write or edit the essay on your topic "Jurisprudence: There is no such thing as Quaker law" with a personal 20% discount.
GRAB THE BEST PAPER

Let us find you another Essay on topic Jurisprudence: There is no such thing as Quaker law for FREE!