Comments (0)
Add to wishlistDelete from wishlist
Cite this document
Summary
Legal counsel exercise Name: Instructor: Discussion Under the Constitution, the U.S President has the powers to order military attacks against any State, person or organization suspected of planning or involved in any form of terrorist attacks on the U.S, its citizens and property…
Download full paperFile format: .doc, available for editing
HIDE THIS PAPERGRAB THE BEST PAPER93.6% of users find it useful 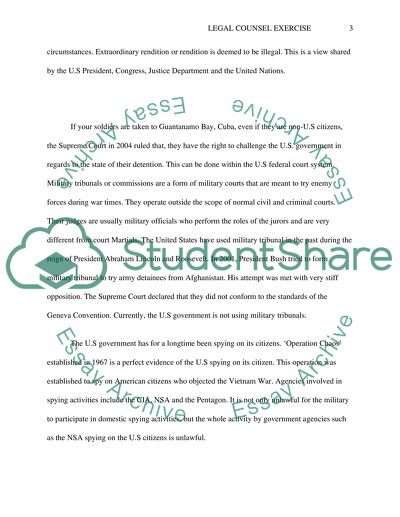 Download file to see previous pages This he can do whether or not the organization, person or state can be linked to any specific terrorist incidents. He will justify his actions by arguing that, being the Commander-in-chief of the U.S armed force, the constitutions vets him with the authority to use military force in response to emergencies caused by unforeseen, sudden terrorist attacks on citizens, properties or the U.S territory. In certain circumstances, the U.S government transfers foreign detainees suspected of terrorism acts to foreign states where they believe international legal or foreign safeguards do not apply for detention, questioning and interrogation. If your soldiers are detained, they might be transferred to U.S detention facilities are outside the American sovereign authority. They will be interrogated using methods and tactics that are not acceptable according to both international and federal standards. This process I usually referred to as extraordinary rendition. Does the U.S public policy allow for such a practice? No! It does not, but it is still practiced in certain circumstances. Extraordinary rendition or rendition is deemed to be illegal. This is a view shared by the U.S President, Congress, Justice Department and the United Nations. If your soldiers are taken to Guantanamo Bay, Cuba, even if they are non-U.S citizens, the Supreme Court in 2004 ruled that, they have the right to challenge the U.S. government in regards to the state of their detention. This can be done within the U.S federal court system. Military tribunals or commissions are a form of military courts that are meant to try enemy forces during war times. They operate outside the scope of normal civil and criminal courts. Their judges are usually military officials who perform the roles of the jurors and are very different from court Martials. The United States have used military tribunal in the past during the reign of President Abraham Lincoln and Roosevelt. In 2001, President Bush tried to form military tribunal to try army detainees from Afghanistan. His attempt was met with very stiff opposition. The Supreme Court declared that they did not conform to the standards of the Geneva Convention. Currently, the U.S government is not using military tribunals. The U.S government has for a longtime been spying on its citizens. ‘Operation Chaos’ established in 1967 is a perfect evidence of the U.S spying on its citizen. This operation was established to spy on American citizens who objected the Vietnam War. Agencies involved in spying activities include the CIA, NSA and the Pentagon. It is not only unlawful for the military to participate in domestic spying activities, but the whole activity by government agencies such as the NSA spying on the U.S citizens is unlawful. It is not lawful for you to attack the United States first even if you believe they are going to attack you. You must have viable reasons to warrant lawful attacks against the U.S. If you decide to proceed and attack them on the basis of your belief that they are going to attack you, your actions will be deemed to be acts of terrorism. Therefore, I would advise that you reconsider and clearly revaluate your reasons for wanting to attack the U.S. The United States has a constitution. This is the supreme law of the United States of America and all persons are accountable under it. All the other laws are derived from the Constitution. Whenever ...Download file to see next pagesRead More
Share:
Tags
Cite this document
(“Legal Counsel Exercise Assignment Example | Topics and Well Written Essays - 750 words”, n.d.)
Legal Counsel Exercise Assignment Example | Topics and Well Written Essays - 750 words. Retrieved from https://studentshare.org/law/1438055-legal-counsel-exercise
(Legal Counsel Exercise Assignment Example | Topics and Well Written Essays - 750 Words)
Legal Counsel Exercise Assignment Example | Topics and Well Written Essays - 750 Words. https://studentshare.org/law/1438055-legal-counsel-exercise.
“Legal Counsel Exercise Assignment Example | Topics and Well Written Essays - 750 Words”, n.d. https://studentshare.org/law/1438055-legal-counsel-exercise.
Comments (0)
Click to create a comment or rate a document

In the 19th century, marijuana became a common preference for ma...
6 Pages(1500 words)Case Study
sponsored ads
Save Your Time for More Important Things
Let us write or edit the assignment on your topic "Legal Counsel Exercise" with a personal 20% discount.
GRAB THE BEST PAPER

Let us find you another Assignment on topic Legal Counsel Exercise for FREE!