Comments (0)
Add to wishlistDelete from wishlist
Cite this document
Summary
There are two main definitions of the term ‘worker’ currently in use and both of them put within their ambit individuals who work/seek to work under either a contract of employment or any other contract providing for personal obligation towards another party. …
Download full paperFile format: .doc, available for editing
HIDE THIS PAPERGRAB THE BEST PAPER92.6% of users find it useful 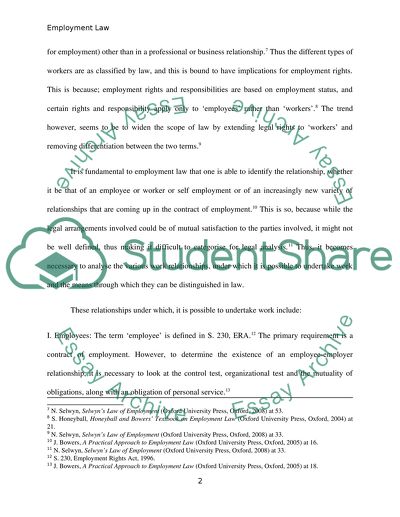 Download file to see previous pages Also, the judiciary seems to have laid its focus on the substance of the relationship rather than its form for its characterisation in law. Thus, a mutuality of obligation, together with elements of control, is usually seen as a prerequisite for a contract of employment to exist.
However, it is important to understand that all employees are workers but not all workers are employees. There are two main definitions of the term ‘worker’ currently in use and both of them put within their ambit individuals who work/seek to work under either a contract of employment or any other contract providing for personal obligation towards another party. In other words, a worker is anyone, who works for another person (not necessarily under a contract for employment) other than in a professional or business relationship. Thus the different types of workers are as classified by law, and this is bound to have implications for employment rights. This is because; employment rights and responsibilities are based on employment status, and certain rights and responsibility apply only to ‘employees’ rather than ‘workers’. The trend however, seems to be to widen the scope of law by extending legal rights to ‘workers’ and removing differentiation between the two terms.
9 It is fundamental to employment law that one is able to identify the relationship, whether it be that of an employee or worker or self employment or of an increasingly new variety of relationships that are coming up in the contract of employment.10 This is so, because while the legal arrangements involved could be of mutual satisfaction to the parties involved, it might not be well defined, thus making it difficult to categorise for legal analysis.11 Thus, it becomes necessary to analyse the various work relationships, under which it is possible to undertake work and the means through which they can be distinguished in law. These relationships under which, it is possible to undertake work include: I. Employees: The term ‘employee’ is defined in S. 230, ERA.12 The primary requirement is a contract of employment. However, to determine the existence of an employee-employer relationship, it is necessary to look at the control test, organizational test and the mutuality of obligations, along with an obligation of personal service.13 II. Directors: Directors are officers of the company. However, there is nothing to prevent directors from being employees. They can be employees, provided they have a service contract with the company, either express or implied.14 Besides, it is also important to look at the work conditions, mode of remuneration, and other legal requirements.15 However, it would be necessary to note on whether there has been use of the corporate veil to gain undue advantage, and if that has been done, to disallow the status of an employee.16 Thus, the status of a majoring shareholder or a director as an employee is affected, only if the employment contract is a sham.17 III. Business Consultants: It is seen that people who work in an advisory capacity are not always, strictly speaking, employees. Instead, they fall under the term ‘retainers’.18However, depending on the factual and legal arrangements made, a business consultant can be classified as an employee.19 IV. Office Holders: While an employment contract was a requisite to the work described above, a special category exists, who are not employed by virtue of contract of employment, and are known as office holders.20 Examples of such positions would include trustees, police officers, magistrates ...Download file to see next pagesRead More
Share:
Tags
Cite this document
(“Employment Law Coursework Example | Topics and Well Written Essays - 1500 words”, n.d.)
Employment Law Coursework Example | Topics and Well Written Essays - 1500 words. Retrieved from https://studentshare.org/law/1437848-employment-law

New and complex issues have arisen which demanded fresh understanding and handling of cases involved them. This has resulted in the enhanced development of specialized laws e.g. cyber laws and interpretation of those laws. The same is true with Media Laws. Media has developed much in the last half-century. As it evolved as a profession and more people started to join it, there arose the levels of money involved in it. With this grew the contractual obligations on the parts of parties and concerned laws e.g. patent laws, privacy laws, and copyrights laws, etc. also started to play their parts. With these issues, the role of law in the media industry also reached a new height.
Mathew Fisher, the appellant, joined a band with Mr...
6 Pages(1500 words)Assignment
sponsored ads
Save Your Time for More Important Things
Let us write or edit the coursework on your topic "Employment Law" with a personal 20% discount.
GRAB THE BEST PAPER

Let us find you another Coursework on topic Employment Law for FREE!