Comments (0)
Add to wishlistDelete from wishlist
Cite this document
Summary
The research paper is based on the Missouri Plan for selecting judges. It analyses and provides the Plan’s history, set up, advantages and disadvantages. In addition, the paper also provides an in depth analysis on various aspects related to America’s merit selection plan…
Download full paperFile format: .doc, available for editing
HIDE THIS PAPERGRAB THE BEST PAPER94.5% of users find it useful 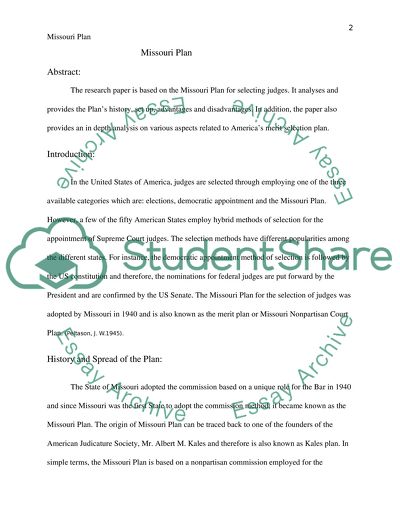 Download file to see previous pages Introduction: In the United States of America, judges are selected through employing one of the three available categories which are: elections, democratic appointment and the Missouri Plan. However, a few of the fifty American States employ hybrid methods of selection for the appointment of Supreme Court judges. The selection methods have different popularities among the different states. For instance, the democratic appointment method of selection is followed by the US constitution and therefore, the nominations for federal judges are put forward by the President and are confirmed by the US Senate. The Missouri Plan for the selection of judges was adopted by Missouri in 1940 and is also known as the merit plan or Missouri Nonpartisan Court Plan. (Peltason, J. W.1945). History and Spread of the Plan: The State of Missouri adopted the commission based on a unique role for the Bar in 1940 and since Missouri was the first State to adopt the commission method, it became known as the Missouri Plan. The origin of Missouri Plan can be traced back to one of the founders of the American Judicature Society, Mr. Albert M. Kales and therefore is also known as Kales plan. In simple terms, the Missouri Plan is based on a nonpartisan commission employed for the investigation and selection of judicial judges from a list of nominees and then provides the general public with the opportunity of removing the judges from the bench. Several other States use different variations of the Missouri Plan for the selection of Supreme Court judges. Moreover, a majority of the States employ hybrids of merit plan and Democratic appointment such as the combination of unique role for the Bar and federal judge nominees being confirmed by the US Senate. Today, the most common method of selection is the elections and the second most popular method is the merit plan. (Watson, R. A., & Downing, R. G.1969). The Plan: The judiciary has a number of Progressive Era reforms, one of which is the Merit Plan which is more commonly known as the Missouri Plan. The major aim of Missouri Plan is to free the political process from the government decision making and to let the experts perform the process of judicial selection. The experts are the lawyers who are entrusted with the job of selecting judges and bar association act as primary advocates. Therefore, the Plan attempts to shift power of selection to the Bar. (Kansas.1956). The Missouri Plan is based on two features which are as follows: i. The nominating commission submits a list of nominees from which the judges are appointed to the bench by the governor. ii. Once the judges have been appointed, at some point it becomes mandatory for them to come forward and face the public, which can then decide to remove the judges from their post through voting in an uncontested referendum. Therefore, it provides an opportunity to the general public to implement their opinion regarding the removal of appointed judges by saying yes or no. Thus, it limits the dependence of the Plan on the State and provides the general public an opportunity to implement their desires and provides them with a greater degree of independence from the government. (Watson, R. A., & Downing, R. G.1969). Advantages: i. The foremost advantage is that the selection and confirmation process is performed by experts i.e. the lawyers and the commission. The commission is well adapted for the process of assessing the qualifications of the judges as they know the law and are well informed with the preferences of the general public. I strongly believe that the method of Missouri Plan selects more qualified judges than the democratic appointment as the Plan eliminates political cronyism. Therefore, the nominating comm ...Download file to see next pagesRead More
Share:
Tags
Cite this document
(“Missouri Plan Law Research Paper Example | Topics and Well Written Essays - 1000 words”, n.d.)
Missouri Plan Law Research Paper Example | Topics and Well Written Essays - 1000 words. Retrieved from https://studentshare.org/law/1437398-missouri-plan-law
(Missouri Plan Law Research Paper Example | Topics and Well Written Essays - 1000 Words)
Missouri Plan Law Research Paper Example | Topics and Well Written Essays - 1000 Words. https://studentshare.org/law/1437398-missouri-plan-law.
“Missouri Plan Law Research Paper Example | Topics and Well Written Essays - 1000 Words”, n.d. https://studentshare.org/law/1437398-missouri-plan-law.
Comments (0)
Click to create a comment or rate a document

re representing our company as their business consultants and our responsibilities are limited to the knowledge of the client’s business and information provided by the client.
The company Of-Fit has been operating as office supplies and equipment supplier since 1998. Their corporate office is in Aberdeen and it has excellent industry relations. The company is a sole proprietorship and its owner is Mr. Andrew Schwatz who has been working in the industry for more than 20 years. The company current staff is 8 and its revenues are £115,690 and £156,178 in 2008. The company aims to expand its operations in other business areas and regions of the UK.
The detailed business plan developed for this report incor...
12 Pages(3000 words)Business Plan
sponsored ads
Save Your Time for More Important Things
Let us write or edit the research paper on your topic "Missouri Plan Law" with a personal 20% discount.
GRAB THE BEST PAPER

Let us find you another Research Paper on topic Missouri Plan Law for FREE!