Comments (0)
Add to wishlist Delete from wishlist
Cite this document
Summary
Tort Law Instructor Date Introduction This paper is an investigation of the liability for tort for a company involved in the manufacture of waterproof membranes that are utilized for civil construction. The activities of the company and its employees have resulted into injury and death for the plaintiffs being represented…
Download full paper File format: .doc, available for editing
HIDE THIS PAPERGRAB THE BEST PAPER92.5% of users find it useful 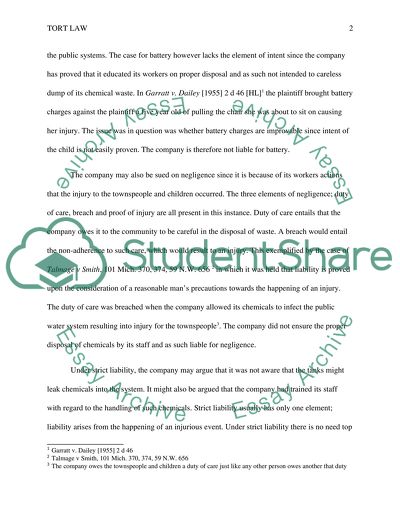 Download file to see previous pages This analysis will take into account the various damages that may be available to the plaintiffs according to the breaches of the Civil Code and tort in Common Law. The analysis of liability will therefore be pursued in a manner that will ensure that people that were harmed by negligence and battery will be justly compensated and the persons who breached the law are punished. Liability The Company Under common law, the company may be liable for battery since the chemicals that were ingested by the townspeople and the children originated from the company. The company is guilty since the elements of battery are present in the case. Offensive contact is proved by the coming into contact of the people and the chemicals through water, which resulted into injury in death. There is a lack of consent on the part of the townspeople on the dumping of the chemicals in the water. Additionally the company does not have the privilege of dumping toxic wastes in the public systems. The case for battery however lacks the element of intent since the company has proved that it educated its workers on proper disposal and as such not intended to careless dump of its chemical waste. In Garratt v. Dailey [1955] 2 d 46 [HL]1 the plaintiff brought battery charges against the plaintiff a five year old of pulling the chair she was about to sit on causing her injury. The issue was in question was whether battery charges are improvable since intent of the child is not easily proven. The company is therefore not liable for battery. The company may also be sued on negligence since it is because of its workers actions that the injury to the townspeople and children occurred. The three elements of negligence; duty of care, breach and proof of injury are all present in this instance. Duty of care entails that the company owes it to the community to be careful in the disposal of waste. A breach would entail the non-adherence to such care, which would result to an injury. This exemplified by the case of Talmage v Smith, 101 Mich. 370, 374, 59 N.W. 656 2 in which it was held that liability is proved upon the consideration of a reasonable man’s precautions towards the happening of an injury. The duty of care was breached when the company allowed its chemicals to infect the public water system resulting into injury for the townspeople3. The company did not ensure the proper disposal of chemicals by its staff and as such liable for negligence. Under strict liability, the company may argue that it was not aware that the tanks might leak chemicals into the system. It might also be argued that the company had trained its staff with regard to the handling of such chemicals. Strict liability usually has only one element; liability arises from the happening of an injurious event. Under strict liability there is no need top prove intent such as in battery but simply that injury occurred. Under strict liability doctrine, the company is liable in that even though it took all precautions, under common law, it is still liable in tort. A good example of this is the case of Cambridge Waster Company v. Eastern Counties Leather [1994] 2 AC 2643 (HL) the rule is that even as people have a right of enjoyment of land, the keeping of anything on the land will result to liability if it escapes from the land4. The UAE Civil Code does not ...Download file to see next pages Read More
Share:
Tags
Cite this document
(“Tort Law Essay Example | Topics and Well Written Essays - 2000 words”, n.d.)
Tort Law Essay Example | Topics and Well Written Essays - 2000 words. Retrieved from https://studentshare.org/law/1436938-tort-law

New and complex issues have arisen which demanded fresh understanding and handling of cases involved them. This has resulted in the enhanced development of specialized laws e.g. cyber laws and interpretation of those laws. The same is true with Media Laws. Media has developed much in the last half-century. As it evolved as a profession and more people started to join it, there arose the levels of money involved in it. With this grew the contractual obligations on the parts of parties and concerned laws e.g. patent laws, privacy laws, and copyrights laws, etc. also started to play their parts. With these issues, the role of law in the media industry also reached a new height.
Mathew Fisher, the appellant, joined a band with Mr...
6 Pages (1500 words) Assignment
sponsored ads
Save Your Time for More Important Things
Let us write or edit the essay on your topic "Tort Law" with a personal 20% discount.
GRAB THE BEST PAPER

Let us find you another Essay on topic Tort Law for FREE!