Comments (1)
Add to wishlist Delete from wishlist
Cite this document
Summary
In the era of conventional societies, punishment was just one of the art forms of obtaining retribution, rehabilitation, incapacitation, and deterrence of those who had forgone the set of boundaries of social cohesion…
Download full paper File format: .doc, available for editing
HIDE THIS PAPERGRAB THE BEST PAPER94.4% of users find it useful 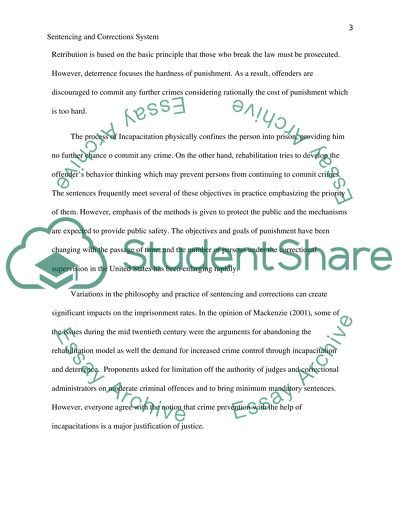 Even though rehabilitation is one of the listed purposes of sentencing, its capability to achieve the goals has been questioned at length. On the contrary, incapacitation unlike the other retribution methods is the severest form of punishment that reduces the possibility of the criminal’s reversion for a specific period of time. According to Mackenzie (2001), the world has been witnessing enormous changes in the philosophy and practice of sentencing and corrections during the last thirty years. The early twentieth century justice systems emphasized more on rehabilitation, whereas, by the end of the century emphasis was given on fairness and justice, considering sentences as necessary. With the changes of time, the concept of sentencing was altered into a crime-control method that focused on incarceration intending to reduce the amount of crime in the community. According to Mackenzie (2001), the four essential and fundamental goals attributed to the sentencing process are retribution, rehabilitation, deterrence, and incapacitation. Retribution is based on the basic principle that those who break the law must be prosecuted. However, deterrence focuses the hardness of punishment. As a result, offenders are discouraged to commit any further crimes considering rationally the cost of punishment which is too hard. The process of Incapacitation physically confines the person into prison, providing him no further chance o commit any crime. On the other hand, rehabilitation tries to develop the offender’s behavior thinking which may prevent persons from continuing to commit crimes. The sentences frequently meet several of these objectives in practice emphasizing the priority of them. However, emphasis of the methods is given to protect the public and the mechanisms are expected to provide public safety. The objectives and goals of punishment have been changing with the passage of time; and the number of persons under the correctional supervision in the United States has been enlarging rapidly. Variations in the philosophy and practice of sentencing and corrections can create significant impacts on the imprisonment rates. In the opinion of Mackenzie (2001), some of the issues during the mid twentieth century were the arguments for abandoning the rehabilitation model as well the demand for increased crime control through incapacitation and deterrence. Proponents asked for limitation off the authority of judges and correctional administrators on moderate criminal offences and to bring minimum mandatory sentences. However, everyone agree with the notion that crime prevention with the help of incapacitations is a major justification of justice. The overall impact also considers the impact on individual offenders, who are restricted by several Federal and State laws that deny the right to vote, hold offices, and engage in particular occupations. Sentencing has been affecting the state and federal corrections system throughout the years. The sentencing principle focused more on incarceration, having greater impacts on the total legal structure of the nation. As Blumstein (n.d) pints out, 12 percent of the increase in incarceration rates was due to more offenses being committed. Variations in the philosophy of sentencing and correction have a dramatic impact on the criminal judicial system. Even when some States did not alter to a determinate sentencing procedure, they undertook the changes to ...Download file to see next pages Read More
Share:
Tags
Cite this document
(“Sentencing and Corrections System Research Paper”, n.d.)
Retrieved de https://studentshare.org/law/1434055-sentencing-and-corrections-system

mr
mrussel added comment 1 year ago
Student rated this paper as
Perfect work done on the %topic%. I think it is the best text I have seen so far.

CHECK THESE SAMPLES OF Sentencing and Corrections System

The infrastructure of the information technology (IT) affords the base for an organization to construct its information system needed to complete the work and provide the employee with all the necessary information. However, management decisions regarding IT are very...
12 Pages (3000 words) Assignment

In order to compare the welfare system of the three proposed countries, it is important to first develop a comparative method that would guide in comparing the three states. For the purpose of this paper, a binary comparison would be conducted. The implicit comparison would deal with Britain while the explicit comparison would explore the USA and Canada. Thereby a small N’ study would be used, that is, of three countries.
The three countries selected to share a similarity in the form that these countries are a welfare state. This is when welfare is mainly funded by the state. While the USA and Canada focus on the liberal welfare state, the welfare state of the UK is not quite defined.
The comparison of the welfare...
8 Pages (2000 words) Term Paper
sponsored ads
Save Your Time for More Important Things
Let us write or edit the research paper on your topic "Sentencing and Corrections System" with a personal 20% discount.
GRAB THE BEST PAPER

Let us find you another Research Paper on topic Sentencing and Corrections System for FREE!