Comments (0)
Add to wishlist Delete from wishlist
Cite this document
Summary
English Property Law People are often keen on what they own; they do not like having challenges that arise because of their property. To set the rules about property and ownership in England, there is the English property law. Generally, property law has to do with the acquirement, sharing and security of possessions…
Download full paper File format: .doc, available for editing
HIDE THIS PAPERGRAB THE BEST PAPER94.3% of users find it useful 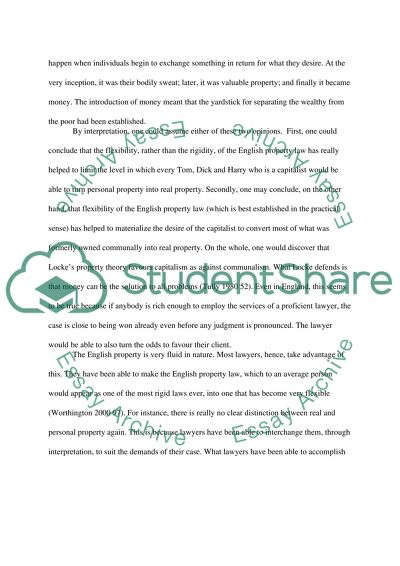 Download file to see previous pages Intellectual property is also integral to property law. One of the reasons for the promulgation of the law is the need to create distinction between real property and personal property (Worthington 2000 92). Of course, one of the most important goals of those that promulgated the law is to ensure that the conflicts that arise on the ownership of property will be reduced as much as possible. One of the instances that can be used to truly certify that the English property system is more pragmatic than theoretical is the manner in which judges give judgement in cases, precisely those that pertain to property law. Instead of strictly following what the statutes say, most judges would rather rely on logic. Locke’s theory of property also seems to reiterate this point. This is because Locke begins his arguments my stating that, at inception, property was personal—meaning that there were no individual owners. However, the persistence of this state of thing will mean that no one would be able to use land, for example, for individual or communal benefit. Locke recognizes that there is the need to create a system in which individuals can lay claim of ownership to what was hitherto communally owned (Tully 1980 34). This aspiration would be impossible if one desires to get the assent of every member of the community. It can only happen when individuals begin to exchange something in return for what they desire. At the very inception, it was their bodily sweat; later, it was valuable property; and finally it became money. The introduction of money meant that the yardstick for separating the wealthy from the poor had been established. By interpretation, one could assume either of these two opinions. First, one could conclude that the flexibility, rather than the rigidity, of the English property law has really helped to limit the level in which every Tom, Dick and Harry who is a capitalist would be able to turn personal property into real property. Secondly, one may conclude, on the other hand, that flexibility of the English property law (which is best established in the practical sense) has helped to materialize the desire of the capitalist to convert most of what was formerly owned communally into real property. On the whole, one would discover that Locke’s property theory favours capitalism as against communalism. What Locke defends is that money can be the solution to all problems (Tully 1980 52). Even in England, this seems to be true because if anybody is rich enough to employ the services of a proficient lawyer, the case is close to being won already even before any judgment is pronounced. The lawyer would be able to also turn the odds to favour their client. The English property is very fluid in nature. Most lawyers, hence, take advantage of this. They have been able to make the English property law, which to an average person would appear as one of the most rigid laws ever, into one that has become very flexible (Worthington 2000 97). For instance, there is really no clear distinction between real and personal property again. This is because lawyers have been able to interchange them, through interpretation, to suit the demands of their case. What lawyers have been able to accomplish may not really be as a result of their ingenuity but as a result of the fact that the law itself has created the lapses. For example, normally, the English statute would recognise an estate owned by a family as ...Download file to see next pages Read More
Share:
Cite this document
(“English Property Law Essay Example | Topics and Well Written Essays - 750 words”, n.d.)
Retrieved from https://studentshare.org/law/1430526-property-law-ypenglish-property-law-is-too

While I have been learning French for years, yet, only basic concepts like the meanings, pronunciations, and basic grammar rules are concerned, I want to understand more about the linguistic aspect, especially the morphological one, of the language. This includes the formation processes of French words and how the French internet languages are different from the traditional word-formation processes. I as well want to discover new information on the computer-mediated languages to improve my informal understanding of both English and French. I am also eager to learn more about the morphological word formation so that I can become a better language teacher.
Linguists categorize words as the small units of syntax within a given l...
12 Pages (3000 words) Assignment

New and complex issues have arisen which demanded fresh understanding and handling of cases involved them. This has resulted in the enhanced development of specialized laws e.g. cyber laws and interpretation of those laws. The same is true with Media Laws. Media has developed much in the last half-century. As it evolved as a profession and more people started to join it, there arose the levels of money involved in it. With this grew the contractual obligations on the parts of parties and concerned laws e.g. patent laws, privacy laws, and copyrights laws, etc. also started to play their parts. With these issues, the role of law in the media industry also reached a new height.
Mathew Fisher, the appellant, joined a band with Mr...
6 Pages (1500 words) Assignment
sponsored ads
Save Your Time for More Important Things
Let us write or edit the essay on your topic "English Property Law" with a personal 20% discount.
GRAB THE BEST PAPER

Let us find you another Essay on topic English Property Law for FREE!