Elastic Clause of the US Constitution - Assignment Example

Comments (0)
Add to wishlist Delete from wishlist
Cite this document
Summary
The paper “Elastic Clause of the US Constitution” concerns a controversial role of the central bank. If the founding fathers created it to establish financial order, and to resolve the issue of valueless money, then today, central banking has no ties with tax collection, but controls over currency…
Download full paper File format: .doc, available for editing
HIDE THIS PAPERGRAB THE BEST PAPER95.8% of users find it useful 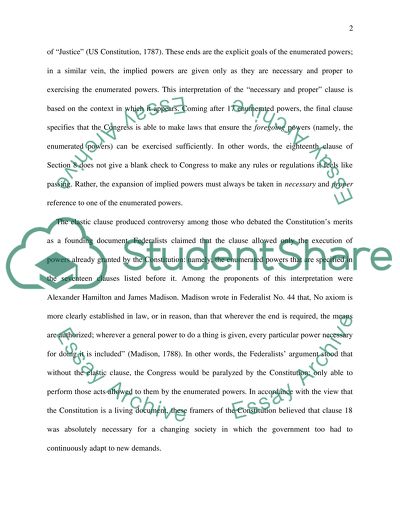 Extract of sample "Elastic Clause of the US Constitution"

Download file to see previous pages “Implied” powers are “those powers given to Congress by Article 1, Section 8, clause 18, of the Constitution that is not specifically named but is provided for by the necessary and proper clause” (p. 45). Accordingly, the necessary and proper clause exists to afford these implied powers to Congress in order to make sure the federal government has the power to carry out the laws “which shall be necessary and proper for carrying into Execution the foregoing Powers, and all other Powers vested by this Constitution in the Government of the United States” (p. 44). This clause is problematic for many because it falls along the Federalist/Anti-Federalist divide and the contemporary Conservative/Liberal divide. However, the problem with the necessary and proper clause is not with its controversial and contentious nature, but with the fact that it is vague, ambiguous, and is designed for subjective interpretations and applications of Constitutional law.
The phrase “necessary and proper” in clause 18 of Article 1, Section 8 entitles Congress to make laws that extend beyond what the Constitution enumerates in the previous 17 clauses of that Section. This is taken to be a relationship between an end-goal and the means of achieving that goal (Engdahl, 2011). The end-goal must be a necessity for the achievement of the purpose of a government, which include the formation of “a more perfect Union” and the establishment of “Justice” (US Constitution, 1787). These ends are the explicit goals of the enumerated powers; in a similar vein, the implied powers are given only as they are necessary and proper to exercise the enumerated powers. This interpretation of the “necessary and proper” clause is based on the context in which it appears. Coming after 17 enumerated powers, the final clause specifies that the Congress is able to make laws that ensure the foregoing powers (namely, the enumerated powers) can be exercised sufficiently. In other words, the eighteenth clause of Section 8 does not give a blank check to Congress to make any rules or regulations it feels like passing. Rather, the expansion of implied powers must always be taken in necessary and proper reference to one of the enumerated powers. ...Download file to see next pages Read More
Share:
Tags
Cite this document
(“Elastic Clause of the US Constitution Assignment”, n.d.)
Elastic Clause of the US Constitution Assignment. Retrieved from https://studentshare.org/law/1429754-american-government-final-essay

“Elastic Clause of the US Constitution Assignment”, n.d. https://studentshare.org/law/1429754-american-government-final-essay.
Comments (0)
Click to create a comment or rate a document

CHECK THESE SAMPLES OF Elastic Clause of the US Constitution

These contribute to several challenges faced by the IC today1.
For example, the Japanese fleet’s attack on Pearl Harbor, which was a surprise attack and the subsequent entrance of America into the Second World War, illustrated the need to re-engineer the outdated policies and organization of the IC. The changes made by the U.S. in the IC, which occasioned from World War II are still palpable today2. Some changes were later made when the Senate Committees came together with the aim of investigating the Central Intelligence Agency (CIA), National Security Agency (NSA), Federal Bureau of Investigation (FBI), and Internal Revenue Service (IRS) to evaluate the possible abuses of power that transpired in the preceding years.<...
9 Pages (2250 words) Assignment
sponsored ads
Save Your Time for More Important Things
Let us write or edit the assignment on your topic "Elastic Clause of the US Constitution" with a personal 20% discount.
GRAB THE BEST PAPER

Let us find you another Assignment on topic Elastic Clause of the US Constitution for FREE!