Comments (0)
Add to wishlistDelete from wishlist
Cite this document
Summary
The issue in this question requires an analysis on the distinction between persons who are established and those who are service providers. The courts said that the ‘actual pursuit of an economic activity through a fixed establishment in another Member State for an indefinite period’.
…
Download full paperFile format: .doc, available for editing
HIDE THIS PAPERGRAB THE BEST PAPER96.7% of users find it useful 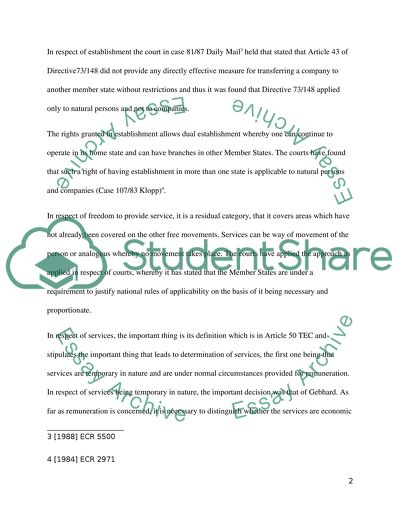 Download file to see previous pages This essay demonstrates the difference between persons who are established and those who are service providers within EU LAW. The essay outlines key distinction between services and establishment. There are some interesting examples of court practice concerning EU Directives application in cases of natural persons and companies. The essay considers the opportunity of dual establishment whereby one can continue to operate in its home state and can have branches in other Member States. The courts have stated that if an office is set up in the home state, that in itself would not be conclusive evidence as to establishment, similarly in respect service provider, he may set up ‘the infrastructure necessary for the purpose of performing the services in question’ in host state which can be an office, thus that would not be conclusive. In respect of establishment, the court in case 81/87 Daily Mail held that stated that Article 43 of Directive73/148 did not provide any directly effective measure for transferring a company to another member state without restrictions and thus it was found that Directive 73/148 applied only to natural persons and not to companies. Services can be way of movement of the person or analogous whereby no movement takes place. In respect of services, the important thing is its definition, which is in Article 50 TEC and stipulates the important thing that leads to determination of services, the first one being that services are temporary in nature and are under normal circumstances provided for remuneration. In respect of services being temporary in nature, the important decision was that of Gebhard. As far as remuneration is concerned, it is necessary to distinguish whether the services are economic nature or for a non-profit making purpose. A private school coming under the head of services was considered in Case 263/86 Belgium v. Humbel5 where it was found that the school was not “the nature of the activity is not affected by the fact that pupils or their parents must sometimes pay fees” so as to provide for operating expenses. However, in Case C-109/92 Wirth6 it was held that if the institute was operational with the aim of making a profit and the basic mode of financing was private fees, then that would be service under Article 49 EC Treaty. The courts have strongly detested discrimination on the basis of nationality, establishment or residence, as can be seen in Case 33/74 Van Binsbergen7 where the requirement of a person to be habitually resident in the host state was said to be contrary to Article 49 EC Treaty. 1b. In respect of Sylvester it is important to consider the decision of Gebhard whereby it was stated that the duration, regularity, periodicity and continuity of the provision of the services’ is looked into. As far as services are considered they are considered to be temporary in nature, and actual movement is not required. In respect of Sylvester the duration has been two years, as far as regularity is concerned that cannot be ...Download file to see next pagesRead More
Share:
Tags
Cite this document
(“EU LAW Essay Example | Topics and Well Written Essays - 1500 words - 2”, n.d.)
Retrieved from https://studentshare.org/law/1429421-eu-law
(EU LAW Essay Example | Topics and Well Written Essays - 1500 Words - 2)
https://studentshare.org/law/1429421-eu-law.
“EU LAW Essay Example | Topics and Well Written Essays - 1500 Words - 2”, n.d. https://studentshare.org/law/1429421-eu-law.
Comments (0)
Click to create a comment or rate a document

CHECK THESE SAMPLES OF EU LAW

New and complex issues have arisen which demanded fresh understanding and handling of cases involved them. This has resulted in the enhanced development of specialized laws e.g. cyber laws and interpretation of those laws. The same is true with Media Laws. Media has developed much in the last half-century. As it evolved as a profession and more people started to join it, there arose the levels of money involved in it. With this grew the contractual obligations on the parts of parties and concerned laws e.g. patent laws, privacy laws, and copyrights laws, etc. also started to play their parts. With these issues, the role of law in the media industry also reached a new height.
Mathew Fisher, the appellant, joined a band with Mr...
6 Pages(1500 words)Assignment
sponsored ads
Save Your Time for More Important Things
Let us write or edit the essay on your topic "EU LAW" with a personal 20% discount.
GRAB THE BEST PAPER

Let us find you another Essay on topic EU LAW for FREE!