Comments (0)
Add to wishlist Delete from wishlist
Cite this document
Summary
Question: Does the idea of proportional liability- that the defendant pays for the chance that her negligence caused the claimant’s injury-serve justice? What is the proper scope of such idea in English Law?…
Download full paper File format: .doc, available for editing
HIDE THIS PAPERGRAB THE BEST PAPER92.2% of users find it useful 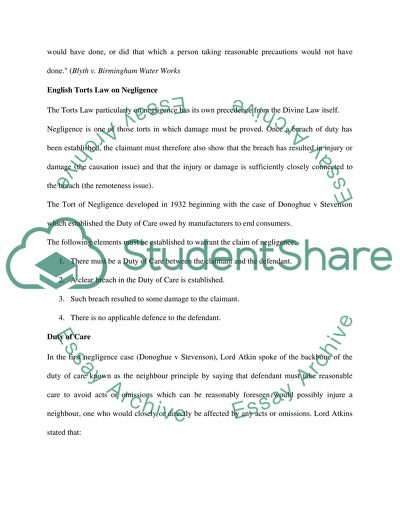 Download file to see previous pages The defendant is required under English Torts Law on negligence to compensate the claimant by payment of damages or fine or by heeding an injunction as duly determined by the court. This should effectively deter people from being careless in the conduct of their duties. In a way this intends to enforce a standard of behaviour, to protect the life, welfare, and interest of unwilling victims of another person’s act of negligence. This principle on negligence is not new. In Bible times, the Divine Law dictates that a man could be deemed guilty by his negligence: “In case you build a new house, you must also make a parapet for your roof that you may not place bloodguilt upon your house because someone falling might fall from it.” –Deuteronomy 22:8, The New World Translation of the Holy Scriptures. Negligence Defined "Negligence is the omission to do something which a reasonable man, guided upon those considerations which ordinarily regulate the conduct of human affairs, would do, or doing something which a prudent and reasonable man would not do. The defendants might have been liable for negligence, if, unintentionally, they omitted to do that which a reasonable person would have done, or did that which a person taking reasonable precautions would not have done." (Blyth v. Birmingham Water Works English Torts Law on Negligence The Torts Law particularly on negligence has its own precedence from the Divine Law itself. Negligence is one of those torts in which damage must be proved. Once a breach of duty has been established, the claimant must therefore also show that the breach has resulted in injury or damage (the causation issue) and that the injury or damage is sufficiently closely connected to the breach (the remoteness issue). The Tort of Negligence developed in 1932 beginning with the case of Donoghue v Stevenson which established the Duty of Care owed by manufacturers to end consumers. The following elements must be established to warrant the claim of negligence: 1. There must be a Duty of Care between the claimant and the defendant. 2. A clear breach in the Duty of Care is established. 3. Such breach resulted to some damage to the claimant. 4. There is no applicable defence to the defendant. Duty of Care In the first negligence case (Donoghue v Stevenson), Lord Atkin spoke of the backbone of the duty of care known as the neighbour principle by saying that defendant must take reasonable care to avoid acts or omissions which can be reasonably foreseen would possibly injure a neighbour, one who would closely or directly be affected by any acts or omissions. Lord Atkins stated that: “You must take reasonable care to avoid acts or omissions which you can reasonably foresee would be likely to injure your neighbour. Who, then, in law is my neighbour? The answer seems to be - persons who are so closely and directly affected by my act that I ought reasonably to have them in contemplation as being so affected when I am directing my mind to the acts or omissions which are called in question”. The case of Caparo Industries plc v Dickman in 1990 gave rise to the Caparo three-way test, which is the modern day test for determining duty of care: 1. It is reasonably foreseeable that the claimant may be harmed by the defendant’s failure to observe reasonable care. 2. The relationship of the claimant and the defendant indicates a sufficient relationship of proximity or remoteness. 3. It is fair, just and reasonable to impose on the defendant a duty of care towards the claimant. In 1934 Lord Wright said: “In strict legal analysis, negligence means more than heedless or careless conduct, whether in omission or commission: ...Download file to see next pages Read More
Share:
Tags
Cite this document
(“English Torts Law Essay Example | Topics and Well Written Essays - 1500 words”, n.d.)
Retrieved from https://studentshare.org/law/1420906-torts-essay

While I have been learning French for years, yet, only basic concepts like the meanings, pronunciations, and basic grammar rules are concerned, I want to understand more about the linguistic aspect, especially the morphological one, of the language. This includes the formation processes of French words and how the French internet languages are different from the traditional word-formation processes. I as well want to discover new information on the computer-mediated languages to improve my informal understanding of both English and French. I am also eager to learn more about the morphological word formation so that I can become a better language teacher.
Linguists categorize words as the small units of syntax within a given l...
12 Pages (3000 words) Assignment

New and complex issues have arisen which demanded fresh understanding and handling of cases involved them. This has resulted in the enhanced development of specialized laws e.g. cyber laws and interpretation of those laws. The same is true with Media Laws. Media has developed much in the last half-century. As it evolved as a profession and more people started to join it, there arose the levels of money involved in it. With this grew the contractual obligations on the parts of parties and concerned laws e.g. patent laws, privacy laws, and copyrights laws, etc. also started to play their parts. With these issues, the role of law in the media industry also reached a new height.
Mathew Fisher, the appellant, joined a band with Mr...
6 Pages (1500 words) Assignment
sponsored ads
Save Your Time for More Important Things
Let us write or edit the essay on your topic "English Torts Law" with a personal 20% discount.
GRAB THE BEST PAPER

Let us find you another Essay on topic English Torts Law for FREE!