Comments (0)
Add to wishlist Delete from wishlist
Cite this document
Summary
In the paper “Trusts Law Arguments by Jones Garton and Margaret Halliwell” the author discusses English trusts law as a unique element of English legal system. Trusts represent an intention of a ‘settlor’ to transfer his assets to a trustee…
Download full paper File format: .doc, available for editing
HIDE THIS PAPERGRAB THE BEST PAPER93.9% of users find it useful 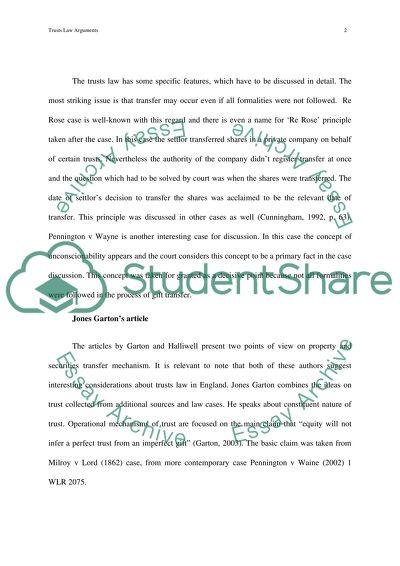 Download file to see previous pages The articles by modern authors Jones Garton and Margaret Halliwell consider this phenomenon from a modern perspective. They refer to the most well-known cases in this field: Milroy v Lord, Re Rose, Pennington v Wayne and some others. In order to define the level of trust in perfect/imperfect gifts, it is relevant to refer to additional reading from previous years and to current sources (Substantial Change in Trust Tax Law, 2006; Diamond, 2002). A complicated nature of gift is the absence of contract basis, i. e. there is no special consideration of gift transfer (Langbein, 1995; McKendrick, 1992). Moreover, if a giver fails to complete required formal stages or has no legal title, gift may fail. Courts refer to the generally accepted motto in this kind of cases: “equity will not perfect an imperfect gift” (Langbein, 1995). Consequently, there are a lot of controversies appearing in trust cases. That’s why it is relevant to discuss a balanced nature of trust. In other words there is a need to consider its theoretical basis and practical implementation. A consideration about constitution of trust is a vividly discussed issue for academics and researchers, because practical implementation of trust in trusts law is rather rare. The trusts law has some specific features, which have to be discussed in detail. The most striking issue is that transfer may occur even if all formalities were not followed. Re Rose case is well-known with this regard and there is even a name for ‘Re Rose’ principle taken after the case. In this case the settlor transferred shares in a private company on behalf of certain trusts. Nevertheless the authority of the company didn’t register transfer at once and the question which had to be solved by court was when the shares were transferred. The date of settlor’s decision to transfer the shares was acclaimed to be the relevant date of transfer. This principle was discussed in other cases as well (Cunningham, 1992, p. 63). Pennington v Wayne is another interesting case for discussion. In this case the concept of unconscionability appears and the court considers this concept to be a primary fact in the case discussion. This concept was taken for granted as a decisive point because not all formalities were followed in the process of gift transfer. Jones Garton’s article The articles by Garton and Halliwell present two points of view on property and securities transfer mechanism. It is relevant to note that both of these authors suggest interesting considerations about trusts law in England. Jones Garton combines the ideas on trust collected from additional sources and law cases. He speaks about constituent nature of trust. Operational mechanisms of trust are focused on the main claim that “equity will not infer a perfect trust from an imperfect gift” (Garton, 2003). The basic claim was taken from Milroy v Lord (1862) case, from more contemporary case Pennington v Waine (2002) 1 WLR 2075. In accordance with Garton there are different principles in the rule of the ‘last act’ which establishes constitution and its application. Garton’s work impresses readers by his considerations about the ‘workings’ of trusts in Rose’s case which are express and constructive. Therefore it is clearly seen that Garton is interested in a concept of trust in imperfect gifts. ...Download file to see next pages Read More
Share:
Tags
Cite this document
(“Trusts Law Arguments by Jones Garton and Margaret Halliwell Essay”, n.d.)
Retrieved from https://studentshare.org/law/1405608-is-either-argument-to-be-preferred

In th...
8 Pages (2000 words) Case Study
sponsored ads
Save Your Time for More Important Things
Let us write or edit the essay on your topic "Trusts Law Arguments by Jones Garton and Margaret Halliwell" with a personal 20% discount.
GRAB THE BEST PAPER

Let us find you another Essay on topic Trusts Law Arguments by Jones Garton and Margaret Halliwell for FREE!