Comments (0)
Add to wishlist Delete from wishlist
Cite this document
Summary
“Work made for hire” is defined under § 101, Chapter 1 of Title 17 on Copyrights of the US Code as work, which is either prepared by a person as part of his work during his employment or works which are especially commissioned…
Download full paper File format: .doc, available for editing
HIDE THIS PAPERGRAB THE BEST PAPER99% of users find it useful 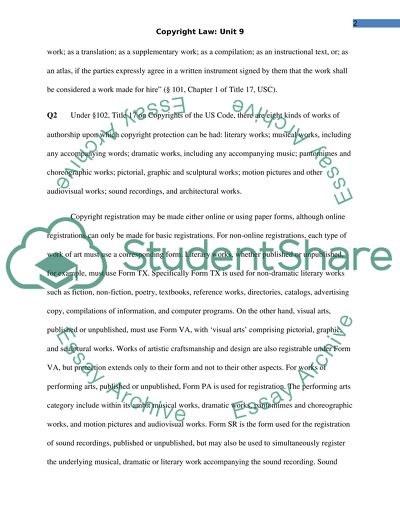 Download file to see previous pages “Work made for hire” is defined under § 101, Chapter 1 of Title 17 on Copyrights of the US Code as work, which is either prepared by a person as part of his work during his employment or works which are especially commissioned. The ‘work made for hire’ rule constitutes an exception to the general rule that copyright ownership naturally belongs to the author or creator of that work, implying that in such cases, the employer or the person for whom the work is done or created for is deemed the copyright owner of the work.However, this can be true only if there is no express agreement in writing signed by the parties indicating a contrary intention (§ 210, Chapter 2 of Title 17, USC). Under the first definition of ‘work made for hire,’ the term employee is constructed in accordance with the holding of the Court in Community for Creative Non-Violence v Reid, 490 US 730 (1989). In that case, an artist’s help was solicited by a non-profit organization to aid in their campaign against homelessness. The artist acceded, but no agreement between them as to copyright ownership over the sculpture was entered into. When the artist later claimed copyright ownership, the organization went to court. The US Supreme Court held that the term ‘employee’ should be taken in the context of the conventional employee-employer relation, without resorting to the control test often employed in common law. The SC’s decision relied on the agency law, where agency is determined under a ten-factor test. Since the conditions in the case did not satisfy this, the Court held that it was not within the ambit of the ‘work made for hire’ and copyright ownership belonged to the artist. On the other hand, ‘work made for hire’ under the second type, or the especially commissioned works, is easier to determine because the law itself confined it to nine types of work: “as a contribution to a collective work; as part of a motion picture or other audiovisual work; as a translation; as a supplementary work; as a compilation; as an instructional text, or; as an atlas, if the parties expressly agree in a written instrument signed by them that the work shall be considered a work made for hire” (§ 101, Chapter 1 of Title 17, USC). Q2 Under §102, Title 17 on Copyrights of the US Code, there are eight kinds of works of authorship upon which copyright protection can be had: literary works; musical works, including any accompanying words; dramatic works, including any accompanying music; pantomimes and choreographic works; pictorial, graphic and sculptural works; motion pictures and other audiovisual works; sound recordings, and architectural works. Copyright registration may be made either online or using paper forms, although online registrations can only be made for basic registrations. For non-online registrations, each type of work of art must use a corresponding form. Literary works, whether published or unpublished, for example, must use Form TX. Specifically Form TX is used for non-dramatic literary works such as fiction, non-fiction, poetry, textbooks, reference works, directories, catalogs, advertising copy, compilations of information, and computer programs. On the other hand, visual arts, published or unpublished, must use Form VA, with ‘visual arts’ comprising pictorial, graphic, and sculptural works. Works of artistic craftsmanship and design are also registrable under Form VA, but protection extends only to their form and not to their other aspects. For works of performing arts, published or unpublished, Form PA is used for registration. The performing arts category include within its ambit musical works, dramatic works, pantomimes and choreographic works, and motion pictures and audiovisual works. Form SR is the form used for the registration of sound recordings, published or unpublished, but may also be used to simultaneously register the underlying musical, dramatic or literary work accompanying the sound recording. Sound recording, however, ...Download file to see next pages Read More
Share:
Tags
Cite this document
(“Copyright law Essay Example | Topics and Well Written Essays - 750 words”, n.d.)
Retrieved from https://studentshare.org/law/1404955-copyright-law

CHECK THESE SAMPLES OF Copyright law

In th...
8 Pages (2000 words) Case Study
sponsored ads
Save Your Time for More Important Things
Let us write or edit the essay on your topic "Copyright law" with a personal 20% discount.
GRAB THE BEST PAPER

Let us find you another Essay on topic Copyright law for FREE!