Comments (0)
Add to wishlist Delete from wishlist
Cite this document
Summary
Employment Law Default retirement age (DRA) under Equality (Age) Regulations 2006 has since been abolished from 1 October 2011 and after the transition period, any forced retirement of an employee will tantamount to automatically unfair dismissal unless the organisation has an objectively justified retirement age…
Download full paper File format: .doc, available for editing
HIDE THIS PAPERGRAB THE BEST PAPER96.7% of users find it useful 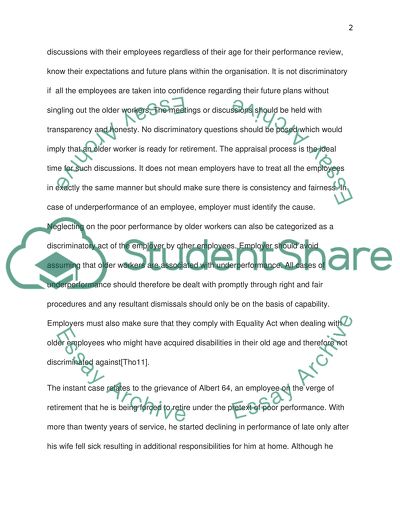 Download file to see previous pages The justification will generally be under exceptional circumstances which not all organisations can meet when challenged at the Employment Tribunal. Such a justification will be found in posts for which the employer already has a retirement of age far below 65 due to nature of the jobs such as emergency services requiring a certain level of physical fitness or those requiring high level mental fitness such as air traffic controllers. Justifications can also be found in areas where Default Retirement Age (DRA) does not apply such as partners in a law firm. As DRA has been scrapped, employers must ensure that management of their employees’ performance is not discriminatory and not inconsistent to avoid possible litigation from the disgruntled employees who may be discriminated against on the grounds of age. Employer should apply non-discriminatory and consistent policies across the organisation. Employer should ensure that the managers are updated with latest procedures and trained in handling employees’ performance. Employers should conduct regular meetings or discussions with their employees regardless of their age for their performance review, know their expectations and future plans within the organisation. It is not discriminatory if all the employees are taken into confidence regarding their future plans without singling out the older workers. The meetings or discussions should be held with transparency and honesty. No discriminatory questions should be posed which would imply that an older worker is ready for retirement. The appraisal process is the ideal time for such discussions. It does not mean employers have to treat all the employees in exactly the same manner but should make sure there is consistency and fairness. In case of underperformance of an employee, employer must identify the cause. Neglecting on the poor performance by older workers can also be categorized as a discriminatory act of the employer by other employees. Employer should avoid assuming that older workers are associated with underperformance. All cases of underperformance should therefore be dealt with promptly through right and fair procedures and any resultant dismissals should only be on the basis of capability. Employers must also make sure that they comply with Equality Act when dealing with older employees who might have acquired disabilities in their old age and therefore not discriminated against (Thompson, 2011). The instant case relates to the grievance of Albert 64, an employee on the verge of retirement that he is being forced to retire under the pretext of poor performance. With more than twenty years of service, he started declining in performance of late only after his wife fell sick resulting in additional responsibilities for him at home. Although he wanted to work at home one day a week, his request was declined as his manger Chris did not want to set a precedent in finance department where Albert worked although a female employee of the administration department had been permitted to work at home one day a week. While at first, Albert’s poor performance was being discussed with him personally at regular meeting, later he was being called in for specific purpose of discussing his poor performance only with which he felt uncomfortable and was convinced that the management’s aim was to terminate his service on capability grounds. At first glance it appears that Albert’ ...Download file to see next pages Read More
Share:
Tags
Cite this document
(“Employment law Essay Example | Topics and Well Written Essays - 3000 words - 1”, n.d.)
Retrieved from https://studentshare.org/law/1404482-employment-law

In th...
8 Pages (2000 words) Case Study
sponsored ads
Save Your Time for More Important Things
Let us write or edit the essay on your topic "Employment law" with a personal 20% discount.
GRAB THE BEST PAPER