Comments (0)
Add to wishlistDelete from wishlist
Cite this document
Summary
Legal Institutions and Methods Instructor Date QUESTION 1 Question 1 (part a) i) The term prescribed as used in the Act refers to an order made by the Secretary of State by statutory instrument ii) The Act defines BBC as the British Broadcasting Corporation iii) The Act defines broadcasting as communication by wireless telegraphy in accordance to the definition of Section 116 of the wireless telegraphy Act of 2006 or otherwise by satellite communication…
Download full paperFile format: .doc, available for editing
HIDE THIS PAPERGRAB THE BEST PAPER97.8% of users find it useful 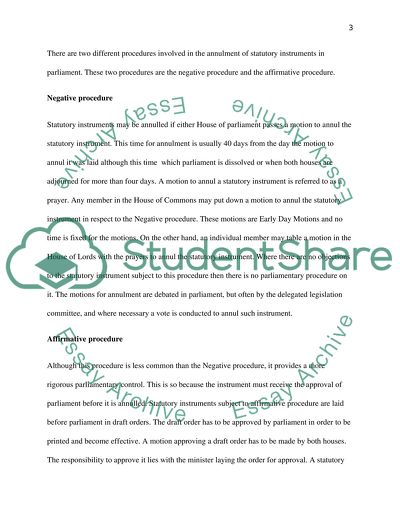 Download file to see previous pages Another indictable offense in another area of law is murder. b) In summary conviction of an offense committed under section 3 of the Act an individual is subject to imprisonment for a term of not more than 12 months or a fine not in excess of the maximum under the statute or both the imprisonment and the fine. Question 1 (part c) There are two different procedures involved in the annulment of statutory instruments in parliament. These two procedures are the negative procedure and the affirmative procedure. Negative procedure Statutory instruments may be annulled if either House of parliament passes a motion to annul the statutory instrument. This time for annulment is usually 40 days from the day the motion to annul it was laid although this time which parliament is dissolved or when both houses are adjourned for more than four days. A motion to annul a statutory instrument is referred to as a prayer. Any member in the House of Commons may put down a motion to annul the statutory instrument in respect to the Negative procedure. These motions are Early Day Motions and no time is fixed for the motions. On the other hand, an individual member may table a motion in the House of Lords with the prayers to annul the statutory instrument. Where there are no objections to the statutory instrument subject to this procedure then there is no parliamentary procedure on it. The motions for annulment are debated in parliament, but often by the delegated legislation committee, and where necessary a vote is conducted to annul such instrument. Affirmative procedure Although this procedure is less common than the Negative procedure, it provides a more rigorous parliamentary control. This is so because the instrument must receive the approval of parliament before it is annulled. Statutory instruments subject to affirmative procedure are laid before parliament in draft orders. The draft order has to be approved by parliament in order to be printed and become effective. A motion approving a draft order has to be made by both houses. The responsibility to approve it lies with the minister laying the order for approval. A statutory instrument subject to this procedure also requires 28 or 40 days after it is laid in parliament to be annulled or remain in force. The relevant minister prepares a motion in this respect and it is upon the minister to ensure that the statutory instrument is discussed within a reasonable time. Question 1 (part d) i) Tom has committed an offense under section 3(1) of the Act by passing information to his friend Bill. The Act prohibits a relevant person from passing information without lawful authority. Tom falls under the category of a relevant person pursuant to section 4 (c) of the Act, which defines a relevant person to include individuals engaged by the BBC. Section 7 of the Act provides that if an individual commits an offense under section 3 then that person is liable to imprisonment for a period not exceeding two years or to a fine on conviction on indictment or imprisonment for a period not exceeding 12 months or a fine on summary conviction. ii) the provisions of sub section 5 implies that if an individual commits an offence under section 3 (2) of the Act then the individual can ...Download file to see next pagesRead More
Share:
Tags
Cite this document
(“Legal Institutions and Methods Essay Example | Topics and Well Written Essays - 2750 words”, n.d.)
Retrieved from https://studentshare.org/law/1404375-legal-institutions-and-methods
(Legal Institutions and Methods Essay Example | Topics and Well Written Essays - 2750 Words)
https://studentshare.org/law/1404375-legal-institutions-and-methods.
“Legal Institutions and Methods Essay Example | Topics and Well Written Essays - 2750 Words”, n.d. https://studentshare.org/law/1404375-legal-institutions-and-methods.
Comments (0)
Click to create a comment or rate a document

CHECK THESE SAMPLES OF Legal Institutions and Methods

The simple ideology is embraced by some but the arguments are flawed when the realities of abortion are examined. Studies have shown that most women are coerced into committing this murderous act of a living human and that there is no such thing as safe abortions as many are led to believe. Pro-abortion proponents generally espouse that the rights of a non-living tissue that feels no pain are non-existent. These untruths have been widely perceived as facts. In addition, the Founding Fathers of this nation intended to shape not only the legal but the moral direction of American society as well when they drafted the Constitution, the document that defines the laws of the nation. If they were alive today, the Founders clearly would b...
8 Pages(2000 words)Coursework
sponsored ads
Save Your Time for More Important Things
Let us write or edit the essay on your topic "Legal Institutions and Methods" with a personal 20% discount.
GRAB THE BEST PAPER

Let us find you another Essay on topic Legal Institutions and Methods for FREE!