Comments (0)
Add to wishlistDelete from wishlist
Cite this document
Summary
European Union law Table of Contents Question 1 3 Question 2 7 References 14 Question 1 In accordance with the European Union (EU) Commission legislatives, discrimination in terms of employee remuneration or pay on the basis of gender, nationality, religion, disability, age, culture and origins is termed as unethical business practices and therefore is considered to be illegal…
Download full paperFile format: .doc, available for editing
HIDE THIS PAPERGRAB THE BEST PAPER94.7% of users find it useful 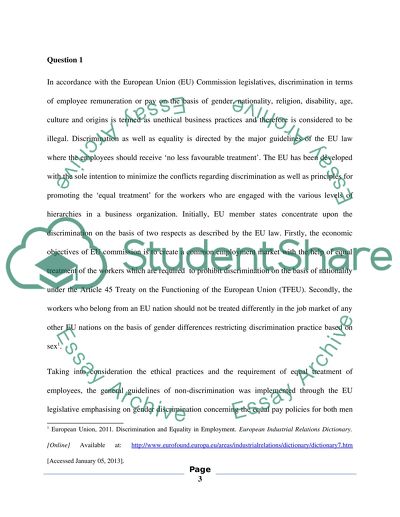 Download file to see previous pages Initially, EU member states concentrate upon the discrimination on the basis of two respects as described by the EU law. Firstly, the economic objectives of EU commission is to create a common employment market with the help of equal treatment of the workers which are required to prohibit discrimination on the basis of nationality under the Article 45 Treaty on the Functioning of the European Union (TFEU). Secondly, the workers who belong from an EU nation should not be treated differently in the job market of any other EU nations on the basis of gender differences restricting discrimination practice based on sex1. Taking into consideration the ethical practices and the requirement of equal treatment of employees, the general guidelines of non-discrimination was implemented through the EU legislative emphasising on gender discrimination concerning the equal pay policies for both men and women under the Article 157 of the TFEU which was formerly attributed as Article 119 of the European Commission (EC). The ‘pay gap’ between both the genders is regarded as applicable in every member state of EU according to the EU law. On the basis of the implications of ‘pay gap’, the EU legislation promotes equal pay in order to evaluate the gap between the income levels of both the genders whose pay structure is quite higher. Contextually, the employment segmentation on the basis of gender implies that in many employment workplaces, the male employees predominantly occupied the labour market within the EU member states. In the context of equal pay, the aforementioned aspect was applicable when the discrimination principle of the EU law was further extended to facilitate the equal pay of workers. Moreover, on the basis of the case law of European Court of Justice (ECJ), it can be affirmed that the general guidelines regarding the equal payment for both female as well as male employees rendered due consideration towards social objectives of growth and overall development. Discrimination of gender within the employment takes place when an employee obtains special treatments on the basis of various arbitrary criteria such as gender, religion, age, parental status, socio-economic background, race and political opinion. It is worth mentioning in this context that the notion, ‘discrimination’, was initiated within EU discourse in the form of restriction under the Article 18 TFEU. As per the EU commission, ‘Council Directive 75/117/EEC’ implemented policies obstructing gender discrimination affirming that there should be the equal pay for both men and women. Furthermore, Council Directive 76/207/EEC also executed certain guidelines regarding equal treatment for both the genders on the basis of extra pay, promotion, training and working situations2. In present business context, it has been observed that most of the working women in EU member states have to face ‘deep-rooted’ injustice within their workplace, compromising with lesser payment compared to their male colleagues irrespective of their similar job responsibilities. Hence, equal treatment among the men and women workers have emerged as one of the significant aspects within the EU member states. It is in this context t ...Download file to see next pagesRead More
Share:
Cite this document
(“European union law Essay Example | Topics and Well Written Essays - 2500 words”, n.d.)
Retrieved from https://studentshare.org/law/1403668-european-union-law
(European Union Law Essay Example | Topics and Well Written Essays - 2500 Words)
https://studentshare.org/law/1403668-european-union-law.
“European Union Law Essay Example | Topics and Well Written Essays - 2500 Words”, n.d. https://studentshare.org/law/1403668-european-union-law.
Comments (0)
Click to create a comment or rate a document

In th...
8 Pages(2000 words)Case Study
sponsored ads
Save Your Time for More Important Things
Let us write or edit the essay on your topic "European union law" with a personal 20% discount.
GRAB THE BEST PAPER

Let us find you another Essay on topic European union law for FREE!