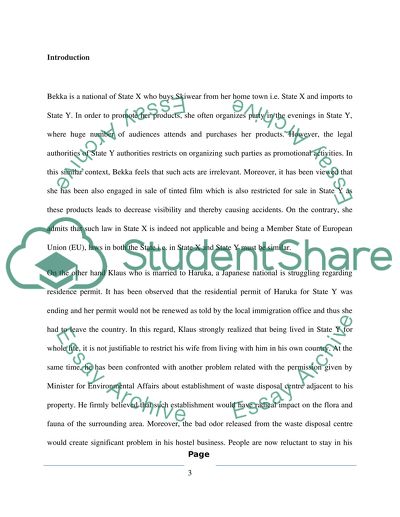 Download file to see previous pages In this similar context, Bekka feels that such acts are irrelevant. Moreover, it has been viewed that she has been also engaged in sale of tinted film which is also restricted for sale in State Y as these products leads to decrease visibility and thereby causing accidents. On the contrary, she admits that such law in State X is indeed not applicable and being a Member State of European Union (EU), laws in both the State i.e. in State X and State Y must be similar. On the other hand Klaus who is married to Haruka, a Japanese national is struggling regarding residence permit. It has been observed that the residential permit of Haruka for State Y was ending and her permit would not be renewed as told by the local immigration office and thus she had to leave the country. In this regard, Klaus strongly realized that being lived in State Y for whole life, it is not justifiable to restrict his wife from living with him in his own country. At the same time, he has been confronted with another problem related with the permission given by Minister for Environmental Affairs about establishment of waste disposal centre adjacent to his property. He firmly believed that such establishment would have radical impact on the flora and fauna of the surrounding area. Moreover, the bad odor released from the waste disposal centre would create significant problem in his hostel business. People are now reluctant to stay in his hostel and further he feels that waste disposal centre should be closed or shifted to another area. Contextually, the paper closely evaluates certain issues of law related with the case of Bekka and Klaus and advise them relating to their concerned matter. Issues Related with EU Law (Bekka) The open movement of goods is one of the critical factors leading towards the success of the EU Member States. The internal business market within the European Union makes easy to buy and sell goods in different Member States. A single European marketplace provides a strong platform in an open and competitive environment1. From lawful standpoint, it can be stated that the principle of free trade of goods is a main element in developing internal business market in the EU. It is viewed to be one of the economic autonomies that frame by the Member States of the EU. The EU defines the scope and content of the principle by prohibiting unjustified restrictions on intra-EU trade. Many of the vital restrictions on free movement of goods have been removed over the years to facilitate smooth functioning of EU trade. The prohibition of any products needs to be justified on the grounds of public ethics, public protection and protection of health as well as life of human, animals and plants. Contextually, member states may possess the right to ban any product on the basis of morality grounds. Therefore, EU law prescribed that goods brought from one state must comply with the national provisions concerning morality factor of the state where the product is being sold. Another important ground for restraint of free movement of goods can be acceptable on the basis of life as well as health of humans. EU law states that any Member States can impose barriers on any kind of products that affects national health and life of human, animal and plants. EU law also ensures safety of customers against deceptive advertisements. EU law also proclaimed that the authorities in one state cannot curtail customers from buying goods of ...Download file to see next pages Read More
Share:
Tags
Cite this document
(“EU Law problem scenario Essay Example | Topics and Well Written Essays - 2500 words”, n.d.)
EU Law problem scenario Essay Example | Topics and Well Written Essays - 2500 words. Retrieved from https://studentshare.org/law/1403541-eu-law-problem-scenario

In th...
8 Pages (2000 words) Case Study
sponsored ads
Save Your Time for More Important Things
Let us write or edit the essay on your topic "EU Law problem scenario" with a personal 20% discount.
GRAB THE BEST PAPER

Let us find you another Essay on topic EU Law problem scenario for FREE!