Comments (0)
Add to wishlistDelete from wishlist
Cite this document
Summary
Company Law Student: Course Name: Instructor: Institution: Department: Date: This paper is intended to discuss the legal stand of the case of XYZ Ltd. and the implications arising from different issues therein. Below is a discussion of the facts discovered in the case, the legal issues arising from the facts and a discussion to each issue with relation to possible outcomes from each case scenario should a legal proceeding arise from any of them with accordance to company law in the United Kingdom and more specifically the Companies Act 2006 chapter forty six…
Download full paperFile format: .doc, available for editing
HIDE THIS PAPERGRAB THE BEST PAPER91.5% of users find it useful 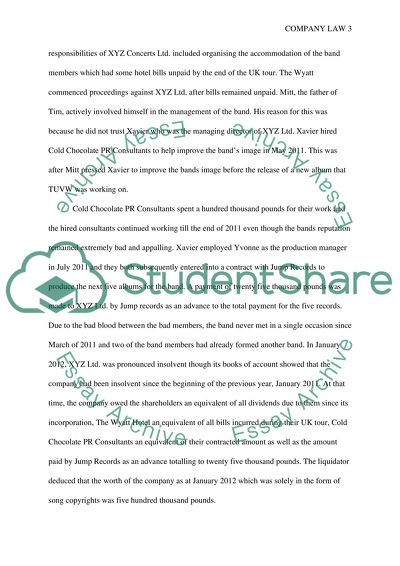 Download file to see previous pages had shares with a nominal value of two hundred and fifty thousand pounds which were divided equally among the four founders. XYZ Ltd. was to own all the copyrights for band’s songs which were given to the company as a consideration for the allotted shares. The four shareholders also were the directors of XYZ Ltd. Employment of Xavier as the managing director of the company followed where he was to receive an annual salary of two hundred and fifty thousand pounds. Distributable yearly profits by the company were to be paid to the shareholders as dividends but the shareholders never received a single payment in dividends. Personal issues arose amongst the band members and this brought about differences between some XYZ Ltd.’s shareholders and directors causing the band members to split and form a new band. XYZ Ltd.’s existence had led to the formation of another company XYZ Concerts Ltd. to manage and run a performance tour that was to be TUVW band in the UK in 2010. All issued shares of XYZ Concerts Ltd were held by the mother company, XYZ Ltd. The responsibilities of XYZ Concerts Ltd. ...
Xavier hired Cold Chocolate PR Consultants to help improve the band’s image in May 2011. This was after Mitt pressed Xavier to improve the bands image before the release of a new album that TUVW was working on. Cold Chocolate PR Consultants spent a hundred thousand pounds for their work and the hired consultants continued working till the end of 2011 even though the bands reputation remained extremely bad and appalling. Xavier employed Yvonne as the production manager in July 2011 and they both subsequently entered into a contract with Jump Records to produce the next five albums for the band. A payment of twenty five thousand pounds was made to XYZ Ltd. by Jump records as an advance to the total payment for the five records. Due to the bad blood between the bad members, the band never met in a single occasion since March of 2011 and two of the band members had already formed another band. In January 2012, XYZ Ltd. was pronounced insolvent though its books of account showed that the company had been insolvent since the beginning of the previous year, January 2011. At that time, the company owed the shareholders an equivalent of all dividends due to them since its incorporation, The Wyatt Hotel an equivalent of all bills incurred during their UK tour, Cold Chocolate PR Consultants an equivalent of their contracted amount as well as the amount paid by Jump Records as an advance totalling to twenty five thousand pounds. The liquidator deduced that the worth of the company as at January 2012 which was solely in the form of song copyrights was five hundred thousand pounds. Some of the issues arising in this case are discussed hereafter. First and foremost, no dividends were paid to any of the shareholders of XYZ Ltd. since its incorporation in ...Download file to see next pagesRead More
Share:
Tags
Cite this document
(“Company Law Essay Example | Topics and Well Written Essays - 4000 words - 1”, n.d.)
Retrieved from https://studentshare.org/law/1403155-company-law

In th...
8 Pages(2000 words)Case Study
sponsored ads
Save Your Time for More Important Things
Let us write or edit the essay on your topic "Company Law" with a personal 20% discount.
GRAB THE BEST PAPER