Comments (0)
Add to wishlistDelete from wishlist
Cite this document
Summary
Negligence in medical malpractice based in medical law
On the part of doctors, nurses and medical care professionals in hospitals may result in patient harm / injury and even death. Damages caused by medical mistakes in health centers can lead to future health problems, additional hospital bills and psychological distress…
Download full paperFile format: .doc, available for editing
HIDE THIS PAPERGRAB THE BEST PAPER96.5% of users find it useful 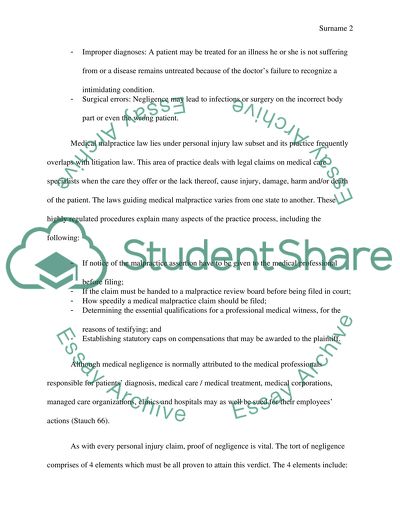 Extract of sample "Negligence in medical malpractice based in medical law"

Download file to see previous pages In the worst instance, a hospital error causes death of a patient, bringing about grief and financial strain on the deceased’s relatives (Andrew Grubb 445). A wrongful-death lawsuit can be filed to demand damages for lost wages and suffering or pain.
Examples of hospital errors that could result in medical malpractice include:
- Birth injuries: Improper labor services resulting injury to a baby, at times leading to complications such as Erb’s palsy or cerebral palsy.
- Prescription errors: This may be over or under medication, or administration of the wrong drug.
- Improper diagnoses: A patient may be treated for an illness he or she is not suffering from or a disease remains untreated because of the doctor’s failure to recognize a intimidating condition.
- Surgical errors: Negligence may lead to infections or surgery on the incorrect body part or even the wrong patient.
Medical malpractice law lies under personal injury law subset and its practice frequently overlaps with litigation law. This area of practice deals with legal claims on medical care specialists when the care they offer or the lack thereof, cause injury, damage, harm and/or death of the patient. The laws guiding medical malpractice varies from one state to another. These highly regulated procedures explain many aspects of the practice process, including the following:
- If notice of the malpractice assertion have to be given to the medical professional before filing;
- If the claim must be handed to a malpractice review board before being filed in court; How speedily a medical malpractice claim should be filed; Determining the essential qualifications for a professional medical witness, for the reasons of testifying; and Establishing statutory caps on compensations that may be awarded to the plaintiff. Although medical negligence is normally attributed to the medical professionals responsible for patients’ diagnosis, medical care / medical treatment, medical corporations, managed care organizations, clinics and hospitals may as well be sued for their employees’ actions (Stauch 66). As with every personal injury claim, proof of negligence is vital. The tort of negligence comprises of 4 elements which must be all proven to attain this verdict. The 4 elements include: (i) There was a duty of medical care owed; (ii) The medical care professional desecrated the standard of care obliged, which demonstrated negligence; (iii) This negligence by the medical professional caused the injury /harm; and (iv) There were compensable damages directly resulted from the injury/harm suffered . Since there is a patient - doctor relationship, the first element is usually already established in these kinds of claims. For the 2nd element, if there is no an obvious and glaring blunder, expert witness testimony is commonly implemented to prove the negligent behavior or actions. The complainants are the party passing the action and they bear the burden of attesting these elements in their claims against the medical care giver, the defendant (Smith). Medical malpractice claims are the subject of extreme controversy. Healthcare professionals and medical care businesses have encouraged legal reforms meant to eradicate big money awards for health damages, claiming that defending a case against the various lawsuits and the exorbitant compensations have resulted in a costly healthcare costs. In some states, this aggressive advocacy for these measures has resulted to ...Download file to see next pagesRead More
Share:
Tags
Cite this document
(“Negligence in medical malpractice based in medical law Research Paper”, n.d.)
Retrieved from https://studentshare.org/law/1402844-negligence-in-medical-malpractice-based-in-medical

“Negligence in Medical Malpractice Based in Medical Law Research Paper”, n.d. https://studentshare.org/law/1402844-negligence-in-medical-malpractice-based-in-medical.
Comments (0)
Click to create a comment or rate a document

In th...
8 Pages(2000 words)Case Study
sponsored ads
Save Your Time for More Important Things
Let us write or edit the research paper on your topic "Negligence in medical malpractice based in medical law" with a personal 20% discount.
GRAB THE BEST PAPER

Let us find you another Research Paper on topic Negligence in medical malpractice based in medical law for FREE!