Comments (0)
Add to wishlistDelete from wishlist
Cite this document
Summary
Despite the fact that the individual can be regarded as a subject of Community law under the canons of direct effect and as a resident of the Union under the TEU , but the framework of the Community law pertaining to the individual judicial safeguard of his right has not been analogues…
Download full paperFile format: .doc, available for editing
HIDE THIS PAPERGRAB THE BEST PAPER94.1% of users find it useful 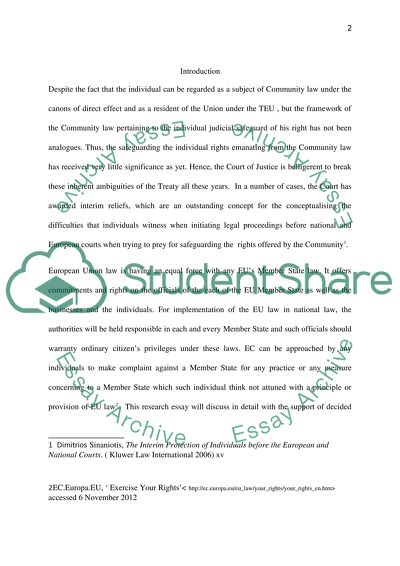 Download file to see previous pages In a number of cases, the Court has awarded interim reliefs, which are an outstanding concept for the conceptualising the difficulties that individuals witness when initiating legal proceedings before national and European courts when trying to prey for safeguarding the rights offered by the Community .
European Union law is having an equal force with any EU’s Member State law. It offers commitments and rights on the officials of the each of the EU Member State as well as the businesses and the individuals. For implementation of the EU law in national law, the authorities will be held responsible in each and every Member State and such officials should warranty ordinary citizen’s privileges under these laws. EC can be approached by any individuals to make complaint against a Member State for any practice or any measure concerning to a Member State which such individual think not attuned with a principle or provision of EU law . This research essay will discuss in detail with the support of decided legal cases and academic opinion about the ability of Individuals to enforce their rights under EU law before national courts.
“Direct, Vertical and Horizontal Effect “
The canon of direct effect facilitates an individual to cite a European legal provision either before the European court or national court. However, direct effect is applicable only to some European regulations and is subject to many stipulations. Direct effect facilitates individuals immediately to refer EU regulations before state courts, despite the fact whether national law test exist or not. Hence, the direct impact guarantees the effectiveness and application of EU laws in the Member States. However, there are many conditions imposed so as to make a European law to be applicable instantly. Further, the direct effect may only relevant as to relations between a person and the Member State or be extended to relations between individuals. The direct effect has been preserved by the ECJ in the landmark case Van Gend en Loos3 in 1963. In this verdict, ECJ held that individuals do have rights and also impose some obligations on EU Member States as regards to individuals’ rights. Hence, individual may derive benefits from these privileges and can directly employ European legislations before European and national courts. Nonetheless, there is no obligation on the part of the Member States to adopt the concerned EU Act into its internal legal setup. It is to be noted that there are two features to direct effect namely a horizontal feature and a vertical feature. Horizontal direct effect connotes affairs between individuals which involve that a person can employ a European law as regards to another person. Vertical direct impact connotes the relationship between the State and the individuals. The ECJ has acknowledged either a partial direct impact which is restricted to the vertical direct impact or a full direct impact which has a horizontal direct impact as well as a vertical direct effect4. In Van Duyn5 case, it was observed by the European Court that while the EU regulations may have their direct effects, the EU directives may not have ...Download file to see next pagesRead More
Share:
Tags
Cite this document
(“The ability of individuals to enforce their rights under EU law before Essay”, n.d.)
Retrieved from https://studentshare.org/law/1402242-eu-law

(The Ability of Individuals to Enforce Their Rights under EU Law before Essay)
https://studentshare.org/law/1402242-eu-law.

“The Ability of Individuals to Enforce Their Rights under EU Law before Essay”, n.d. https://studentshare.org/law/1402242-eu-law.
Comments (0)
Click to create a comment or rate a document

In th...
8 Pages(2000 words)Case Study
sponsored ads
Save Your Time for More Important Things
Let us write or edit the essay on your topic "The ability of individuals to enforce their rights under EU law before national courts" with a personal 20% discount.
GRAB THE BEST PAPER

Let us find you another Essay on topic The ability of individuals to enforce their rights under EU law before national courts for FREE!