Comments (0)
Add to wishlistDelete from wishlist
Cite this document
Summary
In this study, the relationship of social justice along with the operations of the system of criminal justice and the prevalent criminal as well as social justice theories with regard to the United States Constitution will be taken into concern. …
Download full paperFile format: .doc, available for editing
HIDE THIS PAPERGRAB THE BEST PAPER91.4% of users find it useful 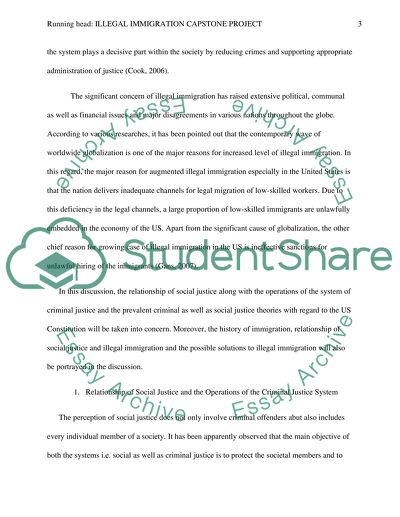 Extract of sample "The perception of social justice"

Download file to see previous pages From this research it is clear that the approach of social justice broadly focuses upon delivering equality to every member of the society. It not only engages particularly the criminal offenders but also encompasses all societal members. The major purpose of social justice is to provide equal financial, social and political opportunities as well as rights to all members within a community. In relation to the perception of social justice, it has been viewed that the social workers play an imperative part in protecting every societal member from any monetary abuse or any other social injustices. Conversely, the notion of criminal justice is fundamentally described as a valuable method which is exercised to mitigate especially the criminal offences. The system of criminal justice deals with the formation of effective governmental bodies which are comprised of court systems, correctional programs and law enforcement. These important agencies work collaboratively for the intention of delivering efficient governmental social control. This social control is duly achieved through lessening the level of crimes, enforcing relevant criminal laws and delivering proper administration of justice. The system of criminal justice generally emphasizes upon controlling as well as reducing crimes by establishing significant criminal policy measures. In this similar context, the two ultimate objectives of the system of criminal justice are lessening the level of criminal offences and preserving proper governance of justice. By focusing upon the objectives of the system of criminal justice structure, it can be stated that the system plays a decisive part within the society by reducing crimes and supporting appropriate administration of justice (Cook, 2006). The significant concern of illegal immigration has raised extensive political, communal as well as financial issues and major disagreements in various nations throughout the globe. According to various researches, it has been pointed out that the contemporary wave of worldwide globalization is one of the major reasons for increased level of illegal immigration. In this regard, the major reason for augmented illegal immigration especially in the United States is that the nation delivers inadequate channels for legal migration of low-skilled workers. Due to this deficiency in the legal channels, a large proportion of low-skilled immigrants are unlawfully embedded in the economy of the US. Apart from the significant cause of globalization, the other chief reason for growing case of illegal immigration in the US is ineffective sanctions for unlawful hiring of the immigrants (Gans, 2007). In this discussion, the relationship of social justice along with the operations of the system of criminal justice and the prevalent criminal as well as social justice theories with regard to the US Constitution will be taken into concern. Moreover, the history of immigration, relationship of social justice and illegal immigration and the possible solutions to illegal immigration will also be portrayed in the discussion. 1. Relationship of Social Justice and the Operations of the Criminal Justice System The perception of social justice does not only involve criminal offenders abut also includes every individual member of a society. It has been apparently observed that the main objective of both the systems i.e. social as well as criminal justice is to protect the societal members and to deliver equal opportunities as well as rights to them. This is possible due to the enforcement of applicable laws, reduction in the level of crimes and support of efficient management of justice. The criminal and the social justice are interrelated to each other as criminal ...Download file to see next pagesRead More
Share:
Cite this document
(“The perception of social justice Term Paper Example | Topics and Well Written Essays - 5000 words”, n.d.)
Retrieved from https://studentshare.org/law/1401968-the-perception-of-social-justice
(The Perception of Social Justice Term Paper Example | Topics and Well Written Essays - 5000 Words)
https://studentshare.org/law/1401968-the-perception-of-social-justice.
“The Perception of Social Justice Term Paper Example | Topics and Well Written Essays - 5000 Words”, n.d. https://studentshare.org/law/1401968-the-perception-of-social-justice.
Comments (0)
Click to create a comment or rate a document

CHECK THESE SAMPLES OF The perception of social justice

They are on trial and will be dealt with fairly. These laws ensure that no one, even if he or she has committed a crime is abused or punished cruelly.
Following the history of civilization like in china, we see the traces of systems for Criminal justice in order to provide safety for the citizens. Evolving through the years laws have been modified and changed to form the system that we know today.
From its start, the “U.S. criminal justice system” has advocated the idea of “checks and balances”. To avoid dictatorial rule, the people who founded this system in such a way that one person was not given control or authority completely to punish the criminals. The idea of assigning a ‘jury...
6 Pages(1500 words)Assignment
sponsored ads
Save Your Time for More Important Things
Let us write or edit the term paper on your topic "The perception of social justice" with a personal 20% discount.
GRAB THE BEST PAPER

Let us find you another Term Paper on topic The perception of social justice for FREE!