Comments (0)
Add to wishlistDelete from wishlist
Cite this document
Summary
International Trade Law There is a well argued consensus that the removal of the rainforest and converting the land for the oil palm plantations results in the rigorous release in vehement amount of greenhouse gases and with the loss of the rainforests imparts heavy pressure on several species of plants and animals among which many of them are endangered species (Earth’s Tree News, 2012) …
Download full paperFile format: .doc, available for editing
HIDE THIS PAPERGRAB THE BEST PAPER96.8% of users find it useful 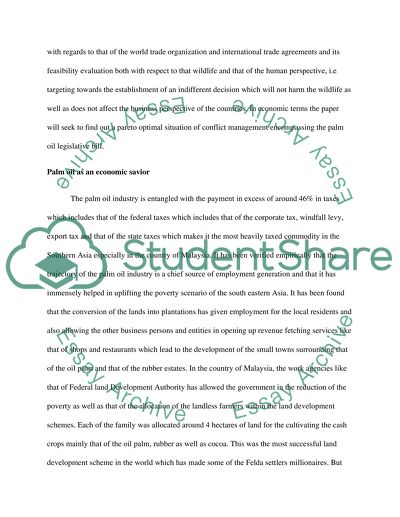 Download file to see previous pages The palm oil sector faces robust competition from the soybean and that of the rapeseed producers adding to the grave concerns of deforestation, killing and destruction of the wildlife with the devastation of the life of the orangutans and many wild life species and that of the carbon emission that results from clearing the peat land (Chow, 2011, p.24). Thus the controversy has cropped up regarding the usage of the palm oil and the Australian government in 2011with a group of senators including Nick Xenohpon introduced the Food Standards amendment bill to the Senate. If the bill is legalized then the manufacturers will be required to accurately label the Palm oil among its ingredients. The Bill would have allowed the manufacturers in indicating via labeling in a way such that whether palm oil used in a product is certified sustainable or not. It was also mandated that the consumers who have been able to choose to purchase products containing palm oil should be produced in a sustainable way keeping in parity with the International Roundtable on the sustainable palm oil. The paper will deal with the arguments relating to that of the passing of the palm oil bill and its implications with regards to that of the world trade organization and international trade agreements and its feasibility evaluation both with respect to that wildlife and that of the human perspective, i.e targeting towards the establishment of an indifferent decision which will not harm the wildlife as well as does not affect the business perspective of the countries. In economic terms the paper will seek to find out a pareto optimal situation of conflict management encompassing the palm oil legislative bill. Palm oil as an economic savior The palm oil industry is entangled with the payment in excess of around 46% in taxes which includes that of the federal taxes which includes that of the corporate tax, windfall levy, export tax and that of the state taxes which makes it the most heavily taxed commodity in the Southern Asia especially in the country of Malaysia. It has been verified empirically that the trajectory of the palm oil industry is a chief source of employment generation and that it has immensely helped in uplifting the poverty scenario of the south eastern Asia. It has been found that the conversion of the lands into plantations has given employment for the local residents and also allowing the other business persons and entities in opening up revenue fetching services like that of shops and restaurants which lead to the development of the small towns surrounding that of the oil palm and that of the rubber estates. In the country of Malaysia, the work agencies like that of Federal land Development Autbority has allowed the government in the reduction of the poverty as well as that of the allocation of the landless farmers within the land development schemes. Each of the family was allocated around 4 hectares of land for the cultivating the cash crops mainly that of the oil palm, rubber as well as cocoa. This was the most successful land development scheme in the world which has made some of the Felda settlers millionaires. But despite all of these development around 63% of the Malaysian land is still covered with the oldest rain forests in the world where the industry of ...Download file to see next pagesRead More
Share:
Cite this document
(“International Trade Law: Palm oil as an economic savior Assignment”, n.d.)
International Trade Law: Palm oil as an economic savior Assignment. Retrieved from https://studentshare.org/law/1400911-international-trade-law
(International Trade Law: Palm Oil As an Economic Savior Assignment)
International Trade Law: Palm Oil As an Economic Savior Assignment. https://studentshare.org/law/1400911-international-trade-law.
“International Trade Law: Palm Oil As an Economic Savior Assignment”, n.d. https://studentshare.org/law/1400911-international-trade-law.
Comments (0)
Click to create a comment or rate a document

CHECK THESE SAMPLES OF International Trade Law: Palm oil as an economic savior

As a matter of fact, Hoffman’s statement that “international affairs is the nemesis of liberalism” has a grain of truth in it and this is especially so after the 9/11 incident.
There are two schools of thought or perspectives that are used to view international affairs: liberalism and realism. The study of these two perspectives is significant to the idea posed by Stanley Hoffman because they determine the reasons why international affairs, according to him, does not only see eye-to-eye with liberalism but seems to stand on the opposing side of it.
Liberalism can be defined as having four elements: citizens; the legislature; property rights, and; a market-driven economy (Dunne 186). Realism, on the othe...
6 Pages(1500 words)Assignment
sponsored ads
Save Your Time for More Important Things
Let us write or edit the assignment on your topic "International Trade Law: Palm oil as an economic savior" with a personal 20% discount.
GRAB THE BEST PAPER

Let us find you another Assignment on topic International Trade Law: Palm oil as an economic savior for FREE!