Comments (0)
Add to wishlistDelete from wishlist
Cite this document
Summary
The author of this paper "Federal Law in the United Arab Emirates" focuses on the United Arab Emirates that have traveled a long way since the creation of their federation. Admittedly, the federation has assisted the Emirates in making a big leap, especially in terms of economic stability…
Download full paperFile format: .doc, available for editing
HIDE THIS PAPERGRAB THE BEST PAPER91.3% of users find it useful 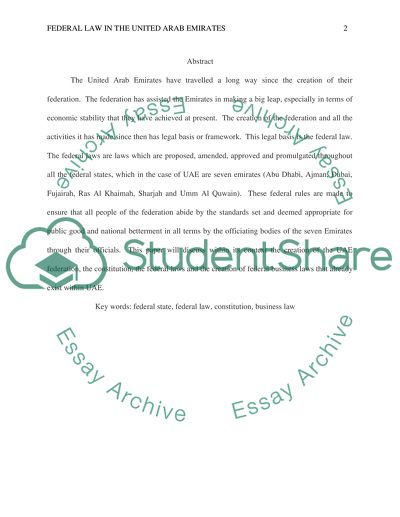 Extract of sample "Federal Law in the United Arab Emirates"

Download file to see previous pages The UAE federal rules are made to ensure that all people of the federation abide by the standards set and deemed appropriate for the public good and national betterment in all terms by the officiating bodies of the seven Emirates through their officials. This paper will discuss within its context the creation of the UAE federation, the constitution, the federal laws and the creation of federal business laws that already exist within UAE.
The UAE is a federation of seven Emirates comprising Abu Dhabi, Ajman, Dubai, Fujairah, Ras Al Khaimah, Sharjah, and Umm Al Quwain. It was formed on the 2nd of December 1971 (Latham & Watkins LLP, 2011, p. 1). The UAE federal constitution was adopted and accepted in 1996. It ensures the allocation of powers between the federal government and the government of each Emirate. It is one of the largest countries in the Gulf with a land area that extends to 83,000 square kilometers and a population of 2.6 million (Gulf Law, 2011). Ethnicities that comprise the total population of the United Arab Emirates are: Indians with a total census of 1.75 million, Pakistani with 1.25 million counts, Bangladeshi at a rate of 500,000, other inhabitants of Asian origin amount to one million according to the census, European and African comprising 500,000, while the population of Emirati amounts to 890,000. Majority of the people in UAE are Muslims at the rate of 96% compared to the Hindu and Christian sects present in the country. The official language is Arabic though English, Hindi, Urdu, Bengali are also used widely (U. S. Department of State, Bureau of Near Eastern Affairs, 2011). The Government There is still an independent type of governance in each Emirate since the UAE is a loose federation of seven Emirates with its own ruler in each of them. Under the provisional constitution of 1971, each Emirate controls its own activities and reserves considerable powers including control over mineral rights, such as oil and gas, as well as revenues. But over time the federal powers have developed slowly and the constitution has established set of rules under the creation of President as the chief of state and Vice President as second of rule, each having a fixed term of 5-year service. Other members of the government includes: a Council of Ministers, led by a Prime Minister as the head of the government; a supreme council of rulers; and a Federal National Council of 40 members wherein 20 members are appointed by the Emirate rulers and another half of 20 members are elected through an electorate by the rulers of each emirate (U.S. Department of State, Bureau of Near Eastern Affairs, 2011). Within a remarkably short span of time since the creation of the federation, the United Arab Emirates managed to create a stable country with a booming economy based on free trade. Today the economic status of UAE has earned it a reputation as one of the leading economic icons in the Middle East. This is one of the main reasons why lots of people and business builders and investors thrive to work or build businesses within boundaries of the Federation. The reputation of the Emirates as a free trade area was enhanced with rapidly developing free zones and the oil production that helped to maintain the development momentum (Gulf Law, 2011). As in every nation, the constitution is the legal framework for the federation and is the basis of all laws and legislation promulgated at a federal and Emirate level.   ...Download file to see next pagesRead More
Share:
Tags
Cite this document
(Federal Law in the United Arab Emirates Research Paper, n.d.)
Federal Law in the United Arab Emirates Research Paper. Retrieved from https://studentshare.org/law/1399111-introduction-to-business-law

CHECK THESE SAMPLES OF Federal Law in the United Arab Emirates

Despite the few negative incidences of crime committed by the United States of America’s security troops that were deployed in the country on a peacekeeping mission.
Since the war in Korea began in the early nineteen fifties, the United States has stationed tens of thousands of soldiers, mostly the United States’ army personnel, in South Korea. Through the assistance of the South Korean troops and other neighboring governments, the American troops have been able to guard and offer maximum security to South Korean people. In line with the argument of James (2003), ‘most of the military bases in South Korea are relatively isolated’ thus the need for much attention from the troops so as to ensure maximum...
10 Pages(2500 words)Assignment
sponsored ads
Save Your Time for More Important Things
Let us write or edit the research paper on your topic "Federal Law in the United Arab Emirates" with a personal 20% discount.
GRAB THE BEST PAPER

Let us find you another Research Paper on topic Federal Law in the United Arab Emirates for FREE!