Comments (0)
Add to wishlist Delete from wishlist
Cite this document
Summary
This paper focuses on forced marriage as a component of UK family law. The paper identifies that forced marriages are marriages that are arranged through duress. In the UK, this is common amongst migrant communities especially migrants with origins to the Indian subcontinent and the Arab world. …
Download full paper File format: .doc, available for editing
HIDE THIS PAPERGRAB THE BEST PAPER96.5% of users find it useful 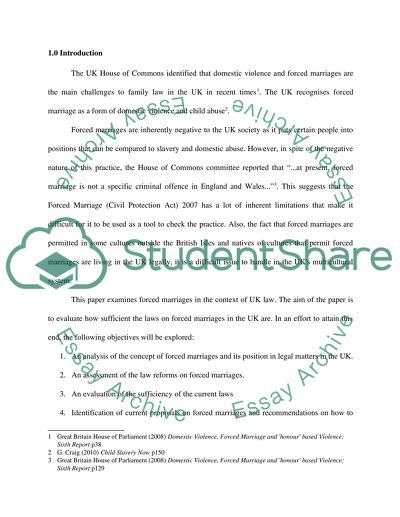 Download file to see previous pages This essay stresses that forced marriages involve the use of threats to get people to enter marriages against the will. Existing UK laws on marriage render such marriages null but voidable. There is no existing criminal liability for partaking in the imposition of forced marriages. Legal reforms have created a civil provision to combat forced marriages. However, this leaves much to be desired. This is because there is a general problem of fear and sympathy for perpetrators by victims because of the familial links that exist between them. In order to prevent forced marriage, it is recommended that there should be a separate criminal law that would complement the criminal statute. Debate should however continue on this subject. This is necessary because there is the need for new issues and situations in the UK society to be integrated into the legal statute to protect the vulnerable appropriately at every point in time. This paper examines forced marriages in the context of UK law. The aim of the paper is to evaluate how sufficient the laws on forced marriages in the UK are.
This paper makes a conclusion that the UK House of Commons identified that domestic violence and forced marriages are the main challenges to family law in the UK in recent times. The UK recognises forced marriage as a form of domestic violence and child abuse. The UK social and legal system makes a sharp distinction between forced marriages and arranged marriages . This distinction is necessary because arranged marriages have a bit of a different legal position in the UK society. This is mainly steeped in the concept of choice. Whereas the parties in an arranged marriage might choose to live within the marriage without any duress, a forced marriage is one where one party is forced or coerced into the whole union. 'Duress' defines the main basis for the definition of a forced marriage. As such, a marriage in which duress is not used to coerce one or both parties into the marriage is valid socially, morally and legally in English law. 2.2 Forms of Forced Marriages There are three main types of forced marriages6: 1. An individual who fears that s/he may be forced to marry in the UK ...Download file to see next pages Read More
Share:
Tags
Cite this document
(“Forced Marriages and UK Law Essay Example | Topics and Well Written Essays - 4000 words”, n.d.)
Retrieved from https://studentshare.org/law/1398735-forced-marriages-and-uk-law

CHECK THESE SAMPLES OF Forced Marriages and UK Law

In th...
8 Pages (2000 words) Case Study
sponsored ads
Save Your Time for More Important Things
Let us write or edit the essay on your topic "Forced Marriages and UK Law" with a personal 20% discount.
GRAB THE BEST PAPER

Let us find you another Essay on topic Forced Marriages and UK Law for FREE!