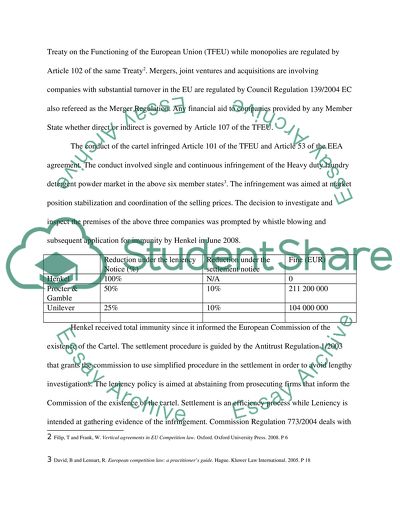 Download file to see previous pages In the final outcome, Procter and Gamble and Unilever paid a reduced fine of EUR 315 200 000 while Henkel benefitted from immunity as the whistleblower. The Treaty of Lisbon prohibits anti-competitive practices under Article 101 (1) including any agreements relating to price-fixing. However, Article 103 (3) provides for exemptions if the market collusion is intended for technological innovation and distribution or when the agreement results to consumers’ a “fair share” of benefits or when the agreement does not risk elimination of competition in anyway1. Article 102 prohibits the dominant players from abusing their market power and strengths from exclusive dealing and discrimination in trade. The main purpose of cartels is to regulate the production, distributing and pricing of goods and services thus hindering free competition in the industry. Control of collusion and anti-competitive practices are governed by Article 101of the Treaty on the Functioning of the European Union (TFEU) while monopolies are regulated by Article 102 of the same Treaty2. Mergers, joint ventures and acquisitions are involving companies with substantial turnover in the EU are regulated by Council Regulation 139/2004 EC also refereed as the Merger Regulation. Any financial aid to companies provided by any Member State whether direct or indirect is governed by Article 107 of the TFEU. The conduct of the cartel infringed Article 101 of the TFEU and Article 53 of the EEA agreement. The conduct involved single and continuous infringement of the Heavy duty laundry detergent powder market in the above six member states3. The infringement was aimed at market position stabilization and coordination of the selling prices. The decision to investigate and inspect the premises of the above three companies was prompted by whistle blowing and subsequent application for immunity by Henkel in June 2008. Reduction under the leniency Notice (%) Reduction under the settlement notice Fine (EUR) Henkel 100% N/A 0 Procter & Gamble 50% 10% 211 200 000 Unilever 25% 10% 104 000 000 Henkel received total immunity since it informed the European Commission of the existence of the Cartel. The settlement procedure is guided by the Antitrust Regulation 1/2003 that grants the commission to use simplified procedure in the settlement in order to avoid lengthy investigations. The leniency policy is aimed at abstaining from prosecuting firms that inform the Commission of the existence of the cartel. Settlement is an efficiency process while Leniency is intended at gathering evidence of the infringement. Commission Regulation 773/2004 deals with the powers of the commissions, the complaints, rights and access to file. The regulation deals with the Leniency Notice 2006, guidelines for fines and the notice for co-operation with authorities4. The settlement policy requires an admission of guilt from the companies involved and requires the parties to immediately desist from the anti-competitive behaviour. The settlement procedure is only applicable to cartel cases. The settlement Notice rewards the parties for cooperation in the process. All parties benefit from a 10 percent reduction in fines since they contribute adequately to the settlement procedure5. In the above case, Henkel submitted immunity application in May 2008 and was granted conditional immunity in June 2008. According to Article 11 (6) of Regulation (EC) 1/2003, all the parties were invited to the bilateral settlement discussions in 2009. The parties were granted the files with evidence and an estimation of the possible fines during the discussions in June 2010. According to Article 10 (a) of Regulation (E ...Download file to see next pagesRead More
Share:
Tags
Cite this document
(“EU Competition law and Cartels Essay Example | Topics and Well Written Essays - 2500 words”, n.d.)
Retrieved from https://studentshare.org/law/1398666-competetion-law
(EU Competition Law and Cartels Essay Example | Topics and Well Written Essays - 2500 Words)
https://studentshare.org/law/1398666-competetion-law.
“EU Competition Law and Cartels Essay Example | Topics and Well Written Essays - 2500 Words”, n.d. https://studentshare.org/law/1398666-competetion-law.
Comments (0)
Click to create a comment or rate a document

CHECK THESE SAMPLES OF EU Competition law and Cartels

In th...
8 Pages(2000 words)Case Study
sponsored ads
Save Your Time for More Important Things
Let us write or edit the essay on your topic "EU Competition law and Cartels" with a personal 20% discount.
GRAB THE BEST PAPER

Let us find you another Essay on topic EU Competition law and Cartels for FREE!