Comments (0)
Add to wishlistDelete from wishlist
Cite this document
Summary
A company acquires its legal personality after registration under the companies Act. Through incorporation, a company becomes a legal entity separate and distinct from its members who are the shareholders. The company registration constitutes it “a body corporate.” It becomes a “legal person”…
Download full paperFile format: .doc, available for editing
HIDE THIS PAPERGRAB THE BEST PAPER92.3% of users find it useful 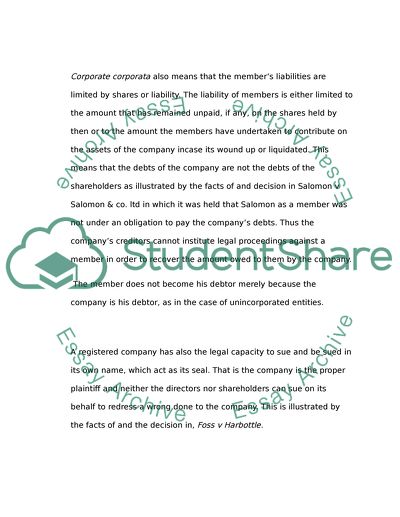 Download file to see previous pages In Salomon’s case, Lord Halsberury stated that “once the company is incorporated it must be treated like any other independent person with rights and liabilities appropriate to itself”. This means that the company as independent person has rights and obligations which are not the same as the rights and obligations of its member. This the fundamental attribute of corporate personality. Incorporation has both economical and social consequences on a company after being registered.
For instance, the company has a perpetual life existence as its life does not depend on the life of its members. The company’s membership changes in a definite order prescribed by the company’s article and subject to changes indefinite period of time until the company’s liquidation. The membership is transferable from one member to another as long as the entity is a going concern.
Corporate corporata also means that the member’s liabilities are limited by shares or liability. The liability of members is either limited to the amount that has remained unpaid, if any, on the shares held by then or to the amount the members have undertaken to contribute on the assets of the company incase its wound up or liquidated. This means that the debts of the company are not the debts of the shareholders as illustrated by the facts of and decision in Salomon v Salomon & co. ltd in which it was held that Salomon as a member was not under an obligation to pay the company’s debts. Thus the company’s creditors cannot institute legal proceedings against a member in order to recover the amount owed to them by the company. The member does not become his debtor merely because the company is his debtor, as in the case of unincorporated entities. A registered company has also the legal capacity to sue and be sued in its own name, which act as its seal. That is the company is the proper plaintiff and neither the directors nor shareholders can sue on its behalf to redress a wrong done to the company. This is illustrated by the facts of and the decision in, Foss v Harbottle. A limited company has also the capacity and the ability to buy, own or sale property in its own name, thus the company’s property does not belong to the members as per the case of Macaura v Northern Assurance Company. Thus, if the directors or the shareholders take the company’s money to purchase personal effect or discharge personal liability will be liable to the company for conversion. This is explained in the case of A L Underwood Ltd v Bank of Liverpool. The directors only hold the money in trust on behalf of the company due to fiduciary relationship. Thus incorporation renders a company a distinct and separate legal entity unlike unincorporated entities such as sole proprietorship or partnership. This principle is what is referred to as, in common parlance, as corporate shield or veil of incorporation between the company and its members. Unveiling the corporate veil is the identification of the company with its members to hold individual members liable to their own acts for assistance of the authority or court to compel corporate legal entity to look unto real beneficial owners. The court may lift and/ or unveil where its essential to secure justice where deemed necessary but the rule of separate legal entity still remains the general principal except in exceptional cases. There are some instances under statutory provision or ...Download file to see next pagesRead More
Share:
Tags
Cite this document
(“Company law Essay Example | Topics and Well Written Essays - 3000 words”, n.d.)
Retrieved from https://studentshare.org/law/1398339-company-law