Based on 3 questions - Essay Example

Comments (0)
Add to wishlistDelete from wishlist
Cite this document
Summary
Business Law Name School Professor Subject Date QUESTION 1. Compare and contrast the effects of discharge of contract by breach with discharge of contract by frustration. Discharge of a contract refers to the process by which the primary obligations of the parties would come to an end…
Download full paperFile format: .doc, available for editing
HIDE THIS PAPERGRAB THE BEST PAPER98.4% of users find it useful 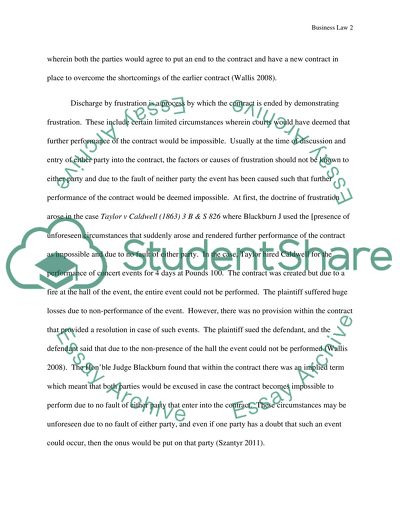 Extract of sample "Based on 3 questions"

Download file to see previous pages When discharge by frustration, there would be no secondary obligations, but there would be a need for restitution under the law. Other than discharge of the contract by performance, breach and frustration, the contract could also be discharged by agreement, wherein both the parties would agree to put an end to the contract and have a new contract in place to overcome the shortcomings of the earlier contract (Wallis 2008). Discharge by frustration is a process by which the contract is ended by demonstrating frustration. These include certain limited circumstances wherein courts would have deemed that further performance of the contract would be impossible. Usually at the time of discussion and entry of either party into the contract, the factors or causes of frustration should not be known to either party and due to the fault of neither party the event has been caused such that further performance of the contract would be deemed impossible. At first, the doctrine of frustration arose in the case Taylor v Caldwell (1863) 3 B & S 826 where Blackburn J used the [presence of unforeseen circumstances that suddenly arose and rendered further performance of the contract as impossible and due to no fault of either party. In the case, Taylor hired Caldwell for the performance of concert events for 4 days at Pounds 100. The contract was created but due to a fire at the hall of the event, the entire event could not be performed. The plaintiff suffered huge losses due to non-performance of the event. However, there was no provision within the contract that provided a resolution in case of such events. The plaintiff sued the defendant, and the defendant said that due to the non-presence of the hall the event could not be performed (Wallis 2008). The Hon’ble Judge Blackburn found that within the contract there was an implied term which meant that both parties would be excused in case the contract becomes impossible to perform due to no fault of either party that enter into the contract. These circumstances may be unforeseen due to no fault of either party, and even if one party has a doubt that such an event could occur, then the onus would be put on that party (Szantyr 2011). There may be four conditions for discharge of contract by frustration to be satisfied. It may occur as an unforeseen event, it should not be known to either party, it should make performance of the contract impossible and it should create a radically different situation from what was described in the earlier contract. Besides, there are 2 alternative tests for frustration including implied theory test and radical change test. The implied theory test was what was used in Taylor vs. Caldwell, whereas the radical change test was developed in the case Davis Contractors v Fareham UDC [1956] AC 696 (Wallis 2008). Discharge of contract by breach may include defective performance as well as non-performance and would be included either as a condition, warranty or innominate. In order to treat such breach as primary and to repudiate the contract, the opposing party should have breached the conditions and not the warranties. In case the warranties are breached, then the contracted cannot be discharged but since the secondary obligations are not fulfilled, damages can be sought (Law Teacher 2012). Unlike discharge by frustration, an anticipatory breach may arise when one party feels that the performance of the contract would be in doubt and have expressed their willingness to discharge the contract. The opposing ...Download file to see next pagesRead More
Share:
Tags
Cite this document
(“Based on 3 questions Essay Example | Topics and Well Written Essays - 2750 words”, n.d.)
Retrieved from https://studentshare.org/law/1398046-based-on
(Based on 3 Questions Essay Example | Topics and Well Written Essays - 2750 Words)
https://studentshare.org/law/1398046-based-on.
“Based on 3 Questions Essay Example | Topics and Well Written Essays - 2750 Words”, n.d. https://studentshare.org/law/1398046-based-on.
Comments (0)
Click to create a comment or rate a document

CHECK THESE SAMPLES OF Based on 3 questions

If the condition is not detected at birth with proper testing, symptoms usually occur within the first few days or weeks of life after the baby drinks breast milk or a lactose-containing formula. The buildup of galactose can cause severe damage to the liver, kidneys, central nervous system, and other body systems.
A less severe form of this disease is Duarte galactosemia or galactokinase deficiency. This condition can be managed with a few dietary restrictions, and there is no risk of neurologic or liver damage. However, cataracts can develop.
Following symptoms and signs are present: poor feeding and poor weight gain, vomiting and diarrhea, jaundice, cataracts, lethargy and hypotonia, hepatomegaly, encephalopathy, bulgi...
8 Pages(2000 words)Assignment

Setting up successful teams is a prerogative of any organization and in the business world of present times; it is very much a need rather than a desire. The businesses have changed so as to create more room for teams than individual working ethos. This has given space to more facilitation within the working environments of teams since they bring combined efforts and usage of more brains than a singular person. The factors that stand important in the wake of successful teams include a commitment towards common goals and a simplistic and solitary objective which must be kept in mind at all times. These factors underline the basis of the teams performing a singular whole than disjointed units within the framework of the organization...
6 Pages(1500 words)Report
sponsored ads
Save Your Time for More Important Things
Let us write or edit the essay on your topic "Based on 3 questions" with a personal 20% discount.
GRAB THE BEST PAPER

Let us find you another Essay on topic Based on 3 questions for FREE!