Comments (0)
Add to wishlist Delete from wishlist
Cite this document
Summary
The author of this research papaer mainly focuses on the discussion of topic of the validity of the persistent offender rule in international law. The researcher examines the article written by Omar Abasheikh about what he calls the “persistent offender rule”…
Download full paper File format: .doc, available for editing
HIDE THIS PAPERGRAB THE BEST PAPER94.8% of users find it useful 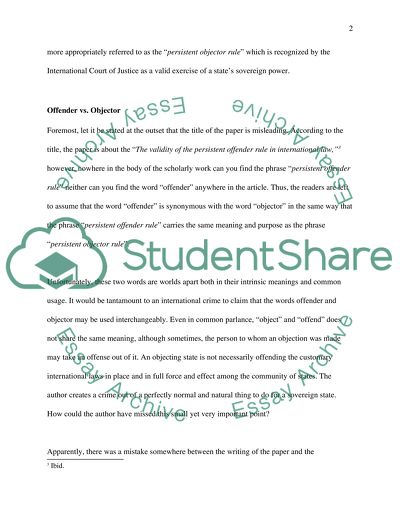 Download file to see previous pages It would be tantamount to an international crime to claim that the words offender and objector may be used interchangeably. Even in common parlance, “object” and “offend” does not share the same meaning, although sometimes, the person to whom an objection was made may take an offense out of it. An objecting state is not necessarily offending the customary international laws in place and in full force and effect among the community of states. The author creates a crime out of a perfectly normal and natural thing to do for a sovereign state. How could the author have missed this small yet very important point? Apparently, there was a mistake somewhere between the writing of the paper and the formulation of the title. A paper’s title is supposed to give the readers some idea about the body of the paper. But in this case, the title has become a cause for confusion because it is a totally different concept than the rest of the paper. Inconsistent Thesis Lest this review be regarded as a headhunt for flaws, the author is lauded for the extensive research he has done about the subject. He dug through cases and books as is evident in the amount of information and data that the paper contains. But enormous amounts of data are meaningless unless they are served and digested into coherent and logical conclusions. At one point, the author merely presented several opposing or corroborating statements without bothering to mention which one prevails pursuant to exiting international laws or jurisprudence from the International Court of Justice. But then again, the paper has no thesis statement, and if there was any, it was ambiguous and difficult to ascertain. Based on the title, the author is expected to make a stand as to...
The research paper "The validity of the persistent offender rule in international law" begins with an introduction to the topic. The author analyzes logical mistakes of Omar Abasheikh in description of "persistent offender rule" and criticizes the title of the paper, which doesn't fit to the sense of the research. After that the author shows advantages and disadvantages in the approach of the author and comes to interesting conclusions.

In the end the author sums up that “consent, whether express or tacit, is required for the formation of customary international law”1 and the persistent objector rule is a necessary and accepted feature of the system that works for the unique social setup of the international community of states. The persistent objector rule is a necessary tool that allows each state to tailor the international law to their particular needs and maximize their benefits.

Overall, the author deserves recognition for the amount of time and effort he had put into the paper. No one can deny the fact that he had presented a good volume of pertinent facts and information in the paper. However, the article is not without flaws, starting off with the wrong choice of word in the paper’s title. Then there is the lack of a clear thesis statement and inconsistent theories. The reader would get lost in translation amid the legal terminologies used in the paper. Nevertheless, the paper was very informative and could serve as a jump off point for further and in depth research into the subject. ...Download file to see next pages Read More
Share:
Tags
Cite this document
(“The Validity of The Persistent Offender Rule in International Law by Essay”, n.d.)
Retrieved from https://studentshare.org/law/1397615-the-validity-of-the-persistent-offender-rule-in-international-law-by-omar-abasheikh

(The Validity of The Persistent Offender Rule in International Law by Essay)
https://studentshare.org/law/1397615-the-validity-of-the-persistent-offender-rule-in-international-law-by-omar-abasheikh.

“The Validity of The Persistent Offender Rule in International Law by Essay”, n.d. https://studentshare.org/law/1397615-the-validity-of-the-persistent-offender-rule-in-international-law-by-omar-abasheikh.
Comments (0)
Click to create a comment or rate a document

As a matter of fact, Hoffman’s statement that “international affairs is the nemesis of liberalism” has a grain of truth in it and this is especially so after the 9/11 incident.
There are two schools of thought or perspectives that are used to view international affairs: liberalism and realism. The study of these two perspectives is significant to the idea posed by Stanley Hoffman because they determine the reasons why international affairs, according to him, does not only see eye-to-eye with liberalism but seems to stand on the opposing side of it.
Liberalism can be defined as having four elements: citizens; the legislature; property rights, and; a market-driven economy (Dunne 186). Realism, on the othe...
6 Pages (1500 words) Assignment
sponsored ads
Save Your Time for More Important Things
Let us write or edit the essay on your topic "The Validity of The Persistent Offender Rule in International Law by Omar Abasheikh" with a personal 20% discount.
GRAB THE BEST PAPER

Let us find you another Essay on topic The Validity of The Persistent Offender Rule in International Law by Omar Abasheikh for FREE!