Comments (0)
Add to wishlistDelete from wishlist
Cite this document
Summary
Intellectual Property Rights Infringements and Remedies in UK Law James & Jeremy vs. Richard Introduction James and Jeremy designed a car engine that runs entirely on electricity. They have invested a lot of time and money in designing the engine and would like to protect their ideas before they advertise their ‘revolutionary invention’…
Download full paperFile format: .doc, available for editing
HIDE THIS PAPERGRAB THE BEST PAPER92% of users find it useful 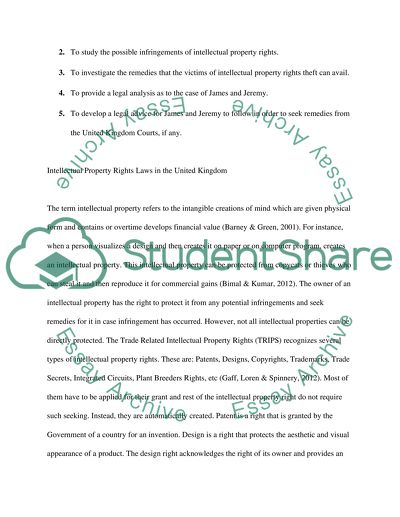 Download file to see previous pages James and Jeremy find out about the conversation after they receive phone calls from all three manufacturers. They are furious that he has consulted external companies without their consent. Aim This paper aims to investigate the potential infringements of intellectual property that James and Jeremy owned and to provide possible remedies that are available to them and to provide a legal advice to them for the future course of action. Objectives In order to achieve the aim of this paper, the paper will has following objectives to achieve: 1. To study the intellectual property rights in United Kingdom 2. To study the possible infringements of intellectual property rights. 3. To investigate the remedies that the victims of intellectual property rights theft can avail. 4. To provide a legal analysis as to the case of James and Jeremy. 5. To develop a legal advice for James and Jeremy to follow in order to seek remedies from the United Kingdom Courts, if any. Intellectual Property Rights Laws in the United Kingdom The term intellectual property refers to the intangible creations of mind which are given physical form and contains or overtime develops financial value (Barney & Green, 2001). For instance, when a person visualizes a design and then creates it on paper or on computer program, creates an intellectual property. This intellectual property can be protected from copycats or thieves who can steal it and then reproduce it for commercial gains (Bimal & Kumar, 2012). The owner of an intellectual property has the right to protect it from any potential infringements and seek remedies for it in case infringement has occurred. However, not all intellectual properties can be directly protected. The Trade Related Intellectual Property Rights (TRIPS) recognizes several types of intellectual property rights. These are: Patents, Designs, Copyrights, Trademarks, Trade Secrets, Integrated Circuits, Plant Breeders Rights, etc (Gaff, Loren & Spinnery, 2012). Most of them have to be applied for their grant and rest of the intellectual property right do not require such seeking. Instead, they are automatically created. Patent is a right that is granted by the Government of a country for an invention. Design is a right that protects the aesthetic and visual appearance of a product. The design right acknowledges the right of its owner and provides an exclusive right to make, use, copy, import or export or assign the design for any purpose he may deem fit. Copyrights is a right that is created automatically. It is a right not to copy a work that has been created by an author and has been reserved its ownership with that author. Trade secrets comprises of confidential information, documents, secret formulas, or any private information that if leaked to any one can create substantial loss to its owners (Chapman, 1986). For instance, the Coca Cola recipe is protected as a trade secret and has not been leaked for over a century now (Breach of Confidence, 2006). In case any of its employees or management who are privy to that secret formula have revealed the actual formula or sold it to someone for commercial gains would have incurred an intellectual property rights infringement (Risch, 2012). In legal terminology it is known as breach of confidence. In English law, the breach of confidence is derived from the doctrine of equity. Thus, a person whose confidence in another ...Download file to see next pagesRead More
Share:
Tags
Cite this document
(“Intellectual and Property Law Essay Example | Topics and Well Written Essays - 2500 words - 1”, n.d.)
Retrieved from https://studentshare.org/law/1396977-intellectual-and-property-law
(Intellectual and Property Law Essay Example | Topics and Well Written Essays - 2500 Words - 1)
https://studentshare.org/law/1396977-intellectual-and-property-law.
“Intellectual and Property Law Essay Example | Topics and Well Written Essays - 2500 Words - 1”, n.d. https://studentshare.org/law/1396977-intellectual-and-property-law.
Comments (0)
Click to create a comment or rate a document

CHECK THESE SAMPLES OF Intellectual and Property Law

In th...
8 Pages(2000 words)Case Study
sponsored ads
Save Your Time for More Important Things
Let us write or edit the essay on your topic "Intellectual and Property Law" with a personal 20% discount.
GRAB THE BEST PAPER

Let us find you another Essay on topic Intellectual and Property Law for FREE!