Comments (0)
Add to wishlist Delete from wishlist
Cite this document
Summary
IMMIGRATION AND ASSYLUM LAW Date Outline Introduction Definition of Immigration and Asylum The government’s efforts to curb immigration The aim of conservative party in controlling immigration Norah’s bid to seek for asylum Conclusion Introduction This paper is going to give an in depth look at the laws that have been put in place in order to check asylum and immigration…
Download full paper File format: .doc, available for editing
HIDE THIS PAPERGRAB THE BEST PAPER92.3% of users find it useful 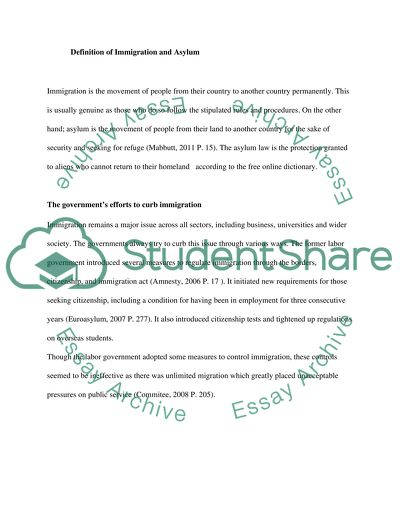 Download file to see previous pages This is usually genuine as those who do so follow the stipulated rules and procedures. On the other hand; asylum is the movement of people from their land to another country for the sake of security and seeking for refuge (Mabbutt, 2011 P. 15). The asylum law is the protection granted to aliens who cannot return to their homeland according to the free online dictionary. The government’s efforts to curb immigration Immigration remains a major issue across all sectors, including business, universities and wider society. The governments always try to curb this issue through various ways. The former labor government introduced several measures to regulate immigration through the borders, citizenship, and immigration act (Amnesty, 2006 P. 17 ). It initiated new requirements for those seeking citizenship, including a condition for having been in employment for three consecutive years (Euroasylum, 2007 P. 277). It also introduced citizenship tests and tightened up regulations on overseas students. Though the labor government adopted some measures to control immigration, these controls seemed to be ineffective as there was unlimited migration which greatly placed unacceptable pressures on public service (Commitee, 2008 P. 205). The aim of conservative party in controlling immigration The conservative government has declared that it is their aim to taking action to tackling immigration by reducing the level of net immigration to sustainable levels down from the hundreds of thousands to the tens of thousands within the lifetime of its parliament. They have laid down a strategic plan which they are going to use in order to achieve this objective (Population, 2011 P. 70). The conservative party aims to achieve this through a two stage process: Conservative party immigration policy: (Mabbutt, 2011 P. 27 ). The first stage is making eligible for admission those who will benefit the economy. The second stage is an annual limit to control the numbers admitted with regard to the wider effects on society and the provision of public services (Vision, 2008 P. 105). The conservative government also aims to apply the transitional controls in the future for all EU entrants To enforce such controls and to prevent illegal; immigration and to combat criminals who compromise their security, they will need a new, integrated approach to managing their borders. They thus introduce a dedicated border police force to bring together all the agencies responsible for border control (Currency, 2010 P. 75). The police force will have the power to stop, search, detain and prosecute the terrorist, traffickers and illegal immigrants who currently slip through the net .only then will be able to start making Britain safer. We have introduced the first ever cap on the number of non-EU economic migrants admitted into the UK to live and work. We have clamped down on abuses of the student visa route – the largest single immigration route and one which experienced widespread abuse (UNDP, 2010 P.77). We are considering how to reform the family visa route and will soon take action to do so. We will end the link between temporary routes and permanent settlement. We have ended the detention of children for immigration purposes. We will create a dedicated Border Police Force, as part of the new National Crime Agency, to enhance national security, improve immigration controls and crack down on the trafficking of ...Download file to see next pages Read More
Share:
Tags
Cite this document
(“Immigration and Asylum Law Coursework Example | Topics and Well Written Essays - 3500 words”, n.d.)
Retrieved de https://studentshare.org/law/1396862-immigration-and-asylum-law

CHECK THESE SAMPLES OF Immigration and Asylum Law

In th...
8 Pages (2000 words) Case Study
sponsored ads
Save Your Time for More Important Things
Let us write or edit the coursework on your topic "Immigration and Asylum Law" with a personal 20% discount.
GRAB THE BEST PAPER

Let us find you another Coursework on topic Immigration and Asylum Law for FREE!