Comments (0)
Add to wishlistDelete from wishlist
Cite this document
Summary
Name Professor Course Date Introduction The reports main agenda is to lay out the legal requirements that enable market penetration of a business entity into the United States of America. The report also analyzes some of the basic legal points to consider before the establishment of such a company…
Download full paperFile format: .doc, available for editing
HIDE THIS PAPERGRAB THE BEST PAPER98.6% of users find it useful 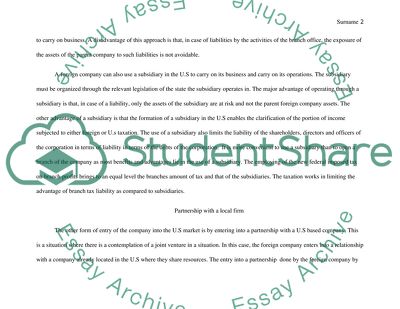 Download file to see previous pages This can be done through the name and address certification of the agent who is resident in the state. The company can also certify the name, address of the agent in the state, and acquire a certification of satisfactory standing from the concerned state or county where the business s set up. The advantage of using a branch is that there are no legal formalities associated with setting up a business and the only requirement is the qualifications to carry on business. A disadvantage of this approach is that, in case of liabilities by the activities of the branch office, the exposure of the assets of the parent company to such liabilities is not avoidable. A foreign company can also use a subsidiary in the U.S to carry on its business and carry on its operations. The subsidiary must be organized through the relevant legislation of the state the subsidiary operates in. The major advantage of operating through a subsidiary is that, in case of a liability, only the assets of the subsidiary are at risk and not the parent foreign company assets. The other advantage of a subsidiary is that the formation of a subsidiary in the U.S enables the clarification of the portion of income subjected to either foreign or U.s taxation. The use of a subsidiary also limits the liability of the shareholders, directors and officers of the corporation in terms of liability in terms of the debts of the corporation. It is more convenient to use a subsidiary than to open a branch of the company as most benefits and advantages lie in the use of a subsidiary. The employing of the new federal imposed tax on branch profits brings to an equal level the branches amount of tax and that of the subsidiaries. The taxation works in limiting the advantage of branch tax liability as compared to subsidiaries. Partnership with a local firm The other form of entry of the company into the U.S market is by entering into a partnership with a U.S based company. This is a situation where there is a contemplation of a joint venture in a situation. In this case, the foreign company enters into a relationship with a company already located in the U.S where they share resources. The entry into a partnership done by the foreign company by contributing capital with the US based company to a newly formed corporation in order to obtain a subsidiary. The other form of partnership is where the foreign company can enter into a general partnership with the U.S based company and carry on business in common. The partnership is subject to various legal and taxation rules as per the relevant state statutes. Procedure of forming an entity The formation and the running of a business enterprise in the United States require compliance of a number of various registration standards. The basic requirement is that the company must comply with the rules of the registration and regulating authorities. Employment issues Foreign companies and their subsidiaries doing business in the U.S should comply with the employment and labor laws of the United States. In some situations, the foreign parent companies become liable for omissions or actions of the subsidiary companies operating in the United States. The labor laws in the United States are more comprehensive and pose some technicality in operation especially if a foreign employer does not understand the laws. The dangers associated with non-compliance of these laws include ...Download file to see next pagesRead More
Share:
Tags
Cite this document
(“Business Law Essay Example | Topics and Well Written Essays - 2000 words - 1”, n.d.)
Retrieved from https://studentshare.org/law/1396761-business-law
(Business Law Essay Example | Topics and Well Written Essays - 2000 Words - 1)
https://studentshare.org/law/1396761-business-law.
“Business Law Essay Example | Topics and Well Written Essays - 2000 Words - 1”, n.d. https://studentshare.org/law/1396761-business-law.
Comments (0)
Click to create a comment or rate a document

CHECK THESE SAMPLES OF Business Law

The Census Bur...
6 Pages(1500 words)Assignment
sponsored ads
Save Your Time for More Important Things
Let us write or edit the essay on your topic "Business Law" with a personal 20% discount.
GRAB THE BEST PAPER

Let us find you another Essay on topic Business Law for FREE!