Comments (0)
Add to wishlistDelete from wishlist
Cite this document
Summary
This study now seeks to consider the thesis that the international human rights laws and provisions are not serving the general interests of justice. This paper shall discuss this thesis by reviewing instances of human rights violations and how the human rights laws have responded to these cases. …
Download full paperFile format: .doc, available for editing
HIDE THIS PAPERGRAB THE BEST PAPER93.7% of users find it useful 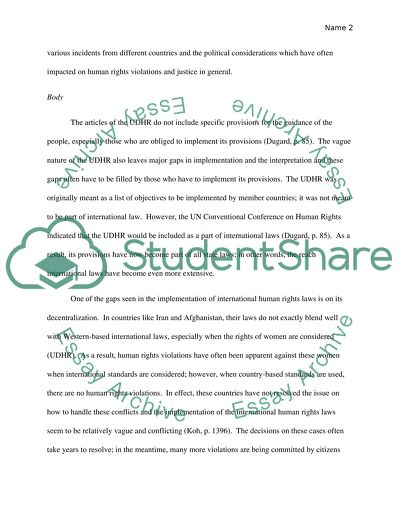 Download file to see previous pages The paper tells that international human rights are internationally recognized rights inherent and endowed to all human beings. As indicated in Article 2 of the Universal Declaration of Human Rights, all people are entitled to rights regardless of their “race, color, sex, language, religion, political, or other opinion or social origin, property or birth status”. Moreover, the endowment of such rights must not be based on the political, jurisdictional, or international status of the country where the citizen belongs. In effect, for countries and territories, the protection of international human rights must be consistent. Despite these clear provisions however, significant gaps in their implementation have been seen throughout the years. Human rights violations have been apparent in various countries and territories and the United Nations and other international governing bodies have not adequately addressed these issues. In other words, the delivery of justice has been questionable. The articles of the UDHR do not include specific provisions for the guidance of the people, especially those who are obliged to implement its provisions. The vague nature of the UDHR also leaves major gaps in implementation and the interpretation and these gaps often have to be filled by those who have to implement its provisions. The UDHR was originally meant as a list of objectives to be implemented by member countries; it was not meant to be part of international law. However, the UN Conventional Conference on Human Rights indicated that the UDHR would be included as a part of international laws. ...
One of the gaps seen in the implementation of international human rights laws is on its decentralization. In countries like Iran and Afghanistan, their laws do not exactly blend well with Western-based international laws, especially when the rights of women are considered (UDHR). As a result, human rights violations have often been apparent against these women when international standards are considered; however, when country-based standards are used, there are no human rights violations. In effect, these countries have not resolved the issue on how to handle these conflicts and the implementation of the international human rights laws seem to be relatively vague and conflicting (Koh, p. 1396). The decisions on these cases often take years to resolve; in the meantime, many more violations are being committed by citizens and government officials alike. This was clearly seen in the case of Afghanistan who was under the Taliban regime for many years until the US troops entered the country after the 9/11 attacks (Hancock, 2007). For years, Afghani men and women suffered under the repressive regime of the Taliban regime and their suffering did not gain sustained international attention; however, when America was attacked on September 11, 2001 and the Taliban proved to be a major supporter of the perpetrator of the attack, major attention was gained by the Taliban group and their actions in Afghanistan. This seems to indicate that the application of human rights practices is unbalanced and vague. Some of the issues in relation to international human rights and the promotion of justice also include the fact that the implementation of the UDHR is based on how vigilant the ...Download file to see next pagesRead More
Share:
Tags
Cite this document
(“Law, Justice, and Democracy: International Human Rights Essay”, n.d.)
Retrieved from https://studentshare.org/law/1396496-law-justice-and-democracy-international-human-rights

As a matter of fact, Hoffman’s statement that “international affairs is the nemesis of liberalism” has a grain of truth in it and this is especially so after the 9/11 incident.
There are two schools of thought or perspectives that are used to view international affairs: liberalism and realism. The study of these two perspectives is significant to the idea posed by Stanley Hoffman because they determine the reasons why international affairs, according to him, does not only see eye-to-eye with liberalism but seems to stand on the opposing side of it.
Liberalism can be defined as having four elements: citizens; the legislature; property rights, and; a market-driven economy (Dunne 186). Realism, on the othe...
6 Pages(1500 words)Assignment
sponsored ads
Save Your Time for More Important Things
Let us write or edit the essay on your topic "Law, Justice, and Democracy: International Human Rights" with a personal 20% discount.
GRAB THE BEST PAPER

Let us find you another Essay on topic Law, Justice, and Democracy: International Human Rights for FREE!