Comments (0)
Add to wishlistDelete from wishlist
Cite this document
Summary
The right to roam which is a statutory right in England and implies that no individual may make an absolute claim to private ownership of mountainous terrain or parts of the country. …
Download full paperFile format: .doc, available for editing
HIDE THIS PAPERGRAB THE BEST PAPER93.4% of users find it useful 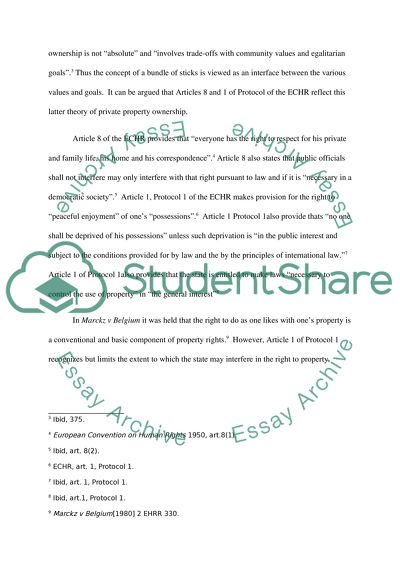 Extract of sample "The Right to Roam: Balancing Private Property and Public Access"

Download file to see previous pages Moreover, the exclusivity typically attending private ownership is protected by Article 1 of Protocol 1and Article 8 of the European Convention on Human Rights, 1950 which became a part of the law of England by virtue of the Human Rights Act 1998. However there are caveats to both provisions which are reflected in a number of statutes in England. This paper examines the juxtaposition between the exclusivity of private property claims facilitated by Articles 1 Protocol 1 and 8 of the ECHR and the social propriety of public access to private property via the statutory right to roam. An examination of the right to roam under English law demonstrates the extent to which the private claims are limited by public policy considerations. A further look at other sources of law in Europe permitting the right to roam exemplifies the pull of public policy considerations and the limits of Article 8 and Article 1, Protocol 1 of ECHR. Theories of Private Property and the ECHR It is generally argued that the owner has complete control over the res with the exclusive right to exclude all others.2 On the other hand it is argued, that private property ownership is not “absolute” and “involves trade-offs with community values and egalitarian goals”.3 Thus the concept of a bundle of sticks is viewed as an interface between the various values and goals. It can be argued that Articles 8 and 1 of Protocol of the ECHR reflect this latter theory of private property ownership. Article 8 of the ECHR provides that “everyone has the right to respect for his private and family life, his home and his correspondence”.4 Article 8 also states that public officials shall not interfere may only interfere with that right pursuant to law and if it is “necessary in a democratic society”.5 Article 1, Protocol 1 of the ECHR makes provision for the right to “peaceful enjoyment” of one’s “possessions”.6 Article 1 Protocol 1also provide thats “no one shall be deprived of his possessions” unless such deprivation is “in the public interest and subject to the conditions provided for by law and the by the principles of international law.”7 Article 1 of Protocol 1also provides that the state is entitled to make laws “necessary to control the use of property” in “the general interest”8 In Marckz v Belgium it was held that the right to do as one likes with one’s property is a conventional and basic component of property rights.9 However, Article 1 of Protocol 1 recognizes but limits the extent to which the state may interfere in the right to property. Interference must not be arbitrary and although Article 1 of Protocol 1 does not speak to compensation, when the state does interfere in property rights, there must be compensation.10 Compensation is only necessary in instances where interference in the property amounts to taking the property and even then, full compensation is not altogether guaranteed.11 For instance in Baner v Sweden, admitting the public access to private waters for fishing activities did not amount to deprivation of the right to peaceful enjoyment of one’s possessions.12 Thus Article 1, Protocol 1 of ECHR conveys upon the state a broad authority relative to the determination of the public interest in issue.13 It was ruled in Neimetz v Germany that the primary purpose of Article 8 is to ensure that individuals are protected against public officials’ arbitrary interference.14 First is must first be determined whether or not interference is justified by virtue of Article 8(2). In ascertaining whether or not in ...Download file to see next pagesRead More
Share:
Tags
Cite this document
(“The Right to Roam: Balancing Private Property and Public Access Essay”, n.d.)
Retrieved from https://studentshare.org/law/1396263-access-to-land-assignment
(The Right to Roam: Balancing Private Property and Public Access Essay)
https://studentshare.org/law/1396263-access-to-land-assignment.
“The Right to Roam: Balancing Private Property and Public Access Essay”, n.d. https://studentshare.org/law/1396263-access-to-land-assignment.
Comments (0)
Click to create a comment or rate a document

CHECK THESE SAMPLES OF The Right to Roam: Balancing Private Property and Public Access

Angelica (2004), on the contrary, says that nonprofit organizations are financially dependent on government grants and contributions from individuals and corporations. Through collaboration, nonprofit organizations are now becoming more business-like. Although they have the status of nonprofit that provides the most services at the least possible price (Shim & Siegel, 1997), they operate in a business-like manner as said by Nadder. But they still have some distinction from the for-profit ente...
13 Pages(3250 words)Literature review

On the other hand, the subjects in cohort studies are selected on the basis of whether they have a certain risk factor/exposure or not and are then followed over time to observe for the development of the outcome/disease (Mann, 2003). Cohort studies can either be prospective or retrospective and can be used to calculate the incidence of a disease and the relative risk of developing a disease.
As compared to observational studies, such as case-control and cohort studies, in interventional studies such as a randomised control trial, the investigator assigns the exposure. In other words, the investigators introduce an intervention and the study objective is to determine the effect of that intervention on the study population. Such...
7 Pages(1750 words)Assignment
sponsored ads
Save Your Time for More Important Things
Let us write or edit the essay on your topic "The Right to Roam: Balancing Private Property and Public Access" with a personal 20% discount.
GRAB THE BEST PAPER

Let us find you another Essay on topic The Right to Roam: Balancing Private Property and Public Access for FREE!