Comments (0)
Add to wishlist Delete from wishlist
Cite this document
Summary
Company Law – Problem Question- Analysis Issue 1 Michael, Kevin and James are the directors of the Standard Constructions Ltd. They took a decision to purchase a piece of land for ?500,000 that is to be used for a building development. Despite the fact that the land having an enclosure on its three-sides by present developments but on the fourth side , there are two separate two-meter strip of land runs parallel to the land in the fourth side , and this prevents access to the road, and makes development impossible…
Download full paper File format: .doc, available for editing
HIDE THIS PAPERGRAB THE BEST PAPER97.9% of users find it useful 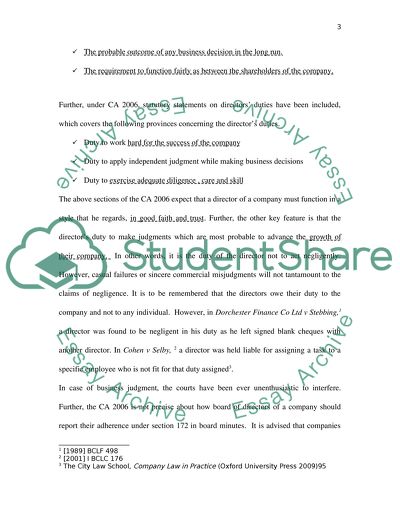 Download file to see previous pages On the footing of equitable principles and on some common rules, these general duties have been imposed on a director, and director has to act in accordance with the same without showing any negligence while performing his duty as a director of a company. The general duties will be construed and extended in the same way as under equity principles and under common law rules and due weight will be given to the appropriate equitable rules and common law rules in construing and applying the general duties. As per section 172(1) , a director of a company must function in the style he regards , in good trust , which is most probably to enhance the growth of the company for the advantages of its shareholders in its entirety, and in exercising so, should give due consideration to the following: The probable outcome of any business decision in the long run. The requirement to function fairly as between the shareholders of the company. Further, under CA 2006, statutory statements on directors’ duties have been included, which covers the following provinces concerning the director’s duties. ...
In other words, it is the duty of the director not to act negligently. However, casual failures or sincere commercial misjudgments will not tantamount to the claims of negligence. It is to be remembered that the directors owe their duty to the company and not to any individual. However, in Dorchester Finance Co Ltd v Stebbing,1 a director was found to be negligent in his duty as he left signed blank cheques with another director. In Cohen v Selby, 2 a director was held liable for assigning a task to a specific employee who is not fit for that duty assigned3. In case of business judgment, the courts have been ever unenthusiastic to interfere. Further, the CA 2006 is not precise about how board of directors of a company should report their adherence under section 172 in board minutes. It is advised that companies may find it secure to add a reference to the fact that the directors have adhered to the decision making provisions as demanded in section 172 in their board minutes to escape any charges of negligence later. 172 of CA 2006 demands that a director should function bona fide in a manner that would kindle the success of the company for the advantage of its member in their entirety. In Rgentcrest Plc (in liq) v Cohen , it was held that the directors should act in what they think and should not act in what the court may think, and it should be for advantage of the whole of its members4. The section 173 requires the director of a company to use his independent judgment while making business decisions. This section facilitates the director to take an opinion from experts or in certain case, if a director fails to take proper advice from an expert will be regarded as an infringement of their fiduciary duty. However, ...Download file to see next pages Read More
Share:
Tags
Cite this document
(“Company Law Essay Example | Topics and Well Written Essays - 2500 words”, n.d.)
Retrieved from https://studentshare.org/law/1395728-company-law