Comments (1)
Add to wishlist Delete from wishlist
Cite this document
Summary
Directors are fiduciaries and consent or agree to act on behalf of or for, or in the best interests of the corporation in which they have been appointed as directors. Directors are required to exercise their duties primarily to maximize the shareholder’s welfare. …
Download full paper File format: .doc, available for editing
HIDE THIS PAPERGRAB THE BEST PAPER95% of users find it useful 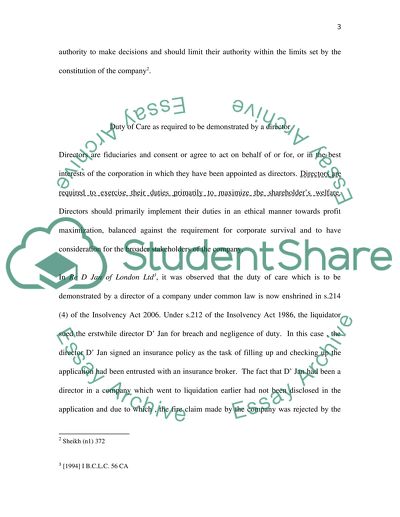 Download file to see previous pages Directors should primarily implement their duties in an ethical manner towards profit maximization, balanced against the requirement for corporate survival and to have consideration for the broader stakeholders of the company.
In Re D Jan of London Ltd , it was observed that the duty of care which is to be demonstrated by a director of a company under common law is now enshrined in s.214 (4) of the Insolvency Act 2006. Under s.212 of the Insolvency Act 1986, the liquidator sued the erstwhile director D’ Jan for breach and negligence of duty. In this case , the director D’ Jan signed an insurance policy as the task of filling up and checking up the application had been entrusted with an insurance broker. The fact that D’ Jan had been a director in a company which went to liquidation earlier had not been disclosed in the application and due to which , the fire claim made by the company was rejected by the insurance company. In this case , Hoffmann L J found D’ Jan in breach of his duty of care as he failed to go through the filled-in form and hence , he acted negligently .
In Bairstow v Queens Moat House Plc , Nelson J found the four erstwhile directors of the defendant company liable for over £26 million as regards to earlier dividends authorised by them. Nelson J observed the following in this case;
A director who had given his permission for the defrayment of illegal dividend in violation of his duty and as a quasi trustee , he would be accountable to return such unlawful dividends paid back to the company as he knew that the dividends so paid were not legally authorised whether or not that authentic knowledge tantamount to fraud; If he is already aware of the information about the improperness of such dividend payments despite the fact that he was not aware that such improperness made the payment illegal. If he ought to have taken in all the background to have familiarity to the whole of the background which made the payments not legal; If he ought to have been well-known, as diligent and logically capable director that dividend payments were not legal6. In Overend and Gurney Co v Gibb and Gibb7, in exercise of the power authorised under the company’s Memorandum and Articles of Association of the company, the directors decided to purchase a money dealing and bill broking business. Later, this investment was found to be disastrous for the company. House of Lords were of the opinion though the directors ...Download file to see next pages Read More
Share:
Tags
Cite this document
(“Uk Company Law Directors Duties Essay Example | Topics and Well Written Essays - 2500 words”, n.d.)
Retrieved from https://studentshare.org/law/1395727-uk-company-law-directors-duties

ri
richmond92 added comment 1 year ago
Student rated this paper as
The topic of "Uk Company Law Directors Duties." is quite often seen among the assignments in university. Still, this paper opens a brand new perspective of seeing the problem. I’ll use the idea for my own document.

In th...
8 Pages (2000 words) Case Study
sponsored ads
Save Your Time for More Important Things
Let us write or edit the essay on your topic "Uk Company Law Directors Duties" with a personal 20% discount.
GRAB THE BEST PAPER

Let us find you another Essay on topic Uk Company Law Directors Duties for FREE!