Comments (1)
Add to wishlistDelete from wishlist
Cite this document
Summary
This research aims to evaluate and present an analysis of directives and regulations. Regulations and directives are important for legislating in the European Union (EU). Regulations are binding upon member nations. Directives are principles which are also binding. …
Download full paperFile format: .doc, available for editing
HIDE THIS PAPERGRAB THE BEST PAPER93.9% of users find it useful 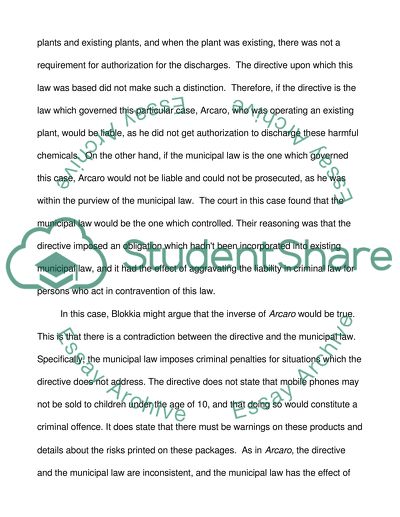 Download file to see previous pages The paper tells that the directives are outcome based, which means that the member states may implement the directive in the manner in which they choose, but they must implement regulations and laws which achieve the objectives of the directive. Directives are principle based because every nation has sovereignty, therefore they need to be free to implement their own laws, yet there must also be harmony in the international system. Therefore, by issuing principles to the member states in the EU, not rules to implement, directives accomplish the needed goal of harmonizing Union law while acknowledging the freedom that member states enjoy in implementing their own laws. In this case, there is a conflict between the directive set forth and the municipal law that the UK adopted to implement the directive. Specifically, the UK law is more draconian than the directive. A case which would helpful to Blokkia in this regard is that of Luciano Arcaro Case C-168/95. In this case, Luciano Arcaro was accused of discharging dangerous chemicals into water. In this case, the municipal law stated that there was a distinction between new plants and existing plants, and when the plant was existing, there was not a requirement for authorization for the discharges. The directive upon which this law was based did not make such a distinction. Therefore, if the directive is the law which governed this particular case, Arcaro, who was operating an existing plant, would be liable, as he did not get authorization to discharge these harmful chemicals. On the other hand, if the municipal law is the one which governed this case, Arcaro would not be liable and could not be prosecuted, as he was within the purview of the municipal law. The court in this case found that the municipal law would be the one which controlled. Their reasoning was that the directive imposed an obligation which hadn't been incorporated into existing municipal law, and it had the effect of aggravating the liability in criminal law for persons who act in contravention of this law. In this case, Blokkia might argue that the inverse of Arcaro would be true. This is that there is a contradiction between the directive and the municipal law. Specifically, the municipal law imposes criminal penalties for situations which the directive does not address. The directive does not state that mobile phones may not be sold to children under the age of 10, and that doing so would constitute a criminal offence. It does state that there must be warnings on these products and details about the risks printed on these packages. As in Arcaro, the directive and the municipal law are inconsistent, and the municipal law has the effect of aggravating the directive law. Blokkia is within the purview of the directive law, assuming that they did label the product and included the information that the directive requires, so it may state that, since the municipal law aggravates the directive, that the directive is the law which should govern, by using the logic of the Arcaro court. In the case of Federal Republic of Germany v. European Parliament and Council of the European Union Cas C-380/03, there is further instruction upon which Blokkia might rely. Specifically, this case concerned a directive which prohibited the advertising and sponsorship of tobacco products by the printed media and radio broadcasts. This case stated that there were disparities which existed between the individual Member States' national laws, and that these disparities were such that the free movement of goods and the freedom to provide services were implicated. This court notes that if there are disparities between the member states in implementing this directive's principles, such that it has a direct effect on the ...Download file to see next pagesRead More
Share:
Tags
Cite this document
(“European Law Assignment Example | Topics and Well Written Essays - 2500 words”, n.d.)
Retrieved from https://studentshare.org/law/1394884-european-law
(European Law Assignment Example | Topics and Well Written Essays - 2500 Words)
https://studentshare.org/law/1394884-european-law.
“European Law Assignment Example | Topics and Well Written Essays - 2500 Words”, n.d. https://studentshare.org/law/1394884-european-law.
Comments (1)
Click to create a comment or rate a document

mo
mokon added comment 1 year ago
Student rated this paper as
The topic of "European Law" was tough to find. I spent hours to find it. Here at StudentShare, I got the finest example. Many thanks!

CHECK THESE SAMPLES OF European Law

In th...
8 Pages(2000 words)Case Study
sponsored ads
Save Your Time for More Important Things
Let us write or edit the assignment on your topic "European Law" with a personal 20% discount.
GRAB THE BEST PAPER

Let us find you another Assignment on topic European Law for FREE!