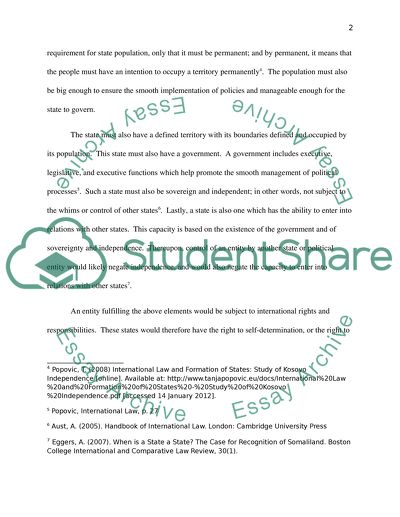 Download file to see previous pages The paper throws light on international laws, the laws which govern the relations of states and the global community in general. Fiore discusses that the goal of international law is to evaluate and establish international rights and duties which must be fulfilled by all members of the international community. Its goal is also to establish the legal rules which are applicable to these rights and duties and the legal remedies available to ensure compliance. For this reason, it is therefore important to establish first which the subjects and persons who are to enjoy and lay claim to these rights and duties. There are various subjects and objects of international law, and the most common of these are the states. A state, as defined by Article 1 of Montevideo Convention on the Rights and Duties of States, is an entity possessing of the four elements: permanent population, defined territory, government, and the capacity to enter into relations with other states. In order for a state to be considered as such – and therefore entitled to the rights and burdened with the responsibilities of international law – it must fulfil these requirements of statehood. The first element of statehood is a permanent population. There is no actual minimum numerical requirement for state population, only that it must be permanent; and by permanent, it means that the people must have an intention to occupy a territory permanently. The population must also be big enough to ensure the smooth implementation of policies and manageable enough for the state to govern. The state must also have a defined territory with its boundaries defined and occupied by its population. This state must also have a government. A government includes executive, legislative, and executive functions which help promote the smooth management of political processes5. Such a state must also be sovereign and independent; in other words, not subject to the whims or control of other states6. Lastly, a state is also one which has the ability to enter into relations with other states. This capacity is based on the existence of the government and of sovereignty and independence. Thereupon, control of an entity by another state or political entity would likely negate independence, and would also negate the capacity to enter into relations with other states7. An entity fulfilling the above elements would be subject to international rights and responsibilities. These states would therefore have the right to self-determination, or the right to be free of any territorial changes which would be against their political mandates8. It also refers to the right to be free of interference in their political and economic activities. This right is based on prohibitions imposed as a means of establishing distance from the practice of colonialism and imperialism which used to dominate human history. A state is therefore subject to various rights and responsibilities. In general, a state would have the competence to carry out acts in the international arena, enter into and make treaties, as well as similar agreements9. These states are also “exclusively competent with respect to their internal affairs-“exclusive” means plenary and not subject to control by other States”10. Crawford also discusses that states cannot be subjected to international processes and activities without their express consent11. They are also considered as entities which stand on equal ground12. These rights and responsibilities govern international relations and violations of these responsibilities would make a state liable and subject to international laws and policies. Non-state entities, like Kosovo, Somalia, and Taiwan, do not enjoy these same rights and are not dealt with as states. For example Taiwan cannot enter into a treaty with another state, ...Download file to see next pages Read More
Share:
Tags
Cite this document
(“Public International Law Coursework Example | Topics and Well Written Essays - 1750 words”, n.d.)
Retrieved from https://studentshare.org/law/1394512-public-international-law

As a matter of fact, Hoffman’s statement that “international affairs is the nemesis of liberalism” has a grain of truth in it and this is especially so after the 9/11 incident.
There are two schools of thought or perspectives that are used to view international affairs: liberalism and realism. The study of these two perspectives is significant to the idea posed by Stanley Hoffman because they determine the reasons why international affairs, according to him, does not only see eye-to-eye with liberalism but seems to stand on the opposing side of it.
Liberalism can be defined as having four elements: citizens; the legislature; property rights, and; a market-driven economy (Dunne 186). Realism, on the othe...
6 Pages (1500 words) Assignment
sponsored ads
Save Your Time for More Important Things
Let us write or edit the coursework on your topic "Public International Law" with a personal 20% discount.
GRAB THE BEST PAPER

Let us find you another Coursework on topic Public International Law for FREE!