Comments (0)
Add to wishlistDelete from wishlist
Cite this document
Summary
Name Task Tutor Date Application of Law Affidavit Criminal activities are increasing around the globe. These activities pose great danger to the well being of loyal citizens more so, leading to massive death in most countries in the world. Recently, one suspect Doe was arrested and remanded for planning to use dangerous weapons such as grenades to cause havoc in a shopping mall in rock II which is about ninety miles from Chicago…
Download full paperFile format: .doc, available for editing
HIDE THIS PAPERGRAB THE BEST PAPER96.6% of users find it useful 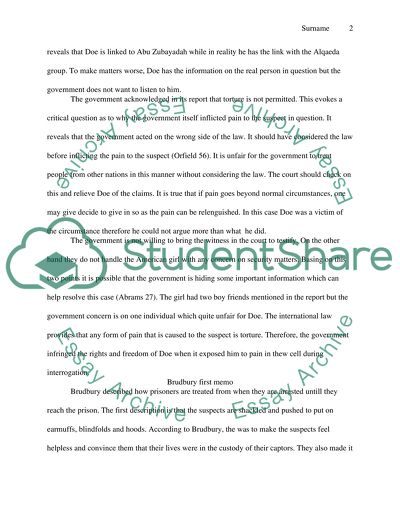 Extract of sample "Application of Law"

Download file to see previous pages This urges the government to induce some pain or some sort of punishment to the suspect so as he or she can reveal the hidden information. According to Bybee enhanced interrogative techniques, a suspect can only be induced to pain if he or she is a threat to the person in charge of him. Due to the increasing suicides and criminal activities, the government would like to continue with the enhanced interrogation techniques (Orfield 45). The reason is that there is a need to get full information from the suspects to enable the government to eradicate such behaviors in the community. A country is supposed to defend its citizens. To achieve this, the constitution provides under section 2340A that the enhanced interrogative techniques must be used. Memorandum According to the report provided in this honorable court, it is obvious that the government is trying to implicate a wrong person. It is because the government information reveals that Doe is linked to Abu Zubayadah while in reality he has the link with the Alqaeda group. To make matters worse, Doe has the information on the real person in question but the government does not want to listen to him. The government acknowledged in its report that torture is not permitted. This evokes a critical question as to why the government itself inflicted pain to the suspect in question. It reveals that the government acted on the wrong side of the law. It should have considered the law before inflicting the pain to the suspect (Orfield 56). It is unfair for the government to treat people from other nations in this manner without considering the law. The court should check on this and relieve Doe of the claims. It is true that if pain goes beyond normal circumstances, one may give decide to give in so as the pain can be relenguished. In this case Doe was a victim of the circumstance therefore he could not argue more than what he did. The government is not willing to bring the witness in the court to testify. On the other hand they do not handle the American girl with any concern on security matters. Basing on this two points it is possible that the government is hiding some important information which can help resolve this case (Abrams 27). The girl had two boy friends mentioned in the report but the government concern is on one individual which quite unfair for Doe. The international law provides that any form of pain that is caused to the suspect is torture. Therefore, the government infringed the rights and freedom of Doe when it exposed him to pain in thew cell during interrogation. Brudbury first memo Brudbury described how prisoners are treated from when they are arrested untill they reach the prison. The first description is that the suspects are shackled and pushed to put on earmuffs, blindfolds and hoods. According to Brudbury, the was to make the suspects feel helpless and convince them that their lives were in the custody of their captors. They also made it clear to the suspects that they did not have any power to effect their condition. After reaching the prison he notes that the suspects were stripped before carrying out any interviews. The suspects were crossexamined both psychologically and medically to ensure that there are no any contradiction in the interrogative methods. One thing with the ...Download file to see next pagesRead More
Share:
Tags
Cite this document
(“Application of Law Term Paper Example | Topics and Well Written Essays - 1750 words”, n.d.)
Retrieved from https://studentshare.org/law/1394133-law
(Application of Law Term Paper Example | Topics and Well Written Essays - 1750 Words)
https://studentshare.org/law/1394133-law.
“Application of Law Term Paper Example | Topics and Well Written Essays - 1750 Words”, n.d. https://studentshare.org/law/1394133-law.
Comments (0)
Click to create a comment or rate a document

CHECK THESE SAMPLES OF Application of Law

In th...
8 Pages(2000 words)Case Study
sponsored ads
Save Your Time for More Important Things
Let us write or edit the term paper on your topic "Application of Law" with a personal 20% discount.
GRAB THE BEST PAPER

Let us find you another Term Paper on topic Application of Law for FREE!