Comments (1)
Add to wishlist Delete from wishlist
Cite this document
Summary
This essay demonstrates that the main question for Contemporary Caravans Ltd with respect to Nathan Noble, Ideal Homes and Homeward Abound is whether or not offer and acceptance was complete to such an extent that valid and binding contracts were formed…
Download full paper File format: .doc, available for editing
HIDE THIS PAPERGRAB THE BEST PAPER97.6% of users find it useful 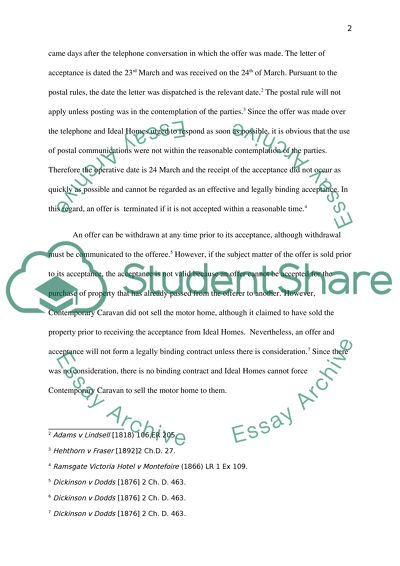 Extract of sample "Law of Obligations"

an
antoinettekilba added comment 1 year ago
Student rated this paper as
This essay was always my weak point. I could never finish it successfully. Still, after I found this precise essay, I understood how it should be completed. So, I performed my research afterward and completed the essay in several hours, instead of days as it was previously.

CHECK THESE SAMPLES OF Law of Obligations

In th...
8 Pages (2000 words) Case Study
sponsored ads
Save Your Time for More Important Things
Let us write or edit the essay on your topic "Law of Obligations" with a personal 20% discount.
GRAB THE BEST PAPER

Let us find you another Essay on topic Law of Obligations for FREE!