Comments (0)
Add to wishlistDelete from wishlist
Cite this document
Summary
The paper will apply contract law to legally advice Arju on the best way to solve her current legal crisis. Arguments will be given on how Arju can defend litigations presented in court and the counter arguments that Arju may encounter. …
Download full paperFile format: .doc, available for editing
HIDE THIS PAPERGRAB THE BEST PAPER94.9% of users find it useful 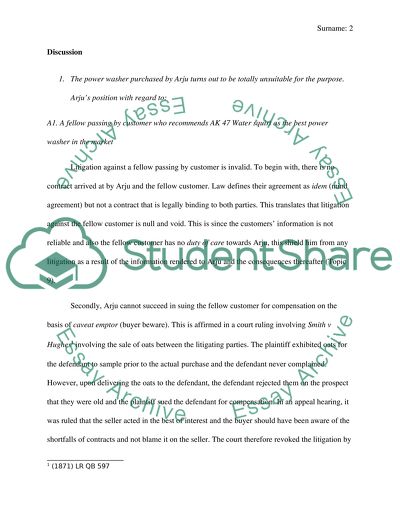 Download file to see previous pages The paper defines a contract as an agreement between two parties or corporations that creates legally binding obligations and rights as pertains to the concerned entities. Contracts form the bulwark of communication, understanding and conducting business between two entities: individuals, or Business Corporation. Parties to a contract need to be very sure of the requirements of the contract and their stake in the endeavor, otherwise, they stand to lose financially extensively. This therefore means that for a contract to be sound: it has to involve two parties, there has to have been an agreement reached by the two parties and the contract must create legally binding rights and obligations. Litigation against a fellow passing by customer is invalid. To begin with, there is no contract arrived at by Arju and the fellow customer. Law defines their agreement as idem (mind agreement) but not a contract that is legally binding to both parties. This translates that litigation against the fellow customer is null and void. This is since the customers’ information is not reliable and also the fellow customer has no duty of care towards Arju, this shield him from any litigation as a result of the information rendered to Arju and the consequences thereafter.Secondly, Arju cannot succeed in suing the fellow customer for compensation on the basis of caveat emptor (buyer beware). This is affirmed in a court ruling involving Smith v Hughes involving the sale of oats between the litigating parties. The plaintiff exhibited oats for the defendant to sample prior to the actual purchase and the defendant never complained. However, upon delivering the oats to the defendant, the defendant rejected them on the prospect that they were old and the plaintiff sued the defendant for compensation. In an appeal hearing, it was ruled that the seller acted in the best of interest and the buyer should have been aware of the shortfalls of contracts and not blame it on the seller. The court therefore revoked the litigation by the buyer. On this basis, by the fellow customer merely suggesting that Arju purchases the AK 47 water squirt as the ideal power washer, the liability for its non performance did not befall him. Arju should have been more careful and have adequate information on the best power washer and also be aware of the shortcomings of the power washer he was compelled to buy. It is evident that litigation against the fellow customer by Arju would not be successful2. A2. A sales assistant from the home decorating department who assures Arju that the store sells quality equipment, yet he has received over 200 faulty equipments in the past four hours Arju would successfully file litigation against the home decorating department assistant on the basis of misrepresentation. This is since the misrepresentation by the home decorating assistant has the four qualifications for a successful compensation to Arju as will be outlined. To begin with, the misrepresentation was a statement. This statement is classified as a half truth as held by Lord Justice James in Arkwright v Newbold3 where he asserted that even if everything previously said is true but some information id left out, it qualifies to a false statement and consequently to misrepresentation. Even where the participants in the negotiations have no direct relationship with each other, ...Download file to see next pagesRead More
Share:
Tags
Cite this document
(“Contract law Coursework Example | Topics and Well Written Essays - 3750 words”, n.d.)
Retrieved from https://studentshare.org/law/1394001-contract-law
(Contract Law Coursework Example | Topics and Well Written Essays - 3750 Words)
https://studentshare.org/law/1394001-contract-law.
“Contract Law Coursework Example | Topics and Well Written Essays - 3750 Words”, n.d. https://studentshare.org/law/1394001-contract-law.
Comments (0)
Click to create a comment or rate a document

In th...
8 Pages(2000 words)Case Study
sponsored ads
Save Your Time for More Important Things
Let us write or edit the coursework on your topic "Contract law" with a personal 20% discount.
GRAB THE BEST PAPER

Let us find you another Coursework on topic Contract law for FREE!