Comments (0)
Add to wishlistDelete from wishlist
Cite this document
Summary
The objective of this research is to acquire a better insight of the development of the mechanisms of enforcement of EU law. The research will attempt to address the primary question framed as follows: Are the mechanisms of enforcement of EU law satisfactory?…
Download full paperFile format: .doc, available for editing
HIDE THIS PAPERGRAB THE BEST PAPER95.6% of users find it useful 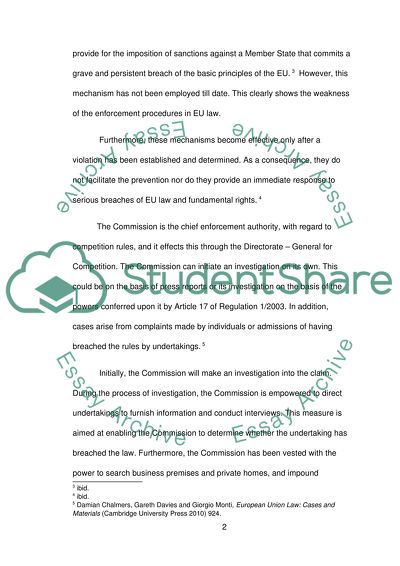 Download file to see previous pages The paper tells that the Commission is the chief enforcement authority, with regard to competition rules, and it effects this through the Directorate – General for Competition. The Commission can initiate an investigation on its own. This could be on the basis of press reports or its investigation on the basis of the powers conferred upon it by Article 17 of Regulation 1/2003. In addition, cases arise from complaints made by individuals or admissions of having breached the rules by undertakings. Initially, the Commission will make an investigation into the claim. During the process of investigation, the Commission is empowered to direct undertakings to furnish information and conduct interviews. This measure is aimed at enabling the Commission to determine whether the undertaking has breached the law. Furthermore, the Commission has been vested with the power to search business premises and private homes, and impound pertinent documents. However, before making a search, the Commission has to take the permission of the national Court. Specifically, the Commission is empowered by Article 18(1) of the Regulation 1/2003 to instruct undertakings to provide information related to the infringement in question. A recent development is that the Commission relies on the statements made to it by parties. While providing information to the Commission, an undertaking runs the risk of incriminating itself. This violates the right against self – incrimination and the ECJ has accorded partial recognition to this right. Thus, this right applies to a party that has to reply under pain of fine. In case there is no fine involved, there is no such right, as the party is at liberty to ignore the direction of the Commission.8 Even if there is the possibility of a fine being imposed for remaining silent, the right is limited in extent. This was amply illustrated in the case Orkem v Commission.9 The Commission has the authority to decide whether a particular piece of information is essential for establishing breach of competition rules. As a consequence, even if it has proof regarding such infringement, it can nevertheless, request for additional information.10 Such additional information could be necessary for describing the infringement in a better manner.. As such, with regard to infringements in the economic area, it cannot be assumed that an undertaking is entitled to withhold ...Download file to see next pagesRead More
Share:
Tags
Cite this document
(“EU Law Enforcement Mechanisms Essay Example | Topics and Well Written Essays - 2500 words”, n.d.)
Retrieved from https://studentshare.org/law/1393989-eu-law-enforcement-mechanisms
(EU Law Enforcement Mechanisms Essay Example | Topics and Well Written Essays - 2500 Words)
https://studentshare.org/law/1393989-eu-law-enforcement-mechanisms.
“EU Law Enforcement Mechanisms Essay Example | Topics and Well Written Essays - 2500 Words”, n.d. https://studentshare.org/law/1393989-eu-law-enforcement-mechanisms.
Comments (0)
Click to create a comment or rate a document

In th...
8 Pages(2000 words)Case Study
sponsored ads
Save Your Time for More Important Things
Let us write or edit the essay on your topic "EU Law Enforcement Mechanisms" with a personal 20% discount.
GRAB THE BEST PAPER

Let us find you another Essay on topic EU Law Enforcement Mechanisms for FREE!