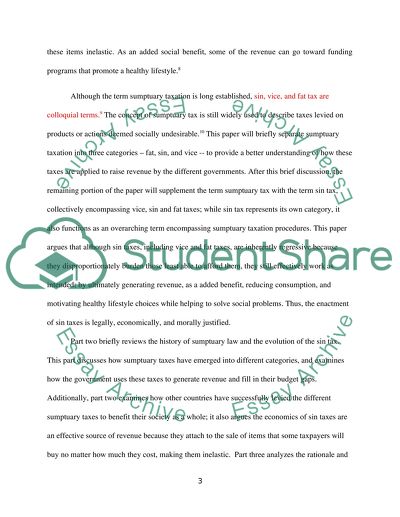 Download file to see previous pages 2 In 2010, the government increased its revenue by over $75 billion through sumptuary taxes. 3 As a result, sumptuary taxation is quickly becoming the tax of choice among federal and state authorities and has even gained approval from many taxpayers. Its popularity appears due not only to its money-making abilities but also to its dual purpose.4 First, it is an efficient way for the government to collect revenue from taxpayers for something they can and probably should live without.5 Second, unlike other taxes, sumptuary taxes are often enacted with the additional aim of reducing or eliminating the public’s consumption of a particular product.6 Although economists doubt that sumptuary taxes will greatly affect the behavior of most individuals, especially because the amounts tacked on are quite small, these taxes are an effective source of revenue.7 Because they attach to the sale of items that some taxpayers will buy no matter how much they cost they make the supply and revenue stream of these items inelastic. As an added social benefit, some of the revenue can go toward funding programs that promote a healthy lifestyle.8 Although the term sumptuary taxation is long established, sin, vice, and fat tax are colloquial terms.9 The concept of sumptuary tax is still widely used to describe taxes levied on products or actions deemed socially undesirable.10 This paper will briefly separate sumptuary taxation into three categories – fat, sin, and vice -- to provide a better understanding of how these taxes are applied to raise revenue by the different governments. After this brief discussion, the remaining portion of the paper will supplement the term sumptuary tax with the term sin tax, collectively encompassing vice, sin and fat taxes; while sin tax represents its own category, it also functions as an overarching term encompassing sumptuary taxation procedures. This paper argues that although sin taxes, including vice and fat taxes, are inherently regressive because they disproportionately burden those least able to afford them, they still effectively work as intended; by ultimately generating revenue, as a added benefit, reducing consumption, and motivating healthy lifestyle choices while helping to solve social problems. Thus, the enactment of sin taxes is legally, economically, and morally justified. Part two briefly reviews the history of sumptuary law and the evolution of the sin tax. This part discusses how sumptuary taxes have emerged into different categories, and examines how the government uses these taxes to generate revenue and fill in their budget gaps. Additionally, part two examines how other countries have successfully levied the different sumptuary taxes to benefit their society as a whole; it also argues the economics of sin taxes are an effective source of revenue because they attach to the sale of items that some taxpayers will buy no matter how much they cost, making them inelastic. Part three analyzes the rationale and public policy in support of sin taxes, and raises counterarguments. Additionally, part three addresses the conflict of interest created by a state’s dependence on sin tax revenues and briefly examines a resolution, i.e., earmarking, to mitigate the conflict. Lastly, this paper concludes with how sin taxes are important and why they will benefit society as a whole. There is sound tax policy in implementing sin ...Download file to see next pages Read More
Share:
Tags
Cite this document
(“A seminar/law paper that is on vice/sin taxes and how the government Essay”, n.d.)
Retrieved from https://studentshare.org/law/1393870-a-seminar-law-paper-that-is-on-vice-sin-taxes-and

“A seminar/law Paper That Is on vice/Sin Taxes and How the Government Essay”, n.d. https://studentshare.org/law/1393870-a-seminar-law-paper-that-is-on-vice-sin-taxes-and.
Comments (1)
Click to create a comment or rate a document

wi
wilbertfritsch added comment 2 years ago
Student rated this paper as
Great work done on the %topic%. I think it is the best essay I have seen so far.

In th...
8 Pages (2000 words) Case Study
sponsored ads
Save Your Time for More Important Things
Let us write or edit the essay on your topic "A seminar/law paper that is on vice/sin taxes and how the government apply/use them" with a personal 20% discount.
GRAB THE BEST PAPER

Let us find you another Essay on topic A seminar/law paper that is on vice/sin taxes and how the government apply/use them for FREE!