Comments (0)
Add to wishlistDelete from wishlist
Cite this document
Summary
Name: Tutor: Course: Date: University: Question 1 According to the law of contract, contract has to have various elements for it to satisfy its being recognised as a contract. Therefore, a contract that is legally binding has to have such elements as; Offer An offer refers to that expression, by a person, of willingness to involve in a contract and this is coupled with particular terms to be upheld and these are by the offeror…
Download full paperFile format: .doc, available for editing
HIDE THIS PAPERGRAB THE BEST PAPER92.1% of users find it useful 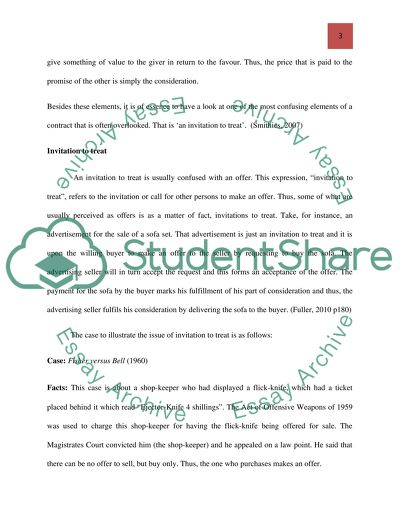 Extract of sample "Contracts in Business"

Download file to see previous pages Consideration Either of the parties involved in a contract has to receive something valuable for the contract to be sealed. Therefore, in a situation where one promises a friend to give him a car and the giver refuses to eventually give the car to the friend, such a friend cannot go to court and sue him/her for not giving him that car. This is due to the fact that, the receiver of the car was not to give something of value to the giver in return to the favour. Thus, the price that is paid to the promise of the other is simply the consideration. Besides these elements, it is of essence to have a look at one of the most confusing elements of a contract that is often overlooked. That is ‘an invitation to treat’. (Smithies, 2007) Invitation to treat An invitation to treat is usually confused with an offer. This expression, “invitation to treat”, refers to the invitation or call for other persons to make an offer. Thus, some of what are usually perceived as offers is as a matter of fact, invitations to treat. Take, for instance, an advertisement for the sale of a sofa set. That advertisement is just an invitation to treat and it is upon the willing buyer to make an offer to the seller by requesting to buy the sofa. The advertising seller will in turn accept the request and this forms an acceptance of the offer. The payment for the sofa by the buyer marks his fulfillment of his part of consideration and thus, the advertising seller fulfils his consideration by delivering the sofa to the buyer. (Fuller, 2010 p180) The case to illustrate the issue of invitation to treat is as follows: Case: Fisher versus Bell (1960) Facts: This case is about a shop-keeper who had displayed a flick-knife, which had a ticket placed behind it which read “Ejector-Knife 4 shillings”. The Act of Offensive Weapons of 1959 was used to charge this shop-keeper for having the flick-knife being offered for sale. The Magistrates Court convicted him (the shop-keeper) and he appealed on a law point. He said that there can be no offer to sell, but buy only. Thus, the one who purchases makes an offer. Held: This was an invitation to treat (the display of the flick-knife for sale) and following this the Act was amended to read to say that it is an offence for a person to be found in possession or expresses intent to sell a flick-knife. (Blond and Petrillo, 2007 p208) The case provided involves HE Ltd which posted (on September 10th) an offer to dispose 10 laptop computers to GCS. The offer for sale included a price tag of ?300/Laptop and was open until September 24th. This offer for sale, as per the facts obtained from the aforementioned elements of a contract, is just an invitation to treat. GCS’s manager, Gemma called HE Ltd for an enquiry whether they would accept a 2-month credit and that signifies an offer to buy. On September 20th Bertie, HE’s manager refused to sell the laptops since the terms of sale stated otherwise and this signifies a refusal to make an acceptance to GCS’s offer. The sale of the same laptops to Argon Electronics on September 22nd shows a complete contract. Therefore, the September 23rd offer to buy by Gemma would not be valid since the contract had already been carried out. Thus, no contract had existed before between HE Ltd and GCS. Question 2 To: ...Download file to see next pagesRead More
Share:
Tags
Cite this document
(“Contracts in Business Essay Example | Topics and Well Written Essays - 2500 words”, n.d.)
Retrieved from https://studentshare.org/law/1392921-contracts-in-business
(Contracts in Business Essay Example | Topics and Well Written Essays - 2500 Words)
https://studentshare.org/law/1392921-contracts-in-business.
“Contracts in Business Essay Example | Topics and Well Written Essays - 2500 Words”, n.d. https://studentshare.org/law/1392921-contracts-in-business.
Comments (0)
Click to create a comment or rate a document

CHECK THESE SAMPLES OF Contracts in Business

On the other hand, these globalization standards are opposed by some critics and argue that globalization does not have to be a requirement for putting up a business in other countries, thus it is just a choice for entering a foreign market. Accordingly, standardization is applicable specifically to high-end markets and with accord to the market segmentation such as the trends that the young people patronize (Mullman, 2006) Regardless of the idea that globalization is mostly based on how the company standardizes the products, the home country still holds the profitability of the business as the economy affects how the foreign investors and other national sources back up the business (Stiglitz, 2006).
Making the world flat mak...
9 Pages(2250 words)Assignment
sponsored ads
Save Your Time for More Important Things
Let us write or edit the essay on your topic "Contracts in Business" with a personal 20% discount.
GRAB THE BEST PAPER

Let us find you another Essay on topic Contracts in Business for FREE!